New MacBook Air vs. the competition: by the numbers

Apple's just upgraded it's MacBook Air line with nifty retina displays and Ivy Bridge cores, but how do they stack up to competitors?

Share All sharing options for: New MacBook Air vs. the competition: by the numbers

Apple's just upgraded it's MacBook Air line with speedy SSDs and Ivy Bridge cores, but in terms of overall specs, it's a mixed bag when comparing to the competition. Apple has brought the Air line at least up to par on the processing front with top-of-the-line ultrabook competitors that have recently adopted Intel's 3rd-generation Core i5 and i7 chips. The 13-inch Air's base clock speed of 1.8GHz looks nice against the competition, with competitors like the Envy Spectre XT following closely behind at 1.7Ghz. The new Air also reaches parity with competitors at the high-end, with an Intel Core i7 clocked at 2GHz — speed that matches the Spectre XT. Apple is also fairly close to its competition in the memory department, with most models featuring 4GB of DDR3 RAM as a basic option. Where Apple really pulls away in the performance department is in storage, with a competitive 128GB SSD standard, and an impressive 512GB SSD high-end option.

Things are a little more disappointing on the display front, which Apple has opted to keep consistent with last year's specs — but that stagnation has caused it to fall behind competitors. Several new high-end ultrabooks exceed the MacBook Air's resolution of 1440 x 900 px, with the Lenovo ThinkPad X1 containing a 1600 x 900 px display, and the Asus Zenbook UX31A offering up to 1920 x 1080 pixels within a 13.3-inch display. When it comes to graphics power, Apple and its competition are mostly on level ground, with most high-end slim laptops opting for Intel's integrated HD Graphics 4000 chip.

In terms of connectivity, Apple is ahead in some areas, but lacks some diversity in comparison to Ultrabook competitors. The 13-inch MBA features two USB 3.0 ports, and single Mini DisplayPort and Thunderbolt ports, but unsurprisingly, lacks ethernet and HDMI connections offered by competitors. The new MBA matches its competitors with standard wireless connectivity options, including 802.11n/g/b/a and Bluetooth 4.0.

Be sure to check out the full head-to-head comparison in the Verge's product database by clicking on the image below, and be sure to let us know how you think Apple's new featherweight models stack up to the array of Windows options heading to the market. 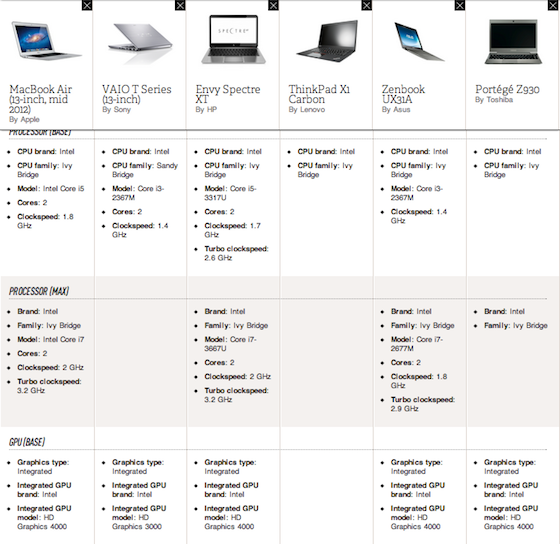