OS X 10.8 has some new features since we last saw it: PowerNap silent updates, a new mute switch for notifications that lets you work in peace, and dictation, which lets you talk to type anywhere in the system.

Apple just announced that OS X 10.8 Mountain Lion will cost $19.99 when it's released in July, and users can upgrade from both Lion and Snow Leopard. Customers who buy new Macs from today on will receive free upgrades.

Most of of the details of the new OS are the same as in the preview build we saw in February, there are some new features: a new silent-updating system called PowerNap, a mute switch for notifications that lets you work in peace, and dictation, which lets you talk to type anywhere in the system.

There's also new Facebook integration, to go along with the Twitter integration already in place: you can post to Facebook from throughout the system, contacts and calendar with sync, and you can Like and see who's Liked items in iTunes and the App Store.

PowerNap is the most interesting new feature — it updates the system while it's asleep. App Store apps, system updates, and backups can all be handled while asleep, and Apple says it's "power efficient," so it shouldn't take a toll on battery life. It only works with the second-generation MacBook Air and the new Macbook Pro with Retina Display announced today.

Developers will receive a "near-final" build of Mountain Lion today, and we'll be digging for all the additional info we can find. Stay tuned. 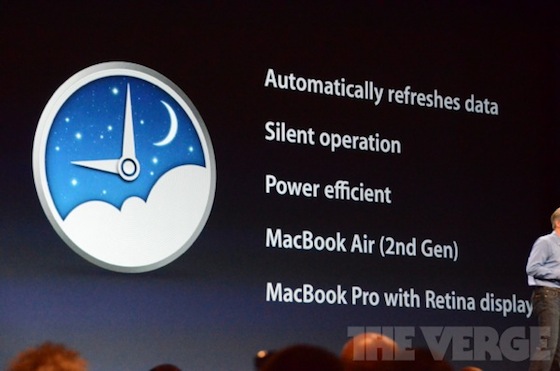 Developing. Check out our Apple WWDC live blog for the latest updates!