Apple has announced a partnership with several auto manufacturers to include support for "Eyes Free" Siri. The first models should be available within the next 12 months.

Apple has announced partnerships with auto manufacturers to integrate a new "Eyes Free" Siri feature to their cars. The new feature allows drivers to use the dictation and search features of Siri without taking their hands off of the steering wheel — for example, you could send a tweet with the new version of Siri without looking at the screen, and you would only have to press a button on the car dashboard to activate the talking assistant. Apple emphasised that the screen will remain off in "Eyes Free" mode to prevent distractions. BMW, Mercedes, GM, Land Rover, Jaguar, Audi, Toyota, Chrysler, and Honda were announced as partners that have already agreed to include the new feature, and the first cars with "Eyes Free" Siri are said to be available within the next year. From the one photo that was shown, this is not a custom "Siri Button" that you're going to see in the next 3 Series — it's just new support that uses already built-in general voice-activation buttons, like the one shown above from BMW iDrive. Additionally, the feature doesn't truly integrate, as you'll still need to have your iPhone mounted in the car. 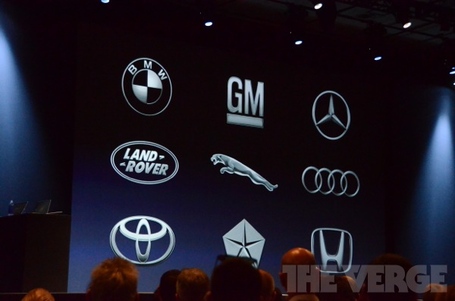 More from this stream iOS 6: everything you need to know