Will Huawei's first international superstar smartphone leave the world with a taste for more?

Huawei who? That's the question many English-speaking smartphone buyers might ask upon reading the company's logo. While Motorola, Nokia, RIM, Apple, HTC, and Samsung have each risen to prominence as premium handset manufacturers, Huawei is still relatively unknown, but the Chinese firm is dead set on changing that as soon as history will allow. Last year, Huawei's Ascend became one of the first smartphones to bring quality below the $100 price point, and now it's shooting for the stars: the Ascend P1 S might just be the world's slimmest handset at 6.68mm thick, and the Ascend D Quad has a home-baked processor that rips through benchmarks.

If first impressions are important to you, though, you'll want to pay close attention to what we're reviewing today: the Huawei Ascend P1, a thicker version of the P1 S that's first out of the gate. It won't set speeds and feeds records like its forthcoming cousins, but a dual-core 1.5GHz processor running Android 4.0 on a 4.3-inch Super AMOLED screen is nothing to sneeze at last we checked. Besides, how many smartphones let you turn off their manufacturer's potentially annoying UI at the press of a button? Read on.

What a difference a couple of years make. When HTC's HD2 first brought the 4.3-inch screen size to market, it would stretch out the pockets of your jeans, but the 7.69mm thick Huawei P1 can slip into a pair of suit trousers, a shirt pocket, or even a lady's clutch, all with relative ease. Due to primarily plastic construction, it's a featherlight handset too, weighing just 3.88 ounces (110g) and helping to ensure you won't notice it when it's there. Then again, if polycarbonate phones aren't typically your preference (perhaps you enjoy a reassuringly solid metal build) you'll find the Ascend P1 even more unbearable than the usual plastic phones sold.

While the front of the device is mostly just a sheet of Gorilla Glass, the back is a glossy plastic shell that feels hollow and rather cheap, and whose lack of distinct texture means it ranges from sticky to slippery depending on how much finger oil you grease it with. That inexpensive feeling ranges to the buttons and port covers on the device as well, including a 3.5mm jack, SIM card slot, and Micro USB port up top, a volume rocker on the left edge, and the power button on the right, directly above the microSD slot. The physical button layout works quite well actually, and is nicely ambidextrous, but none really have a satisfying, solid press. Though I appreciate accessible ports on the outside of the device, the doors are attached by those tiny little rubbery pins that threaten to break off, and neither seat quite firmly in the sides of the device. The P1 relies on dedicated capacitive buttons near the bottom edge to the screen, too, which just don't work well in their position: I'd often need to press something near that edge of the display, and wind up touching the Home button by accident, losing my progress at least temporarily. 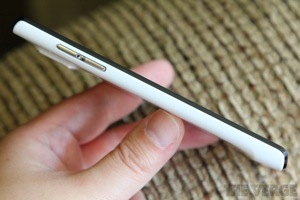 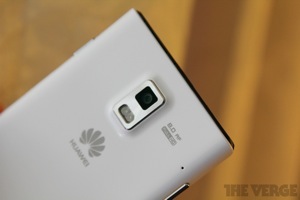 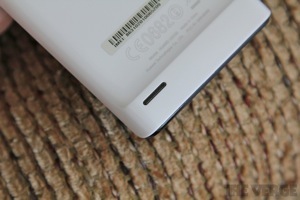 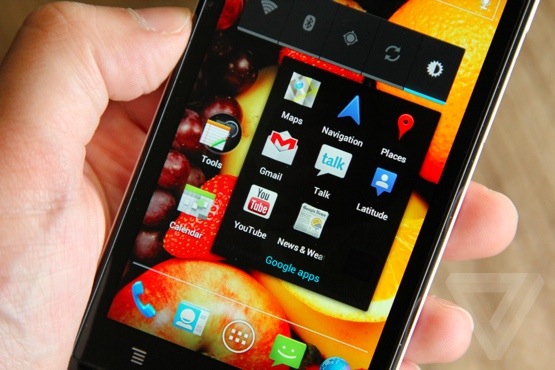 The Huawei P1's 4.3-inch qHD Super AMOLED display is another mixed bag, but it's mostly pretty good: the screen is bright, extremely colorful, has excellent viewing angles, and those deep, deep blacks that come from using organic pixels rather than a backlight to selectively illuminate the screen. Some of my colleagues might tell you that colors look oversaturated, and they probably do, but I like the effect. The problem that we almost all agree on, yet again, is that Huawei's using a display with a PenTile matrix. The technical explanation has to do with using a star-like arrangement of sub-pixels to make up the dots on screen rather than neat rows from top to bottom, and with two green sub-pixels for every red and blue. The actual result is that images, icons and text appear to have jagged edges, and whites can look green up close. The effect diminishes a bit the higher your screen resolution, but at 960 x 540 and 4.3-inches, it's quite noticeable if you have an eye for such things. It's a pretty decent screen, really, but there are far better ones, including Samsung's Super AMOLED Plus displays, and the 1280 x 720 resolution screens that are gradually getting integrated into top-tier smartphones these days.

One tentatively welcome surprise, though, is just how much audio the Ascend P1's speaker can pump out. Huawei has licensed Dolby Mobile audio software for the Ascend P1, and while I've always been a bit skeptical about the value of such software, this particular phone shows my concerns were not wholly accurate. Without Dolby processing turned off, the phone sounds even poorer and quieter than most (almost suspiciously so) but with it on, the Ascend P1 produces something of a Jawbone Jambox effect: it's hard to believe there's that this much sound can come from that tiny speaker.

Before you run out and buy one based on the strength of the audio, though, know that Dolby Mobile only seems to work in Huawei's music app. When listening to the exact same tunes in Google Music or playing from a Flash video in the browser, it sounded notably worse than my Droid 4, which doesn't have such a great speaker itself. 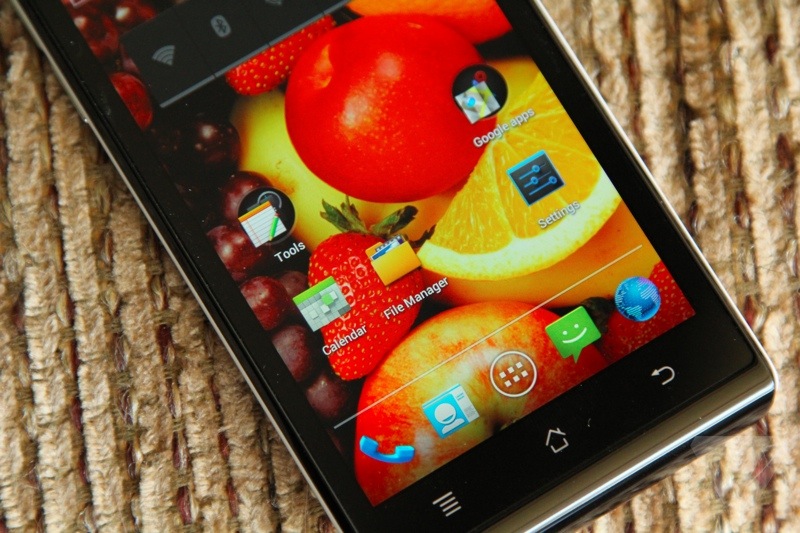 Cell phone manufacturers and carriers can be notorious for filling their devices with bloatware and cruft, but the software that ships on the Huawei P1 is the best compromise I've ever seen between stock Android and the company's apparent need to show off. It's not that the Huawei P1 doesn't ship with an overly flamboyant skin — oh, it does — but rather that at any time, with just two presses, you can turn it off completely. Huawei's "3D Home" is a rotating carousel of three-dimensional graphical UI elements that look cool the first time you see them, but it's a noticeable drag on performance when you try to scroll. Hit the Menu key and the "2D Home" button, however, and the every last bit of it gets replaced with the familiar Holo themes of Android 4.0. It's a very elegant solution.

Also, where many phones come with a mishmash of flavor-of-the-day software, Huawei's preloaded only a handful of apps that you're likely to actually use, including Polaris Office, a handy flashlight app, a sound recorder, a one-click app sideloading tool, and a file manager that automatically sorts your phone's content by type and lets you swap items between the internal 2GB storage and your SD card. If there's a sore spot, it's Huawei's virtual keyboard: the stock IME oddly places the switches between letters and numbers on the opposite sides of the screen, and depending on the text entry field, you don't always have access to the spacebar. Android 4.0's standard touchscreen keyboard is buried in the settings menu if you need it, though, and I found myself switching to it after just a couple days with the phone.

As usual, it's also probably worth mentioning that Android 4.0 is a giant leap ahead of previous versions of the operating system when it comes to phones, not only for the myriad improvements to the UI, multitasking, copy/paste, Gmail, Google Calendar, and more, but also access to exclusive downloadable applications like the excellent Chrome Beta browser. 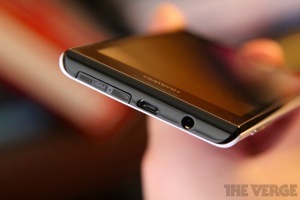 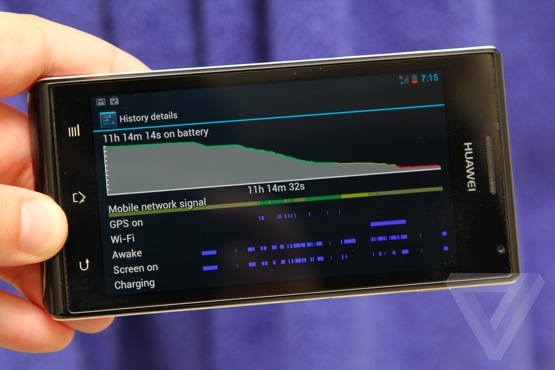 The Huawei P1 is equipped with a dual-core 1.5GHz TI OMAP 4460 chip with PowerVR SGX 540 graphics on board. That's the same silicon as Samsung's Galaxy Nexus, but with a 300MHz speed bump and without the extra real estate of a 1280 x 720 screen, it absolutely screams through the Android 4.0 UI and more than holds its own in benchmarks. The screen is exceptionally responsive to touch, and the software keyboard in particular can feel like it's reading your inputs before your finger actually touches down, and games… well, Shadowgun is pretty playable, but the SGX 540 is starting to look a little long in the tooth.

Better yet, the 1800mAh 1670mAh battery that Huawei crams into the P1's larger frame can last a good while while. With a full day of moderate to heavy use, the P1 made it over eleven hours on a charge, and on a different day, with lighter use and a good bit of idle time, the device saw fully 26 hours before I felt compelled to plug it in again.

Update: Huawei tells us that the P1 battery's size changed before it shipped, and the final phone, which we reviewed, has a 1670mAh pack rather than the 1800mAh battery originally promised.

On AT&T's HSPA network in San Jose, California, call quality and data speeds were about what we'd expect (often a little spotty and slow), but we actually had an easier time of holding onto a cellular signal than a neighboring iPhone 4. When it came to Wi-Fi, interestingly, the result was reversed, with the iPhone and other devices managing to latch onto access points that the Huawei couldn't see to begin with. Can't win 'em all, I suppose. 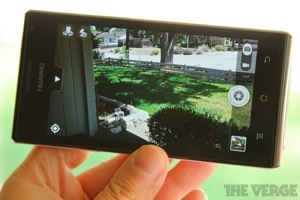 If you set up a shot just right, with plenty of light, manually tapping to focus and holding really still, the P1's f/2.4 8-megapixel camera can take some pretty decent, above-average photos for a phone. It just doesn't as a general rule. Even in the best possible conditions, I wasn't able to zoom very far into our images without encountering noise, and under low-light circumstances the P1 struggles to avoid splotches and the like even when viewed at lower resolution. The camera also isn't terribly good at focusing on a wide or low-light scene, the white balance gets tricked easily indoors, and if you take a picture of a white surface, you can expect a red blotch in the center.

Yet, despite all that, the camera's pretty fun to play with on the go, as the software is loaded with options and a variety of filters (including the lovely Take On Me-esque pencil sketch mode). While it's not quite as intelligent as the software shipping on HTC's latest crop of handsets, the Group mode takes five pictures in a row and lets you pick the best result, while the Burst mode shoots ten rapid-fire shots in a row to give you a veritable stop-motion animation (again, imagine Take On Me and the possibilities there).

Unfortunately, if pictures are above average, video is a little below: 1080p footage simply doesn't look high-definition. Here's a brief sample:

Above average isn't good enough in lands with carrier subsidies

Huawei's Ascend P1 isn't a universal success, but its failings are few: in almost every way, it's well above average, and I'm positively enamored of the way Huawei makes its custom skin an opt-in / opt-out proposition. If you live in the United States, though, the P1 may be a moot point: Huawei tells us it hasn't decided yet whether the $500 off-contract phone will ever land stateside. Still, with a classier rear chassis, a better screen, and maybe some LTE connectivity, I think Huawei could play in the big leagues after all. Here's looking forward to that in the company's future phones, and for Huawei not to screw it all up by getting all emotional.