Microsoft's riskiest Windows 8 could be its reliance on third-party hardware manufacturers. Was Steve Ballmer right in calling it a risky product?

Microsoft has laid down the foundations for what its CEO, Steve Ballmer, once described as the company's "riskiest product bet." Many Microsoft watchers assume that Metro style apps could be the tough sell for Windows 8, but what about the companies that create the hardware Windows runs on — aren't they the riskiest aspect for Microsoft towards its Windows tablet adoption?

Apple’s iPad (including the discounted, best-selling iPad 2) has had very little credible competition from the likes of Android tablet makers, who have struggled to compete on price and hardware quality. The majority of these same manufacturers will be responsible for building Microsoft's Windows 8 ARM (Windows RT) tablets. 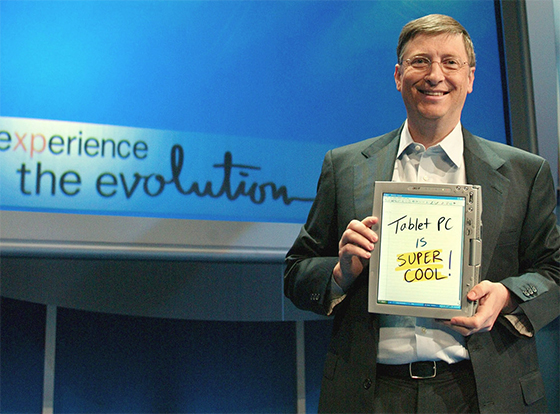 Back in 2002, Bill Gates's original vision and launch of tablet PCs made headlines but never took off as a popular choice for consumers or businesses. At the time, Microsoft's focus on pen-based computing in Windows XP Tablet PC Edition and Windows Mobile cost it dearly in the mobile race, and OEMs were unable to produce hardware that was comfortable to hold and touch. The selling point of Microsoft's original hybrid tablet PCs was its ability to let users work on a keyboard and also produce handwritten notes — something we're seeing a decade later with Windows 8.

Microsoft champions its Windows OEMs, proclaiming that choice is best for consumers and a wide range of hardware will suit everyone, but this open ecosystem could damage Microsoft's tablet success. The same OEMs who have supported Microsoft's Windows operating system over the years have also contributed to some bad consumer experiences through a clutter of pre-installed software such as browser toolbars, 30-day antivirus promotions, and time limited promo apps. Some OEMs have started to move away from this approach, but a quick glance inside a retail store still reveals countless cheap Windows systems burdened with unnecessary software.

It's not just software; the hardware side isn’t a sure bet for success either. While Asus and others have released Android 4.0 tablets, the price of such hardware hasn't dramatically undercut Apple's iPad. Cost is an essential element for Windows 8 to thrive in the tablet world, competing against a $399 iPad 2 and rival Android tablets. However, cost alone won't seal a sale for the average consumer, the look and feel of a device and its functionality is the key selling point. Asus was the first — and so far, only — to announce a Windows RT consumer device at Computex recently, giving us a glimpse at the type of hardware we'll see directly competing with the iPad. Other manufacturers like Toshiba, Samsung, and Lenovo were also playing their Windows 8 tablet specifications close to the chest. The trio revealed prototype and concept tablets, but refused to go into detail on specifications and expected release dates. 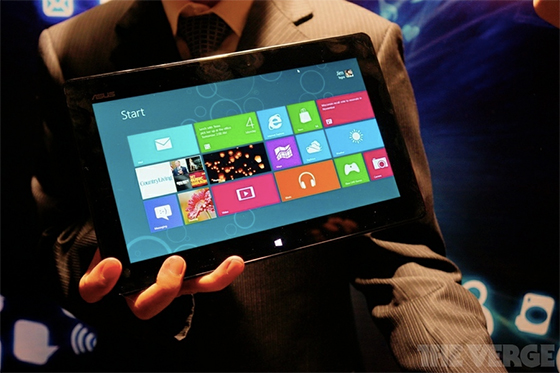 The lack of Windows RT tablets at Computex is alarming considering they're expected to be available in stores in a few months. Windows RT tablets, running on ARM processors, have a number of advantages over their Intel counterparts — including low power drain, low heat generation, and a bundled version of Microsoft Office 15. Windows 8 is near-final and obviously not complete yet, so there are bound to be some optimizations required across the various ARM chipsets, but Microsoft and its OEMs have continually been cautious about showing any Windows ARM-based hardware. Microsoft previously promised that developers would get access to "a limited number of test PCs" with ARM chips for testing at Release Preview, but it's unclear whether any devs have been able to take advantage of this offer yet. Seeing a lone Windows RT device announced at Computex, we question whether OEMs are serious about Windows RT as a tablet operating system, especially with Microsoft now pushing a desktop / Metro hybrid for its more traditional x86 machines.

Microsoft has hinted that Windows 8 will hit Release to Manufacturing (RTM) over the next two months, a date that could result in Windows 8 machines hitting the market in October. The company has also expressed that its goal is to ship Windows RT devices running on ARM chipsets at the same time as traditional Intel-based Windows 8 hardware. We've heard reports that Microsoft is strictly controlling Windows RT, from OEM selection to device hardware — a process that could reflect the company's quality concerns over OEM Windows 8 tablets. Whether an OEM, like Nokia, steps forward within the next few months to produce a winning Windows RT tablet with great battery life, hardware, and industrial design, remains to be seen — but Microsoft is clearly positioning Windows RT as the choice for iPad competitors.

When will we see Windows 8 tablets in stores?

What we've seen so far suggests that neither OEMs nor Microsoft have anything that can compete with the iPad on wow factor or affordability just yet. Instead, there may be a mix of tablets, ultrabooks, and hybrids (a throwback to 2002) running Microsoft's new operating system — offering what OEMs and Microsoft would call an alternative to the iPad. Apple's scale affords discount prices on bulk components, while its deft management of its largely Chinese supply chain keeps operational costs to a minimum. Lacking these advantages, Microsoft's partners seem unable to match Apple in terms of price and quality — foregoing one fundamental for the other. In this way, Microsoft's breadth of OEMs are a disadvantage, as they compete against each other for razor-thin profit margins. 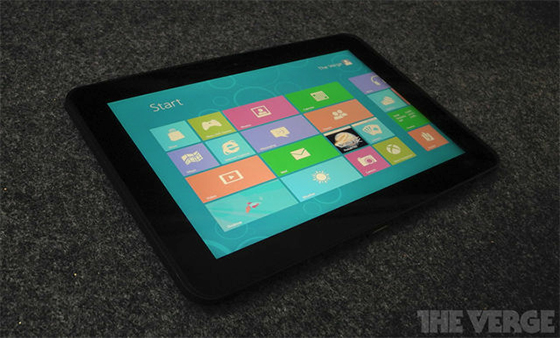 This iPad alternative could be exactly what consumers want, a mix of work (desktop) and play (Metro) apps in one hardware form factor that supports tasks such as USB drive storage or Microsoft Office. Although, it would have to come packaged into lightweight, powerful, and well-designed hardware at a competitive or low cost — a risky Windows 8 OEM bet that helps you understand why Microsoft is attempting to control the Windows RT side as well as it can. If OEMs flood the market with cheap x86 Windows 8 tablets, then, like netbooks, this may increase market share — but at what cost to the end user experience of Windows 8? Ballmer was right that Windows 8 is risky, in more ways than one.