V-Moda's three-in-one solution is aimed squarely at the audiophile crowd.

Early last month, V-Moda CFO Val Kolton stopped by The Verge offices with his company's latest gadget: an iPhone case that combines a high-grade headphone amplifier and digital-to-analog converter with an external battery pack. As he began describing Vamp — which has officially launched today to the tune of $650 — Kolton made it clear this isn't a mainstream-targeted product. Not by any stretch. Rather, the case has been designed for "audiophile" iPhone 4 / 4S owners.
"It's a connoisseur product," he said. And that's a crowd he's familiar with; Kolton and V-Moda keep an active presence on the forums at Head-Fi.org, a community that has evolved into one of the web's preeminent resources for all things headphones. Members there have been closely tracking the development of Vamp over the past several months. Yet as its release has drawn closer and new details have been revealed, some of that anticipation has shifted to disappointed — often in reaction to Vamp's stratospheric MSRP. Does a $650 device with such a niche audience have any chance at success? We can't predict the future, but we do have some impressions to share.

"The amplifier on the iPhone just isn't sufficient." Val Kolton said those words during our meeting, but the sentiment behind them has been around for years now. Apple's portable devices have long been notoriously mediocre when it comes to powering (or "driving") high-end reference headphones. Often the preferred solution among audiophiles is to purchase a standalone external headphone amplifier, which can call for some DIY ingenuity if you want to carry both devices together on the go. V-Moda opted for a different route with Vamp, building a form-fitting design around the iPhone 4 / 4S hardware. Kolten cited the worldwide distribution and install base of Apple's handset(s) as the reason behind the venture. That's not to say he doesn't realize it's a controversial choice. "Android fanboys and Archos guys will want us to make one that isn't just for the iPhone."

A DESIGN GUARANTEED TO DRAW ATTENTION

This isn't your standard-issue iPhone accessory, and we'll leave it up to you to decide whether that's a good or bad thing. Fused with the aforementioned silicon case is a metal rear section that contains Vamp's audio components. A volume dial is situated up top along next to a three-way toggle that cycles through Vamp's various operating modes. Here you can either choose to use the case as a headphone amp only or simultaneously enable a non-removable 2200 mAh battery pack that will charge your iPhone during use. In our experience, this battery managed to refill our iPhone's battery meter almost completely, though the luxury drastically cuts down on Vamp's regular seven to eight hours of playback time. The headphone port serves double duty as an optical audio output, preserving the same high-fidelity audio experience should you connect the device to a stereo or home theater setup

Vamp might not be the worst looking iPhone case we've seen, but it's hard to ignore some questionable design decisions on V-Moda's part. For instance, the silicon and metal portions of the product are divided by a red, sparkle-laden stripe that instantly kills any sense that you're holding a premium, audiophile-grade device. The metal and internal components also add significant heft to your iPhone, not that anyone was planning on buying this for its sleek dimensions. 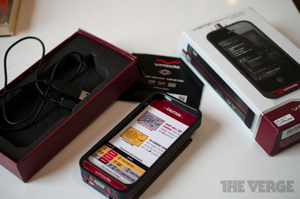 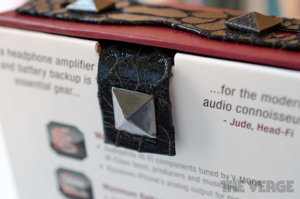 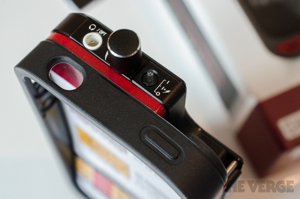 One of the most important elements of Vamp is something you'll never see. Inside the case's metal shell is a digital-to-analog converter (DAC) which pulls in audio from your iPhone's dock connector rather than the headphone jack to maintain maximum sound quality. (Music is processed by the phone's own audio chips when you're listening through the 3.5mm jack.)

When you're finally ready to hit play, there are two available listening modes. "Pure" offers a neutral soundscape that aims to stay true to the original recording, while "VQ" is an option better suited for those who prefer punchier audio. The latter also adds a 3D spatial soundstage that can improve your sense of immersion when dealing with certain genres like jazz and classical music.

But is it worth it? Does Vamp dramatically alter the way you listen to your music? Not exactly. We went through several lengthy listening sessions with the device, sampling a variety of earbuds and headphones along the way. Vamp certainly brought about some tonal improvements on the Apple Lossless tracks we tested, with everything sounding a bit warmer and better balanced. The headphone amp feature works as advertised, with Vamp providing more than enough power to drive any hi-fi headphones you might own. Of course, what you get out of it largely depends on what you put in. Using this product with anything other than a lossless music library would be a colossal waste of time and money.

Even then, it's incredibly hard to get past Vamp's $650 asking price. And that appears to be a concern shared by the Head-Fi community, many of whom are already asking for a more affordable, universal headphone amp. As it stands now, you'd get just a few months to enjoy Vamp before Apple's next iPhone is expected to hit shelves. Kolton doesn't seem particularly worried about the looming obsolescence, believing that Vamp will make for a nice way to squeeze additional life out of your iPhone 4 or 4S hardware in the months and years to come. And if that's not enough to sell you, keep in mind that V-Moda is only just getting started in this space. "I think this is a first step in a pretty revolutionary direction," he says. "It's just the beginning." Ultimately, its first attempt may be destined to remain a luxury item for the audiophile with cash to burn. 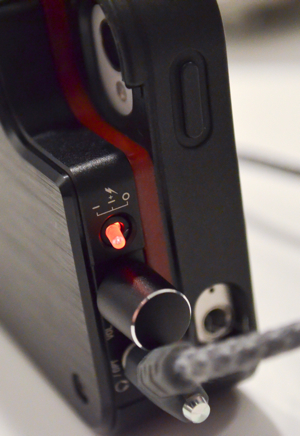