Chrome vs. Safari browsers on the MacBook Pro's Retina display

Share All sharing options for: Chrome vs. Safari browsers on the MacBook Pro's Retina display

Apple's new MacBook Pro with its Retina display is undoubtedly a breakthrough for laptops, and certain notable third-party apps have already been updated to take full advantage of the expanded resolution. However, unlike the comparatively seamless leap to Retina displays made by the new iPad and the iPhone 4, it looks like OS X apps will need specific upgrades to see any advantage from the MacBook Pro's screen.

You might find yourself switching to Safari for a while

While iOS automatically renders text and many other standard UI elements at Retina resolution, many apps currently look distinctly blurry on the new MacBook Pro's display — we've been a little disappointed with how Google's Chrome browser, the Steam client, and the Kindle app all look on our review unit, to name three. However, other third-party apps such as Alfred and Notational Velocity render text well at a higher resolution. Of course, it probably goes without saying that all this is likely a short-term problem, but it's nevertheless something to bear in mind before you get in line at the Apple Store this morning. If you're a Chrome user, you might find yourself switching to Safari for a while until Google issues an update, or at least playing around with the scaling settings (with possible compromises in performance).

To get a better idea of the difference in resolution ahead of our full review of the new MacBook Pro, check out this high-res screenshot of Chrome next to Safari, taken at the default "Best (Retina)" scaling setting. 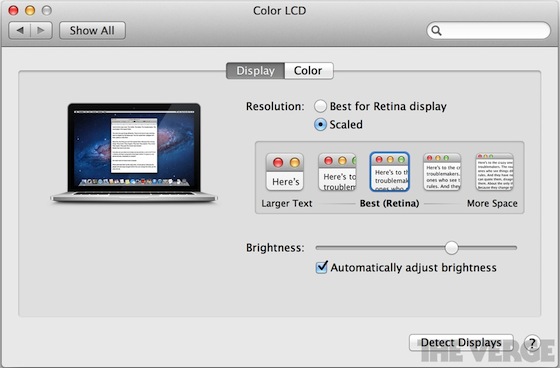 Update: According to Anandtech, Google's Chrome Canary browser renders at high resolution on the Retina display. This is a developmental build of Chrome that may not be feature-complete or fully stable, but it could be a useful stopgap for those waiting for a Retina update to Chrome proper.