Microsoft demonstrates an Office 2013 RT edition at its Tech-Ed keynote.

Microsoft's second Tech-Ed 2012 keynote mainly focused on Windows 8, but the company revealed a new edition of Microsoft Office: Office 2013 RT. Briefly demonstrated at the conclusion to the keynote, the naming appears to confirm rumors that Microsoft will opt for a 2013 release of its next Office suite. A Metro style logo for Office leaked earlier this week, hinting at a rebrand of Office to keep it inline with the company's Metro vision. The logo formed part of a setup program for what was described as a "2013 Preview" installer of Office. 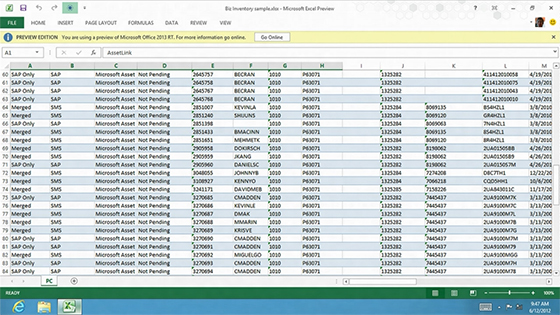 Microsoft has been publicly quiet about its Office 15 (Office 2013) plans, but the company has previously promised a public beta in the summer — one that's widely expected to arrive later this month. Early builds of Office 15 include a number of improvements and enhancements across each core application, with a Reading Mode and fullscreen feature designed to flatten areas for easier touch navigation on Windows 8 tablets. Microsoft's Office 2013 RT edition will be bundled into an upcoming version of Windows RT, designed for Windows 8 ARM-based tablets.