Amazon Cloud Player for iOS hands-on: the war for your music heats up

Amazon Cloud Player for iOS hands-on: the war for your music heats up

We spent some time with Amazon's Cloud Player for iOS, and found a solid alternative to iTunes for your iPhone.

We spent some time with the app, and though there's not much that's surprising or groundbreaking about it, it's a really solid music effort, and coupled with Amazon's huge music store does seem to make for a viable alternative to the iTunes ecosystem. The Cloud Player app is aesthetically much like the Kindle app for iOS: lots of dark grays and blacks, with mostly text-based menus. 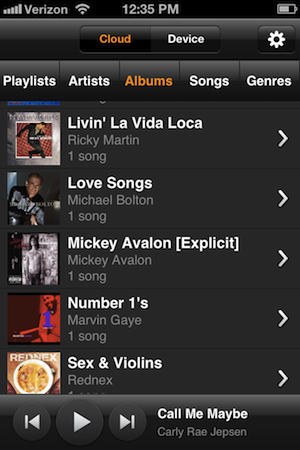 You can sort your music by "Cloud" and "Device, showing you what's available for streaming or for local playback — the app also pulls from your pre-existing library, so if you downloaded music from iTunes it'll show up in the Cloud Player app. It's a nice way to see at a glance what's available offline, but it also frustratingly segments your music — you can't search through both libraries at once, and sorting by album or artist only shows what's available in the place you have selected, which means if you have a big local library and an Amazon library it can be hard to find the music you're looking for. Amazon could fix this problem by uploading your local music to the Cloud Player, but that's not possible in the app.

The player itself is simple, dominated by album artwork and offering just basic controls like shuffle and repeat. Controls are available on the lock screen or the multitasking menu, just like with any other iOS music app. Unfortunately, there's no gapless playback even for local files, so you get a couple of seconds of awkward silence between every song.

The app's really stable and usable, even at version 1.0, though there are a few important things missing. You can't buy music within the app, and there's not even a link to a web store; you also can't create a Cloud Player account in the app, though that's done for you the first time you buy music from Amazon. Those both seem to be based on Apple's requirements (and that 30 percent commission Apple takes), but they're frustrating omissions that make it harder to completely replace iTunes with Amazon — it's just easier to buy music on your iPhone through iTunes. If you do buy music, it shows up quickly in the Cloud Player app – it refreshes automatically every ten minutes, or you can refresh manually.

Amazon's mobile strategy is an aggressive one, and between Kindle and Cloud Player the company's inching ever closer to obviating the need for iTunes and making Amazon your one place for buying content of any kind. Of course, we don't expect Amazon to release the Appstore for iOS anytime soon, but it's still a more compelling alternative iOS ecosystem than ever.