"Think about the mountain," says AMD's John Taylor. He's talking about ultrabooks. "As you get up to $799, $899, $999, you've got 50 SKUs sitting up here, at this place. They're going to fall off." He shapes his fingers into a pyramid, so I can visualize the metaphor.

The fact that Intel has over 110 design wins for its proprietary laptop platform doesn't seem to phase AMD's director of product marketing very much. In his estimation, Intel's ultrabook initiative isn't just driving quality, it's forcing a homogenization of the laptop market that might leave their manufacturers out in the cold. "There's not room on the shelf to differentiate 50 Intel ultrabooks, particularly if they're called Intel ultrabooks," he says, and I start to wonder if he might have a point.

When I've reviewed recent thin laptops myself, the key differences have almost always been the quality of the keyboard, touchpad, and screen &mdash; none of which usually appear on a spec sheet.

Over the course of an hour's conversation with John Taylor, though, I begin to worry if AMD might have an even harder time improving laptop quality than its rival Intel.

At Computex 2012 in Taipei, Taiwan last week, crazy ultrathin laptop designs were the talk of the town. Intel had literally dozens of ultrabooks to show off, many with clever flipping screens or detachable tablet modes. Here are just a few. Most ran Windows 7 or the Windows 8 Release Preview on Intel chips, though a couple were ARM-based systems running Windows RT.

What you'd have a hard time finding was an exciting laptop with AMD silicon inside. The company did have three laptops that looked ready to compete with Intel on thinness, but two of them were the same exact designs: the HP Envy 6 and the Samsung Series 5 Ultra, which were built to be Intel ultrabooks before AMD had the chips ready for primetime. The third did indeed embrace the Computex spirit, a transforming Windows 8 tablet with keyboard dock that measured under 20mm thick, but it was a prototype from Compal, a company which creates laptops but doesn't sell them to consumers abroad.

John Taylor gave me a lot of reasons why AMD didn't make a splash at Computex, and some of them make good sense. Mainly, the new ball grid array (BGA) version of its 17-watt Trinity chip 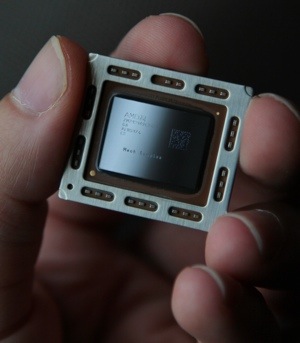 (which can be soldered directly onto a motherboard to save space) didn't start shipping until just a few weeks ago.

Moreover, AMD didn't have a BGA product to compete with Intel's Sandy Bridge last generation, and a lot of the Ivy Bridge designs we saw at Computex were built with Intel's earlier platform in mind. In other words, Intel has a huge head start.

Taylor blames the timing, too: "The retail cycles all don't cleanly align around Computex, so that's another key point to consider, and then some of our OEMs are specifically building for Windows 8," he told me. When we started the conversation, though, Taylor's very first point was about the nature of Computex itself: how Computex generates a lot of buzz but the trends seen here don't necessarily mesh with reality.

"About four or five years ago it was MIDs &mdash; mobile internet devices, do you remember that? &mdash; every headline out of Computex was MIDs. The next year it was netbooks &mdash; "Oh my gosh, netbooks, it's going to kill Intel and AMD's traditional business, why doesn't AMD have more of a netbook business, it's horrible AMD that you don't have more netbook designs, everybody's going to want a netbook." Then the year after that it was consumer ultra low voltage. "Oh, this is so great, these BGA things."

While AMD certainly isn't steering away from "those BGA things," as the latest Trinity chip shows, Taylor says that the company has to hedge its bets: it has to find the right systems and sell large volumes at lower prices rather than lead with loads of designs from different OEMs. "We're going to have fewer SKUs than Intel. There's no doubt about that… we can be very strategic about the types of designs we go after, the prices that they're sitting at, and how we train our whole marketing engine on those being commercially successful. If you're AMD, that's how you have to approach that."

But how do you go after original, compelling, marketable designs if everyone's building ultrabooks for Intel? It seems counterintuitive to think that a company can sell in volume unless it either has an extremely desirable product or lots of different products everywhere you look… but not only is AMD shy on designs so far, the early laptops we're seeing just drop in an AMD chip and motherboard into an ultrabook chassis. AMD's low voltage silicon is not only cheaper, it has better battery life, better graphics and cheaper quad-core designs (according to Taylor, anyhow), but on the shelf the machines could look practically identical. 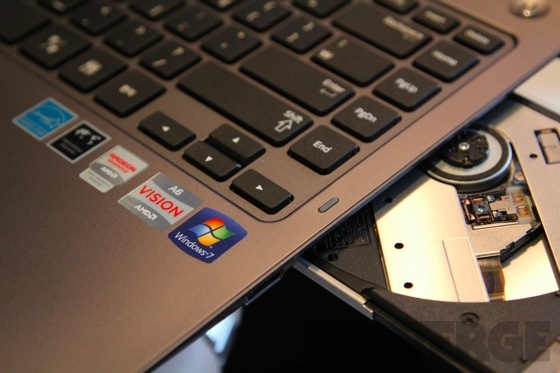 "They won't all be that way," Taylor says, hinting at original designs to come. "We'll have three other premium ultrathins between now and Windows 8, and you'll see another flight of designs at Windows 8." At least one of AMD's Windows 8 ultrathins will have a multitouch 1080p screen, he says, and while the company isn't committing to Trinity tablets quite yet, AMD is strongly hoping that OEMs which see the transforming Compal prototype will be inspired to build machines like it. "Don't think of the Compal as just an interesting thing we did at Computex," he says. Still, Taylor admits that we'll see a lot of the same chassis shared between Intel and AMD going forward.

If Trinity is indeed at parity with Ivy Bridge but cheaper, though — I wonder out loud — why couldn't OEMs improve overall laptop quality by putting that cost savings toward other components like better displays, touchpads, SSDs and build quality? What if you had the choice between AMD and Intel laptops at the same exact price, but the AMD had a gorgeous screen?

"I can tell you from a trajectory standpoint, that's what we're pushing for, because it's in our own best interest," the marketing director says, citing AMD's graphical chops as a great reason to sell higher-resolution screens in particular. When I ask how AMD can actually push OEMs to build those kinds of systems, though, Taylor doesn't have a clear answer, except to say that AMD wouldn't pursue a brand like ultrabook to do so.

"We've been very purposeful about not trying to elevate our role in the industry above our OEMs who are our customers [...] That's not the business OEMs want to be in, where they've got lower margins than their supplier, and their supplier has elevated their brand above them, and neutralized the playing field such that their designs all look the same, and their supplier can pick the winners and the losers. That's a dangerous place to be for an OEM, so we put a lot more emphasis on a partnership and what we can achieve together."

Earlier in our conversation, Taylor pulled out an older Lenovo ThinkPad with a Brazos APU inside. "We dominate this category with Brazos &mdash; this is what the netbook became." The point he's trying to make is this: like netbooks, there's something about the ultrathin laptop that's compelling, but he doesn't believe that Intel's requirements, and the prices they lead to, make sense for the market. "$399 to $499, $499 to $599, even $299 to $399, where our E-Series, and Intel's Pentium and Celeron are: the volumes are there," Taylor says. "They disappear by the time you get to $899, and then they all go to Apple."

What kind of steed could AMD possibly ride in with, though, when its chips are seen as cheap, and when the company seems perfectly happy to pitch them as the low-cost alternative? If a laptop manufacturer chooses AMD in order to build a more profitable laptop, it's hard to expect that same manufacturer to then spend that money on the better screen. Taylor told me that the industry will probably trend towards higher quality as soon as economies of scale are reached, but that could be a ways away: Intel's partners at least appear to be building laptops that people want to buy today.

And what of ARM, which is seen as the low-cost alternative to x86 as a whole, and will compete for the same price points that AMD is targeting?

"We actually believe that anything that disrupts the status quo is very positive for AMD."

Interestingly, Taylor says Intel has more to lose than AMD does. "We actually believe that anything that disrupts the status quo is very positive for AMD. If you think about the ARM value proposition and the things that are implied in the question that ARM could come in and be a meaningful player where people formerly bought PCs, means that right away you jump to an assumption that they have rejected the Intel CPU-centric value proposition."

Of course, the status quo doesn't get dismantled all at once, but Taylor insists that given Intel's dominant market share of 80 percent, it's not AMD that should be worried. When push comes to shove, AMD has and will have better battery life and graphics than Intel at lower price points, he claims, and yet runs the legacy desktop software that ARM cannot.

If you believe Taylor, AMD isn't pinched between ARM and Intel so much as neatly sandwiched on either side.

If you ask me, AMD's rock and hard place is this: the company is caught between computer manufacturers' reluctance to put their chips into truly premium laptops, and its own seeming unwillingness to push for notebooks that deliver the very best.

Either way, AMD isn't necessarily headed for oblivion, even though the financials haven't been great. After all, the company has other sources of revenue and the possibility of branching beyond x86. It's just that when it comes to the laptop space, Intel seems to be slowly scaling the mountain on the OEMs' back, while AMD seems to be hoping that a particularly generous porter happens by with a comfortable walking stick.