It has only been about two weeks since Flipboard for Android was finally released in beta, but the developers aren't wasting any time making improvements to the social reading app. The app received an over-the-air update before it was even fully launched, and now a new version is being pushed out that promises to reduce the memory footprint and improve battery life when using Flipboard. Not the most exciting changes, for sure, but ones that should be welcome to any beta testers who've had issues or are using phones with less memory. There's no new features to speak of yet, but that's not a huge shock for a beta app. Of course, there's also the requisite unnamed bug fixes — hopefully these stability fixes will help bring it closer to a full launch on the Google Play store. For now, you'll need to request an invite to the beta at the Flipboard site if you want to give it a shot. 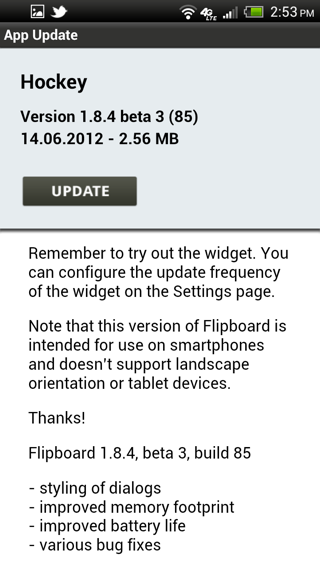