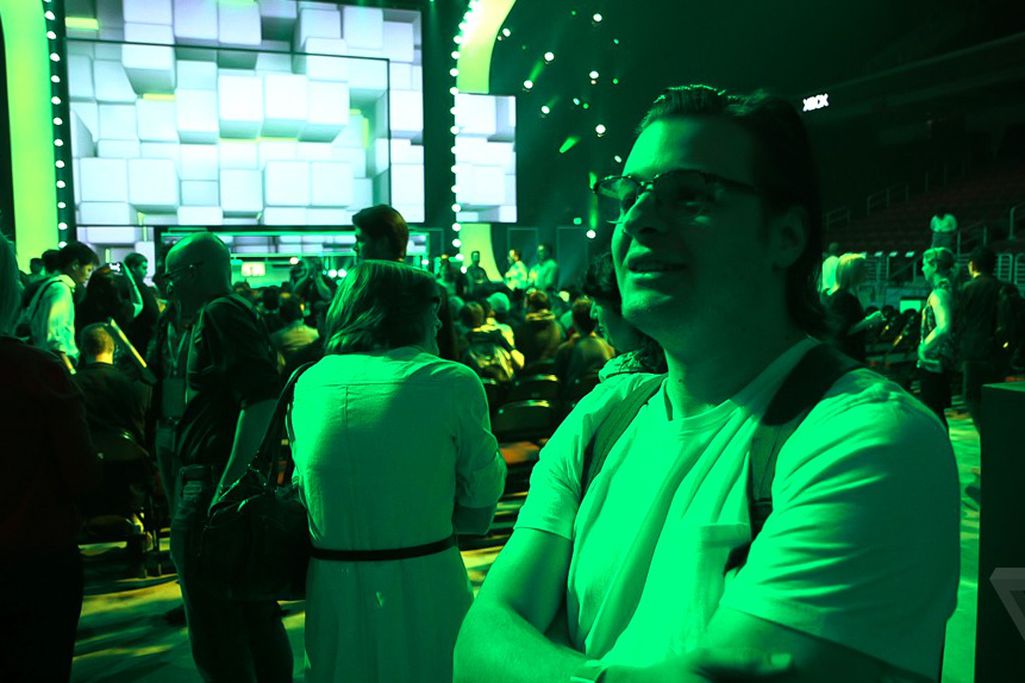 I sat through Microsoft, Sony, and Nintendo press conferences at E3 this year, in that order. The creamy, meat-puree fillings of every keynote are game announcements, which are a mix of long-awaited sequels, short-awaited sequels, and the rare new property from a well-established developer.

Typically, press conferences trace up and down hierarchical trees. You have a mega-exec, who tosses to a minor-exec, who tosses to a studio head, who tosses to a game director who will actually play the game while we watch. The only person in this chain who can speak well, without a script, is the game director, but he always talks the least, because he's capable of speaking literally off-script — a cautionary tale from this year is how South Park creators Trey Parker and Matt Stone stepped without chaperone onto Microsoft's stage and made fun of Xbox SmartGlass while mega- and minor-execs watched in horror from the wings.

To safeguard the company line, huge teleprompter screens are hung in the back of the auditorium, which the execs read off of in a stilted, 3rd grade clip. These teleprompters include dramatic pauses, and are paced so the nervous suit doesn't talk too fast or too slow. Even when Nintendo brought out Japanese execs, who spoke in Japanese, the english "translator" read his "translation" off a screen. 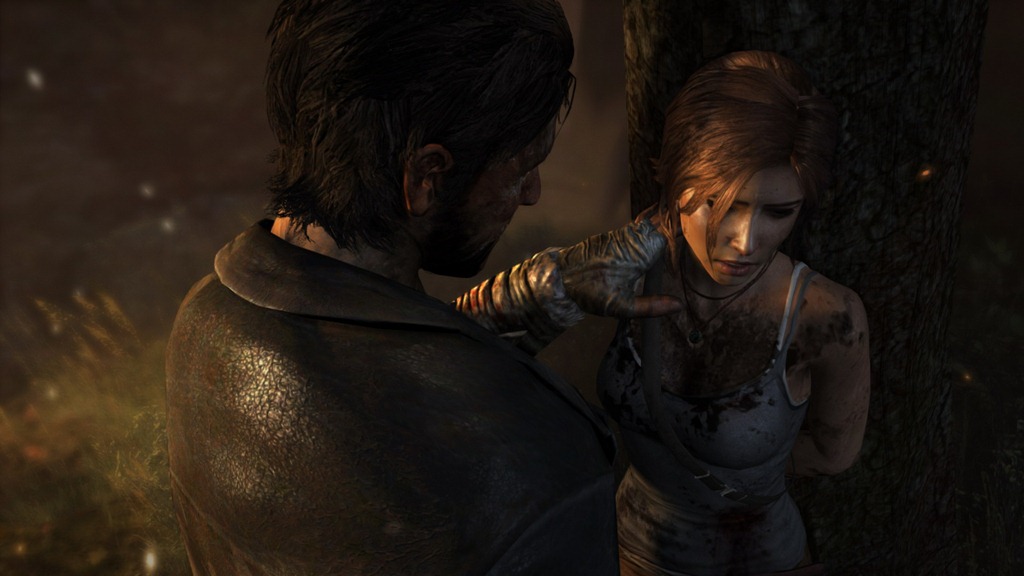 Here are good things to say on stage at E3 if you want to keep your job:

"We have the most passionate consumers in the world."

Inevitably, there are a couple minutes of scripted banter. I transcribed some of these dialogues, so you could get a flavor of this horror, but I've censored the parts that have potential to cause internal hemorrhaging or self-mutilation:

But finally, just before you claw your eyes out from an abundance of on-message joviality, the game director — who has been standing silently, trying not to collapse into tears — grasps his controller a bit more firmly and widens his stance. The teleprompter pauses at a prompt: "Play game," it tells the showmen. Lights dim, your pupils begin to dilate, and you hear one of four sounds:

3. A woman, who has lost everything, narrating softly and choking back the tears

4. A man, who has lost everything, narrating gruffly and choking back some cigarette ash he was just gargling

And then the scene begins; bright and out of focus at first, then displayed in scripted camera moves, and then the player controls kick in and a HUD pops up. He may or may not be holding a gun.

Here's where the plot starts filling in. Perhaps the studio head explains things while the game director plays, or perhaps the exposition happens on-screen. But when you've seen as many trailers I have, all the hyperbole and cliches can run together...

HELP PAUL REMEMBER WHICH GAME IS WHICH BY FILLING IN THE BLANKS!

In ____ the world is threatened by "rogue terrorists."

Someone tells _____ "if he dies this mission was for nothing," and then when _____ finds the guy, that guy says "if you've gotten to me I'm dead already" and kills himself.

An ironic twist on _____'s magic system: "this same magic may destroy us."

In _____ someone bemoans, in a hoarse whisper, "We built computers, robots, unmanned armies... but nobody asks what happens if the enemy gets the keys."

Now that your heart strings have been tied to the "story," now that you really get "what's at stake," you're ready for the real action: the player character starts killing a lot of things. These kills start out slow, calculated, and perhaps even peril-fraught. But the pace soon quickens, and now the bodies pile up. You'd think that would make you immune to the quickening gore, but in reality you're only more and more hungry for it. Every hit must be more visceral, more heartfelt, more bittersweet. You ooh, ahh, and gasp in unison with the rest of the audience, as if teleprompted yourself.

And then comes the money shot: the indelible image that will be burned into your brain for the rest of your life. It's a literal burn-in, like a too-long-displayed graphic burns into an old-school LCD, and therefore game time slows in some literal or figurative way. And here it comes, seemingly one frame at a time:

Someone. Gets. Stabbed. In. The. Neck. 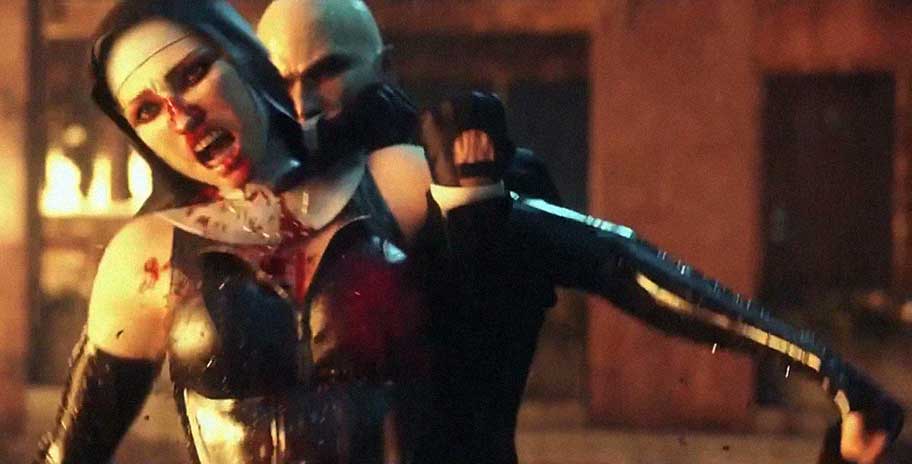 There are a lot of advantages to the neck, as opposed to, say, just ripping off someone's arms (a passé Mortal Kombat technique) or shooting someone in the head with a sniper rifle and observing the contents of their head exit through the back.

First off, the neck is a guaranteed fatality. Gamers have seen their enemies recover from innumerable forms of slaughter. Lightning, fire, blue lightning, green fire, shotgun blasts, and the occasional lower-torso removal can be shrugged off by a resilient boss or an indifferent zombie. Not so with neck stabs.

Secondly, a neck offers a large number of entry points and angles of attack. A throat can be "slit," a head can be "lopped," and a knife can be "buried" in the back of the neck. But this year's real winner, at least on the E3-abused, burnt LCD of my own mind, is an upward stab through the soft flesh under the jaw, up through the mouth roof, nasal passages, and eventually, mercifully into the brain. I call this the "shish-kabob."

Crucially, a neck stab allows you to see the flame of fear in your enemy's eyes before it's extinguished. "That was a real man I killed," the execs and the game director and the teleprompter want you to think, as you put bullets in the brains of five more meatbags. "He didn't deserve to die." Pop pop pop boom. "What a terrible cost." Slash stab stab gurgle. "What a cruel world." When the game is released this fall, or maybe next fall, there will be cutscenes to help you make sense of all these conflicting emotions. For now you can only cringe and applaud on-script with your colleagues.

When the violence finally ceases, our avatar is "extracted" by some sort of vehicle that can land and take off vertically — there's never time to get to an airport, naturally. This vehicle could be a helicopter, but if the game takes place 5+ years in the future, it's a next-gen, physics-immune fighter jet. Blue-glow jets are the preferred method of ambiguous propulsion.

Now the protagonist can observe the mangled bodies of the slain from above, briefly, before all his handiwork is consumed in an explosion, which levels the entire city block. 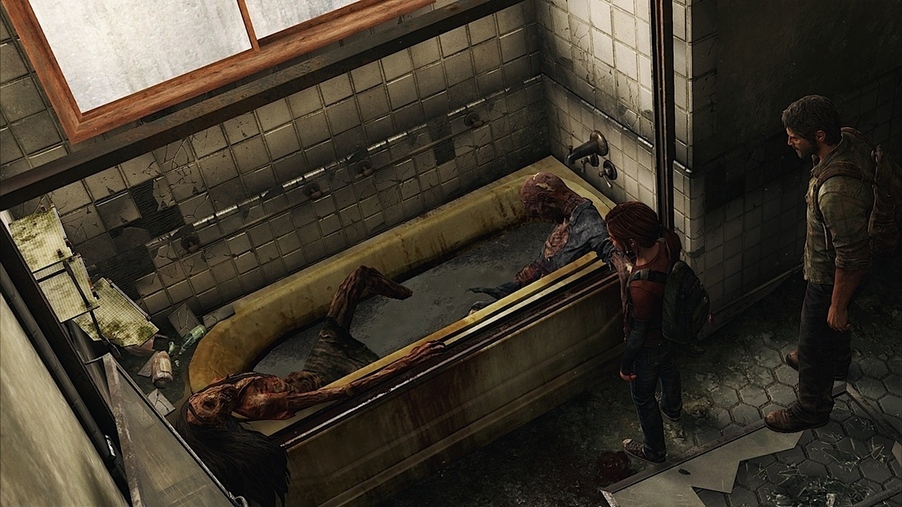 "It was them or me," he'll exposit out-loud to himself, from his just-barely-safe vantage point in a shadow-org-supplied blue-jet plane. "An ancient evil has awakened, the rogue terrorists kidnapped the president (a woman) to get it. Just my luck." He lights a cigarette and stoically mourns the fate of humanity, and humanity's fleshy necks.

The lights come up, the execs shuffle the director off stage before he can open his mouth, we're tossed up to the mega-exec, and the teleprompter declares that we shall start again. You'll never guess what: there's a new Call of Duty game in the works...

BONUS: SUGGESTED NAMES FOR NECK-STAB-REPLETE IMITATORS TO BE SHOWN IN SMALL BOOTHS AT E3 2013

Face-Kebab: Meat on a Stick