Information Architects has pitched a concept "mark as error" button for Twitter that would allow users to strikethrough errant tweets instead of deleting them.

Usually three thoughts go through your mind after you publish a tweet: you either feel satisfied over how witty and funny you are, you discover you made a typo or botched a URL, or you realize that you've made a huge mistake. Tokyo-based design firm Information Architects — known for the minimalist text editor IA Writer — is (unofficially) pitching Twitter with a new option to handle erroneous tweets other than deleting them. According to the firm's Oliver Reichenstein, the answer is a "mark as error" button that would strikethrough the bad tweet. It's a rather clever idea, as it makes it clear to all that the tweet was a mistake, and it also raises a flag to be on the lookout for a followup tweet to explain the error. Unlike the drastic action of deleting a tweet, retweets and replies would remain intact, and there wouldn't be a massive void leading to speculation — why did he delete that tweet? what is he covering up? There are concerns over adding increased complexity and advanced "pro" options to Twitter, as pointed out by the social network's designers when Reichenstein suggested the feature, but we'd be all for it if the error button ever became a reality. 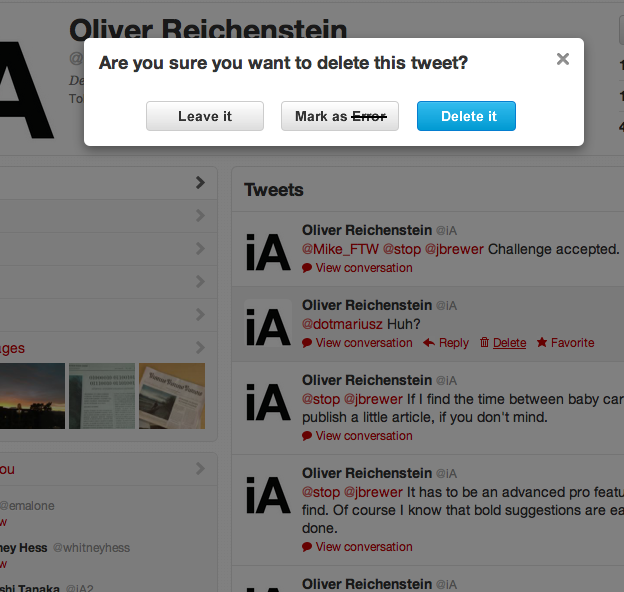