Microsoft may be preparing to launch an Xbox Surface tablet as leaked documents suggest the company is building a 7-inch tablet.

Microsoft's major announcement is scheduled for later today and despite a large amount of speculation, we're still no closer to understanding what the company is planning to reveal. An alleged Xbox Surface document has surfaced this weekend though, hinting that Microsoft may be preparing a 7-inch tablet computer to accompany a streaming base station, like Nintendo's Wii U. Specifications for the alleged tablet include an ARM-based Texas Instruments processor with 288MB of RLDRAM 2 and a resolution of 1280 x 720.

Although the document could easily be faked, it does mention Microsoft's Rick Gutierrez who works on the company's research team. Mary Jo Foley points out that Gutierrez has worked on the Kinect for Windows SDK and the Windows Embedded Compact team. With persistent rumors of a tablet unveiling, and suspicion that Microsoft may be building its own device — the Xbox Surface information comes just hours before we'll find out what Microsoft is preparing to unveil to the world. Xbox branding for a consumer tablet would make a lot of sense given the company's plans to move from Zune Music to Xbox Music, and the introduction of Xbox SmartGlass — a companion app for mobile devices that lets you control and interact with the Xbox 360.

Stay tuned to The Verge for our live blog from Microsoft's major announcement, starting at 3:30pm PT today. 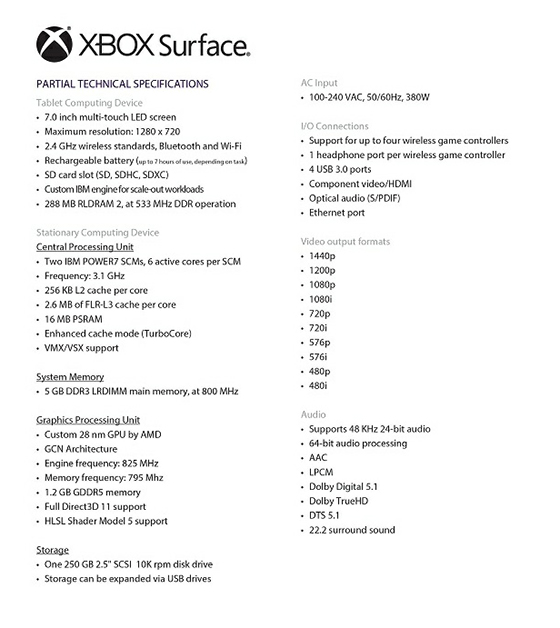