Share All sharing options for: Frog redesigns the Android user experience with Feel_UX

When we first came across Sharp's Aquos Phone Serie back at AU/KDDI's summer lineup launch event last month, we were a little taken aback by the aggressively minimal Feel_UX skin that lay on top of Android 4.0. While manufacturers customizing their devices is hardly a new thing, Sharp's effort goes further than almost any other we've seen — it's nothing less than a top-to-bottom rethink of the entire Android user experience, and it'll be found on seven smartphones from the company this summer. Feel_UX is actually the work of Frog, a design firm with over four decades of history covering creations such as the NeXT Computer and Sony Trinitron TVs. Vice President of Creative, Software Innovation Paul Pugh was in Tokyo yesterday to mark the official launch of Sharp's lineup, and we caught up with him to find out why Sharp and Frog both felt the need for a radically new Android. 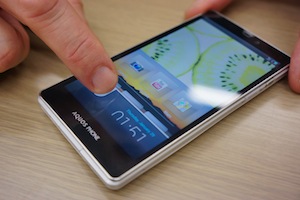 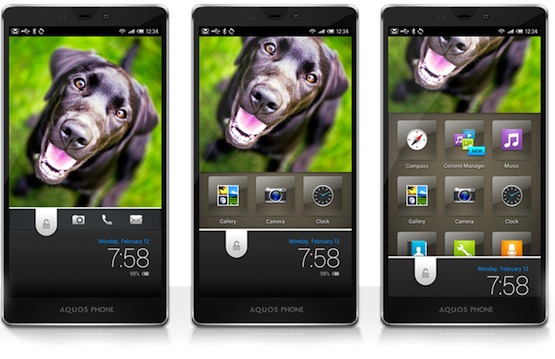 The lockscreen was a major focus for Frog and Sharp — Pugh says that it's important for users to have a positive first impression of the phone, especially in stores, and Sharp wants them to associate a "recognizable experience" with the company. It's definitely an attractive and functional design, and has some potentially unique use cases such as sharing photos without the need to unlock the phone.

Push the sleep/wake button on a Feel_UX handset and you're greeted with a new lockscreen. It's dominated by an unobscured wallpaper photo, which you're able to switch at will by swiping left or right, and the bottom of the screen is cordoned off by a small pull-down tab that unlocks the phone. Pushing the tab up reveals shortcuts for the camera, phone, and mail apps, and you can swipe to view various things in the bottom screen section — for example, a stocks widget, a clock, or a weather tool that can prompt a change in the wallpaper above to match what's going on outside. The screen also takes a welcome leaf out of iOS's book by placing notifications right on the screen for easy access. 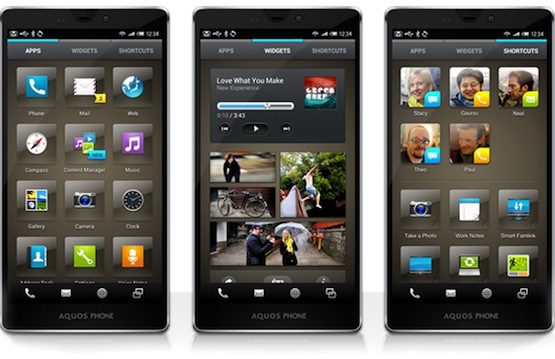 Once you're in the main UI, the first thing you'll notice is a sheet of apps that scrolls from top to bottom. Sharp is calling it the "3-Line Home," but it can be set to three or four columns wide. Although I'd personally recommend the latter, it really depends on you — Pugh told me that more compact icon grids can be difficult to navigate for people with smaller hands, especially on phones with larger screens like the 4.6-inch Aquos Phone Serie, but I'd rather have the extra information density.

The bigger problem for many, however, will be the effective loss of the homescreen as we know it. Feel_UX phones with onscreen buttons don't even display a home icon until you're inside an app, and pressing that icon will take you right back to the 3-Line Home. So, where you'd normally expect to see a "desktop"-style screen with widgets and app icons, Feel_UX will always have you one level deeper. Frog saw the need to launch a separate list of apps as an unnecessary barrier to some of the phone's most useful and frequently-accessed functionality, and Pugh explains that "the idea of hanging the launcher one level below the home space actually created more friction for users getting towards their apps."

So, what about widgets? They have their own dedicated screen, too, accessed by swiping to the right from the apps sheet. Widgets can be easily placed anywhere in this sheet, and its neverending nature means you won't ever have to rearrange your phone's homescreen just to find a place for a new app. I actually like this part of Feel_UX quite a bit — if you use it as your default page, it gives you a constantly scrolling list of information with your "app drawer" just a swipe away to the left. Swipe to the right from your widgets sheet and you're presented with a similar section devoted to shortcuts. "A lot of users just didn't really understand what widgets and shortcuts were," says Pugh, "and we thought those were some of the more unique features of Android versus competitor handsets, so we wanted to kind of celebrate them by giving them their own space. We think we've taken the best of Android and elevated it." The downside for current Android power users, however, is that you won't be able to create personalized homescreens with a mixture of app icons and widgets. 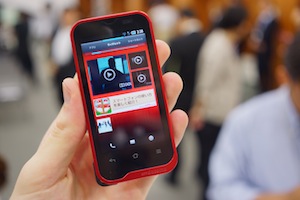 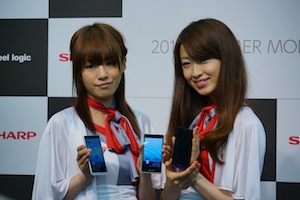 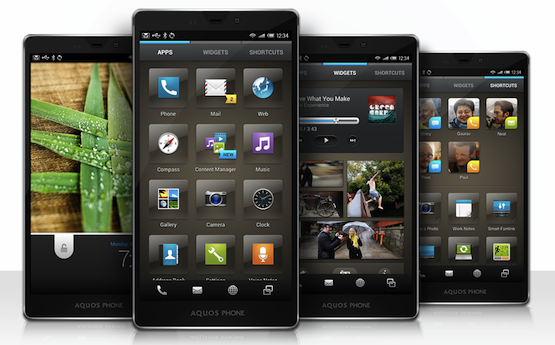 Simplicity is definitely a priority for Frog, and Feel_UX is intended to reach as wide an audience as possible, including those upgrading from feature phones for the first time. That doesn't mean it'll be limited to entry-level phones, however — Sharp is using it on a wide range of devices from the radiation-sensing Pantone 5 to premium Aquos Phones like Docomo's Zeta, AU's Serie, and SoftBank's Xx. There doesn't seem to be much of a performance overhead, with smooth scrolling on all the devices that I used, and Pugh says "it was really designed as a premium experience."

Feel_UX has a soft, subtle visual style that's designed to be gender-neutral and unintimidating. Pugh wants to avoid the path walked by what he calls "Darth Vaders" — high-end, shiny, black Android devices that often turn off casual users with their hardware and interfaces such as stock ICS. "The native skin still plays to that vein strongly. There's a beautiful simplicity to it, but my personal opinion is that it 's still kind of cold. The iconography isn't very explicit — if you're not experienced with what the conventions of Android are, it's not obvious how to use it. [Meanwhile] you hand an iOS device to a child and they seem to be able to navigate it very well. The colors that we chose, the way that we rendered the icons was much less saturated and high-tech looking."

That's not likely to make Feel_UX appeal much more to those already comfortable with Android, of course, and I'm sure many reading this will bristle at the very concept that Frog has put forward. I myself use a Sharp Aquos Phone as my daily driver mainly because I was impressed with the company's previous thoughtful approach to skinning Android 4.0, so the radical new strategy was somewhat of a surprise. Then again, I've been using smartphones for several years. I might not use Feel_UX myself, but it looks like a good bet for Sharp. It's unique and recognizable, and may well open up high-end handsets to a larger consumer base. This could happen beyond the borders of Japan, too — while Sharp doesn't yet sell its premium Android devices abroad, the company said that it sees Feel_UX as a possible way to break through into the global market.

"When Sharp approached us," says Pugh, "they really wanted to do something different. They surveyed the Android landscape and realised that, as a manufacturer, creating a great software experience was still really important even though there's a significant leaning towards hardware innovation." Frog has adopted a mission statement of "don't worry about the competitors, just do what you believe is right for the user," and while that user may or may not turn out to be you, Feel_UX is a radical example of the potential in Android.