Spotify today announced that Spotify Radio, a Pandora-esque recommendations service available in its desktop app, is now available on iOS devices. This marks the first time Spotify has ventured into music discovery on mobile devices, as well as the first time Spotify has let mobile users stream music for free. Until now, only Spotify Premium subscribers ($9.99/month) had the ability to access the company's mobile app.

Spotify today announced that Spotify Radio, a Pandora-esque recommendations service available in its desktop app, will be available later today through an app update on iOS devices. This marks the first time Spotify has ventured into music discovery on mobile devices, as well as the first time Spotify has let mobile users stream music for free. Until now, only Spotify Premium subscribers ($9.99/month) have had the ability to access the company's mobile app.

Just like in Spotify's desktop app, you can now pick a song, album, artist, or playlist, and build a radio station using it. Spotify makes recommendations based on millions of hours of user data combined with data based on playlists users create — since playlists are already places where users organize similar content. The unlimited free radio feature only applies to users in the US, and abides by the same DMCA copyright ground rules competitors abide by — which means that if you are using Spotify for free, you can only skip a handful of songs in a row. 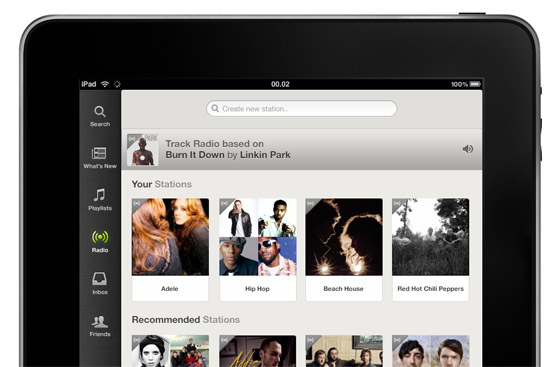 Front and center in the updated iPhone app's navigation bar is a Radio button that pulls up stations you've recently created, as well as recommended stations and genre stations. Unfortunately, you can't yet save stations you've created anywhere besides a recent "Your Stations" area. Thumbs up and thumbs down ratings (an oft-requested feature) only apply within the playlist you're listening to, unlike other services that build a persistent database of what you like and don't like. Spotify could've taken this route, but decided that since people often create playlists for specific moods, creating an overall profile for each user's taste at this point would be redundant. "Sometimes you want to listen to the Jackson 5," Spotify communications head Graham James said, "but sometimes you want to listen to the Thriller period." Each station you create stays separate and becomes more specific as you thumb up and thumb down music while you listen.

"We expect people to invest a lot of time into these stations."

Spotify Radio, which launched on desktops back in December, challenges industry leaders iHeartRadio and Pandora, which both offer customizable streaming radio stations. These competitors, however, do not offer a bundled unlimited plan that lets you play whatever song you'd like. They do offer some perks Spotify can't match like real radio stations from around the country (iHeartRadio) and a unique algorithmic recommendations engine nobody seems able to match (Pandora).

Spotify's free users will hear ads from companies like Chevrolet and Heineken, much like they would while using Spotify's desktop app (or Pandora), and can only skip a handful of songs at a time. The only difference is that on mobile, Spotify still doesn't let free users pick exactly what they want to listen to. "We expect people to invest a lot of time into these stations," Product Manager Donovan Sung said. The hope is that mobile users will get a taste of Spotify and upgrade to the company's $9.99 Premium service.

Spotify Radio is the biggest new feature in today's app release, but there are also various speed improvements and upgrades like a new menu that pops up when you long-press a track inside Spotify for iPad. While Spotify wouldn't comment on when Radio is coming to Android and other countries, it did reiterate that the company's goal is to become "ubiquitous" on all platforms — so it should only be a matter of time. As evidenced by the recent launches of brand new iPad and Android apps, Spotify appears to be moving quicker and quicker to shift its priorities towards mobile.