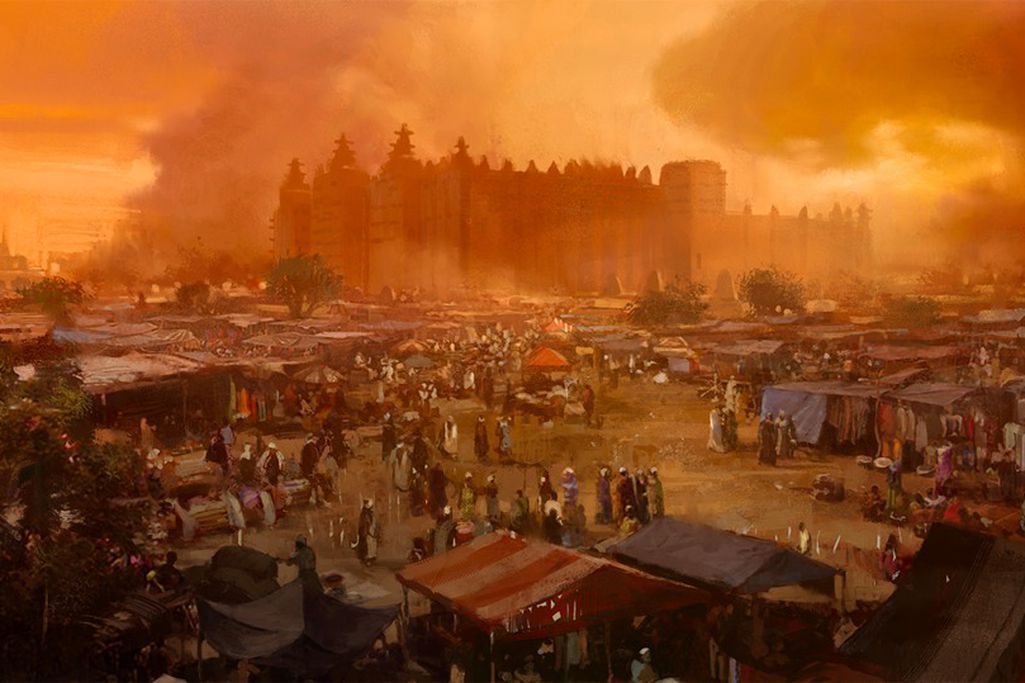 A new, major expansion pack for Sid Meier’s Civilization V, a 2010 turn-based strategy game, has just launched. Called Gods and Kings, it adds some new facets to the game which have been seen in previous versions, including robust religions and espionage features. It also adds nine new playable civilizations, a bunch of luxury and strategic resources, and almost 30 new units. Is it good? Yes, it’s awesome. But that’s beside the point, at least for me.

First off, it’s important to know that I can’t in good conscience call myself a gamer. The list of games which have piqued my interest is incredibly, sadly limited. I have dabbled in the Mario Brothers games since childhood, and had a brief but intense love affair with Animal Crossing, but really, only three franchises have enthralled me to obsession: The Sims, Fable, and of course, Civilization. Also, I’m really pretty bad at video games, even the ones I love and play for hours on end.

I started playing Civilization at number II, sometime in the year 2000, so I was literally “late to the game” — it was about six years old by the time I picked up on it through a friend. Like I said, I’m not a huge gamer, and the last time I’d done any PC gaming it had involved multiple bouts of dysentery and the loss of several wagon wheels, so Civ II didn’t come easily to me. The game seemed overly complex and involved, its barrier to entry higher than I was prepared to climb, but early on, one thing snagged at my attention: the fact that it was a turn-based game. This fascinated me, and I remember that after my first near all-nighter with the game, I lay in bed falling asleep, plotting out turns for the morning.

But my time with Civ II was short-lived, because in October of 2001, Civilization III was launched, starting my obsession in earnest. A lot of people I've talked to favor Civ II, but Civilization III, in all its many incarnations, will always have my heart. This was the game in which I developed my strategy — if it can be called that — which I have stuck with to this day, pretty much consistently unsuccessfully. You see, I don't really like "doing" wars: I like building things. I like flourishing culture and lots of money. So, I developed a mode of gameplay which I cannot recommend, but which I find to be riveting and endlessly fascinating. I usually start on one of the easier game play difficulties until I've familiarized myself with the idiosyncrasies of the particular version, and I like to play through each civilization systematically. With Civilization III it took years. My maps are always "huge," my game length always "epic," and often (though not always), I limit the number of civilizations severely. On harder difficulties, I often disable the barbarians. There are definitely downsides to this, but it ensures that the civilizations will not have to immediately build up their militaries — most of the time they do anyway, but at least I'm left in peace, and that's what I want: peace. 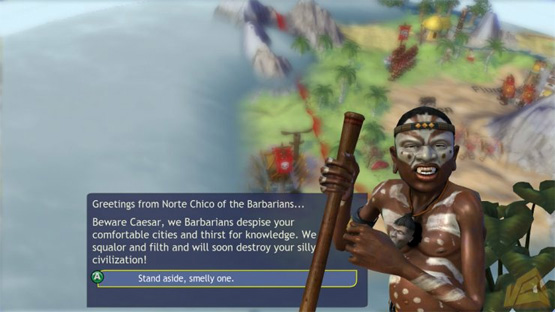 I don't explore. Like many Civ players, I usually found my first city wherever the game plucks me down, and sometimes I'll send my first warrior to check out a few squares beyond my city's boundaries, scoping out territory for my next one. Beyond that, however, I'm not interested: I focus my energies on building, working the land, and discovering new technologies. Nothing irks me more than to have another civilization beat me to a Wonder or a new Era. That's probably true of most players, but for me, it is devastating. I'm not a hardliner with myself; if I'm annoyed at my progress (or lack of), I simply start over. 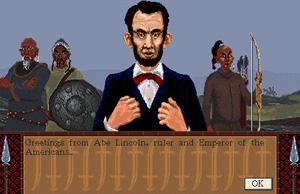 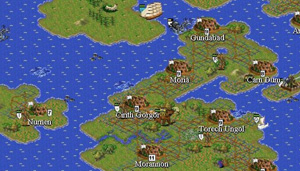 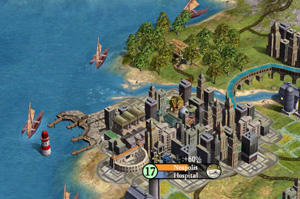 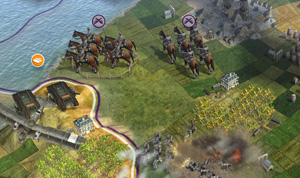 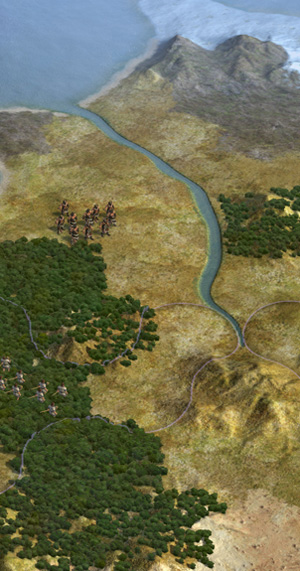 I also despise meeting another civilization too early in the game, because then I have to deal with them moving forward — and I’d much rather be left to my own devices for as long as possible. This feeling — the need to endlessly modify, coddle, and build my civilization is probably related to my love of The Sims, too, where the point isn’t to win, but to play. Of course, I do love to win, too, but most of the time, it’s not my main goal.

My main goal is always to make peace and avoid war. It’s not so much that I’m a plant-eating pacifist (though I am), but that I’m lazy, and war is hard. It requires a lot of money, it requires resources normally dedicated to beautiful Wonders and buildings to be allocated to constructing dumb warriors who always need to be upgraded in order to remain effective. Avoiding war, especially on the more difficult game settings, is sometimes nearly impossible. So, how do I do it? Well, let me say that probably more than half the time, I'm unsuccessful. But generally, I build up my defenses: walls armories, and barracks, as early as the game will allow. I station two military units in each city, and am agreeable to other world leaders whenever possible. I usually have plenty of money to give them, and I don't mind sharing resources. I balk at open borders almost all of the time, and I do not like sharing technologies. When war does inevitably come, I defend, and almost never go on the offensive. Sometimes I lose a city, but most of the time, I'm able to fend them off by building the additional units I need to keep the infiltrators out of my way. I placate where necessary, and make peace as soon as possible.

Because my civ is often more technologically advanced than the other civilizations, the units I do have are also more advanced, and building those defensive structures always pays off. It also means I often get the devastating nuclear weapons faster than other civilizations. I never used one in Civilization III or Civilization IV, if I recall correctly. Civilization III is the game that I probably spent the most time with, but when Civ IV came out I dutifully bought it, leaving Civ III in a dusty corner. This game introduced organized religions, but did so in a way I wasn’t completely pleased with, if only because not founding a religion led to slower advancement than for civilizations that did. Still, I enjoyed the addition, and played on, trying not to wage war. But Civ V renewed my obsession with the franchise, and while I missed the religions (I miss anything that further complicates the game), I loved the fact that the designers had rolled back some of the more cartoonish aspects of Civ IV in favor of a more sophisticated veneer.

Speaking of cartoons, I can express the depth of my love for the Civilization franchise with one admission: I played, and enjoyed, Civilization Revolution, the 2008 console port on Xbox. Oh I’m sure that plenty of people love the game, but for any "serious" Civ player I imagine that like me, loving this pale, shortened, and cartoonish version carried with it a degree of embarrassment felt every time Ghandi or one of your advisors appeared on the screen, looking at you childishly. But I played it. A lot. And that's really my point: the new Civ expansion, which adds back religion and spies, further complicating the game and making it possible to play even longer, is amazing and wonderful. Each version has been an iteration on near perfection so while I'm hesitant to say it, I'm not sure what 2K could do at this point, 12 years deep, to ruin the franchise for me. I'll dutifully and joyfully play whatever the next version is, and the next after that, into my old age. Like I said, for me, the point isn't really winning, but playing for as long as possible, often far, far past having won the game, into infinity, and the glorious advancement that is "future tech."

A few weeks ago, tired from too much unavoidable war, I dropped a nuclear bomb — I believe my first — on the city of Bristol, England. I won the war, and the game, but I also lost the desire to continue the game after the win. Just looking at that glowing yellow, decimated city made me ashamed, and I knew: it was time to retire.