Researchers have developed BioTac, an artificial finger which can detect the texture, temperature, and hardness of different surfaces.

Via Gizmag | Source Frontiers and University of Southern California

Researchers at the University of Southern California's Viterbi School of Engineering have developed an artificial finger which can detect texture. Dubbed BioTac, the sensor was co-funded by the Keck Futures Initiative of the National Academy of Sciences, the US Defense Advanced Research Projects Agency (DARPA), and the National Science Foundation. It has a soft exterior skin that surrounds a liquid filling and a bone-like core. Inside the core, the BioTac has a hydrophone — an underwater microphone — which detects vibrations as the sensor moves to determine texture. The team says the BioTac, just like its biological inspiration, can also detect directional force and temperature. 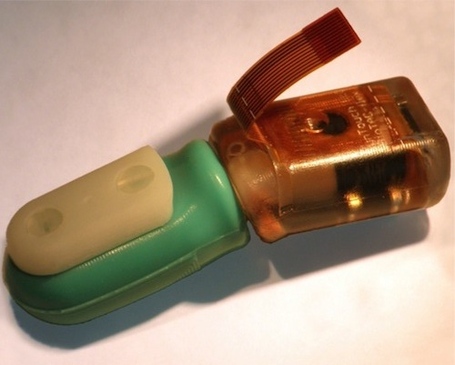 The BioTac was incorporated into a specialized robot that was trained to detect 117 materials. It managed to correctly identify which material it was touching 95 percent of the time, which according to the team's results was more accurate than a human finger. The collaboration with DARPA focused on using the sensor to identify the hardness of materials like rubber. The researchers are partners in SynTouch, a tech startup, and are looking to sell the sensor for use in prosthetics hands and industrial robots.