MIT scientists create a pinhole camera out of any windowed room

MIT scientists have created a forensics tool that uses light-filtering software to find the location of a windowed room by analyzing still images.

Share All sharing options for: MIT scientists create a pinhole camera out of any windowed room

MIT computer scientists Antonio Torralba and William Freeman have created a new forensics tool that can be used to help identify the location of any windowed room by using just a few still images. Not unlike a pinhole camera or camera obscura, the new technique takes advantage of light shining through a hole that creates an inverted image on the opposite surface. Typically, the amount of light coming in through a hole as big as a window results in a blurry and unrecognizable image but, by using software that can manipulate light intensity, the projection can be cleared up to properly respresent what's outside. As demonstrated by New Scientist, the software works by comparing the light intensity of two photos of the room — one of which must have an object blocking some of the light hitting the wall opposite the window — then makes adjustments to create a single, focused image. The new technique will be presented at the Computer Vision and Pattern Recognition conference later this month. 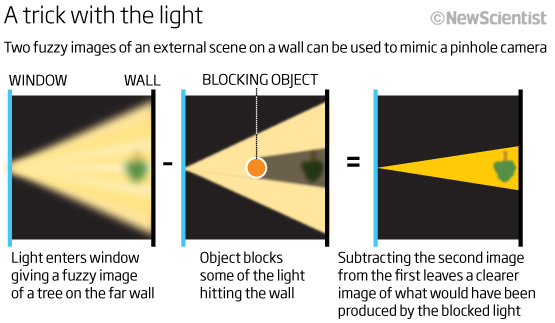