Not many people remember this, but the original Xbox got its name from Microsoft's plans to deliver a "DirectX Box" to the home console market.

Not many people remember this, but the original Xbox got its name from Microsoft's plans to deliver a "DirectX Box" to the home console market. Feeling the need to counteract the growing influence of consoles at the turn of the century, Microsoft sought to bring DirectX — its proprietary collection of programming interfaces (APIs) used to build games for Windows — to the living room. While its first attempt was rightly derided as a chopped-down desktop PC dressed up in home entertainment garb, the consequent Xbox 360 has been a runaway success with users, and its slim second iteration has also been a fantastic feat of hardware engineering to boot. And it all started with that seemingly innocuous group of APIs. Now, DirectX is coming to Windows Phone.

Before we all get too far ahead of ourselves, let's recall just how many years it took Microsoft to perfect its home console recipe with the Xbox. Wading into a new market is always difficult, mistakes will inevitably be made along the way, and progress will be slower than interested observers will want it to be. So no, you won't soon be taking your Crysis 2 gaming session on the road with just the Windows Phone handset in your pocket. But the potential is most certainly there.

Whereas the commonalities between the original Xbox and the desktop PC were initially scorned, with Windows Phone 8, being similar to Windows is the point. Obviously not in hardware terms, but Microsoft's message from the Windows Phone Summit is crystal clear: the software underpinnings of Windows 8 and Windows Phone 8 have a "shared core," which is composed of the same kernel and multiple other coding interfaces that make it easy for developers to port apps between the two. The reason I consider DirectX the most critical one among them should by now be self-evident, but it's easy enough to illustrate by pointing out that DX incompatibility is the main reason why the Mac has long trailed far behind Windows in terms of desktop and laptop gaming.

With Windows Phone 8, being similar to Windows is a good thing

Microsoft has already signed up third-party middleware providers like Havok and Autodesk to support WP8, with yesterday's Summit including multiple demos showing off the Havok Physics engine. The most encouraging aspect came at the end, when Head of Product Management Andrew Bowell noted that it took Havok "under three weeks" to port its rather gruesome "full fat" body simulation asset. 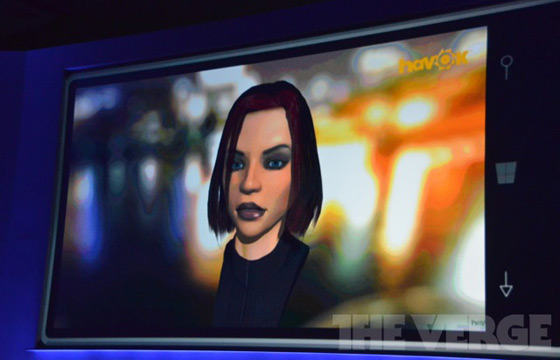 Yes, Havok already supports Android, iOS, and plenty of other platforms, but it's just another solid piece in the mobile gaming puzzle that Microsoft is putting together. Adding native development support, giving game makers access to the low-level APIs that they've wanted and been denied on Windows Phone until this new version, is going to drive a lot of interest. Microsoft is still going to face challenges in increasing its smartphone market share, but at least now games like Shadowgun won't be prevented by technical barriers from appearing on its platform.

Beyond giving devs access to mature and familiar tools in DirectX, Microsoft offers another big advantage over Android: a consistent hardware platform. Calling Android fragmented may sound like a tired and ancient complaint, but it remains sadly valid. If Android devices could offer consistent baseline specs to game developers, we wouldn't need things like the Tegra Zone or PlayStation Mobile to tell us where to find games with higher-quality graphics. Microsoft may be in the midst of performing another hardware reset with Windows Phone 8 — the lack of backwards compatibility to Windows Phone 7 devices is a bitter pill to swallow — but its continued focus on standardized specs gives game makers a set of goalposts that isn't shifting as rapidly as on Google's platform.

There's a lot of work still to do, but Windows Phone's gaming potential no longer has a ceiling

In choosing the Snapdragon S4 Plus as the processor and a high-res 1280 x 768 as the max resolution, Microsoft is going for the best currently available technology with its new platform. That's a lesson learned from its initial launch of Windows Phone 7, which ran very smoothly in itself, but was released on a Snapdragon core that was immediately superseded by faster and more efficient parts.

None of the foregoing factors are guarantees for success, as Microsoft's timing and execution with Windows Phone 8's release will still be decisive, but there's great reason to feel encouraged about the future of mobile gaming on Windows Phone 8. Whereas Android has a massive and hungry audience and seemingly no consistent way to sate it, Microsoft looks to have all the pieces in place to deliver compelling new gaming experiences. The former is the opportunity, the latter is the tool with which to exploit it.

Now it's just a matter of convincing game makers to make games — shouldn't be too hard, right?