Can Alienware’s gaming goliath best its own price tag?

Alienware is all but synonymous with aggressive styling, audacious lighting, and burly machines belching out heat and frame rates. The latest update to the M17x line is no exception; packed into the familiar chassis are a quad-core Intel Ivy Bridge processor, 8GB of RAM, and a GeForce GTX 680M GPU, the fastest mobile GPU Nvidia currently has to offer.

In typical Alienware fashion, high-end wares will cost you a pretty penny — $2,599, as configured. Does its performance match the price tag? And more importantly, does anyone need to spend this much on a gaming rig? Read on to find out.

The 17.3-inch Alienware M17x hasn't changed all that much over the last few years. It's large: the model I reviewed is 1.75 inches thick, and weighs 10.6 pounds. One could also accuse the machine of being unsightly, but I actually find it rather attractive: there are lights (and I love lights) but the effects are as tasteful or gaudy as you want them to be. The lid and palmrest are encased in a soft-touch rubber material, making them both comfortable and easy to hold. The lid's hinges are a bit stiff, but it opens to reveal that large, attractive display. The edge-to-edge glass is interrupted by rubber bumpers sitting on the edge of the display, which lend the screen a bit of cushioning when you're shutting the lid.

The port selection hasn't changed since last year's model. On the left, you'll find the Gigabit ethernet port, a VGA port, Mini DisplayPort and HDMI-out slots, a pair of USB 3.0 ports, jacks for headphones, headsets, and microphones, and a S/PDIF jack. The right side hosts the slot-loading Blu-ray player, a multi-format card reader, another pair of USB 3.0 ports, an eSATA / USB combo port, and HDMI input. The power adapter connects through the rear, keeping it out of the way. Most of the changes are internal: the M17x R4 now sports a 2.6GHz Core i7-3720QM processor, couples its meager 500GB hard drive with a 32GB mSATA solid state cache, and adds the 28nm Nvidia GeForce GTX 680M GPU. Connectivity options include 802.11n Wi-Fi and Bluetooth 4.0. For just shy of three grand I would've liked to see at least a terabyte of storage, but there are plenty of upgrade options (including a Killer Wireless-N networking card and 512GB SSDs in RAID 0) for those with deep pockets. 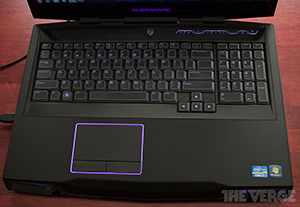 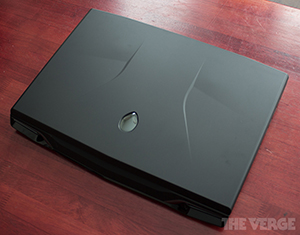 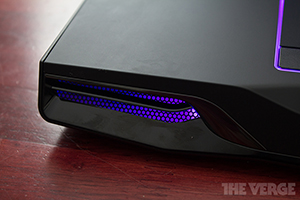 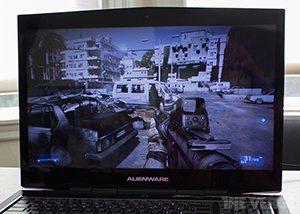 I live in what could affectionately be called a dimly lit cave, and the reflections on the 17.3-inch, 1920 x 1080 display were still something of a nuisance. Sunlight will not be kind to you should you decide to lug this beast outside (or near any windows), so you'll want to find a nice shady spot for extended gaming sessions. The screen is rather pretty though, serving up vibrant colors coupled with deep, distinct blacks (when you aren't staring at your own reflection), and generously wide viewing angles.

A pair of Klipsch speakers are parked on opposite ends of the front lip, but the audio seems to reverberate from some cavern nestled inside the M17x chassis. It gets rather loud, easily filling a room without distorting the audio. The audio is a little light on bass but sound remains crisp and clear. I'm sure a subwoofer could've fit somewhere inside this 11-pound behemoth, as both the M14x and M18x include one, but laptop subwoofers generally don't make for significant improvements. A Creative Sound Blaster Recon 3Di chip drives the audio experience, and you can tweak the sound by way of the THX TruStudio Pro software. You'll still want to keep a headset nearby for things like voice chat and surround sound (and drowning out the din of the fans), but the speakers won't disappoint. 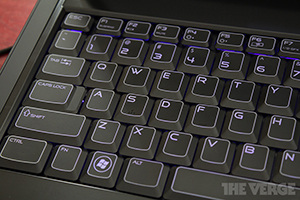 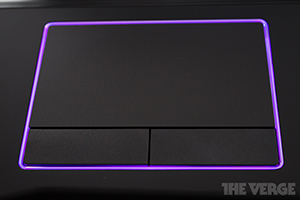 In a world dominated by chiclet keys, the M17x sticks to the traditional scissor-switch keys we've known for time immemorial. The keys are large, spacious, and responsive; there isn't too much travel to every press and actuation is near instant. That's great if you're just hammering out prose, but gamers wary of accidentally mashing the wrong key will want to be a little careful. There's quite a bit of room for the palm rest; my oversized mitts appreciate the space, but it does feel like an awful lot of extra real estate that could've been invested into making the keyboard a touch larger. Few games actually use the Function row, but its miniscule keys could stand to be a bit taller. Media shortcut keys inhabit a bar on the top right corner of the laptop's base. All of the standard playback controls make an appearance alongside a Wi-Fi toggle switch and a dedicated shortcut key for the Alienware Command Center app.

Let's talk about the lighting. For many users, Alienware's options are going to be a bit superfluous — and there's no reason to dedicate a shortcut key to the Command Center, though it admittedly gives you power options and touchpad settings, too. Alienware's FX isn't exactly a game-changer, but when you're playing a game that supports the backlighting, it's a rather novel experience. Consider Battlefield 3: start taking damage and the keyboard, Alienware skull badge and Alienware logo will fade to blood-red. As the damage piles on, the laptop's various lighting zones start to flash, and eventually fade to white once you've bitten the proverbial bullet. Outside of games, the lighting options are broad, though not too granular. The laptop's base is divided into 9 different lighting zones: four for the keyboard, and zones for the touchpad, the speakers, media shortcut keys, Alienware logo, and the Alien skull that sits above the function row. You can choose from a ring of color options, configure particular lighting conditions (having the skull pulse whenever you receive a new email, for example) or simply set everything to a close approximation of your favorite color (the palette isn't too wide). You can also opt to ignore the lighting altogether, and disable third-party support to keep games from fussing with it.

If you're buying a $2,600 gaming laptop there's a good chance you're going to be plugging a proper mouse in. That said, while the touchpad is a bit traditional (read: boring), it gets the job done. It's a simple matte surface surrounded by a colored ring, with a pair of buttons beneath it. Windows 7 doesn't offer much in the way of gesture support, but scrolling and pinching and panning is smooth and responsive — I didn't ever find myself reaching immediately for my mouse, which is the least you could ask from a gaming machine. 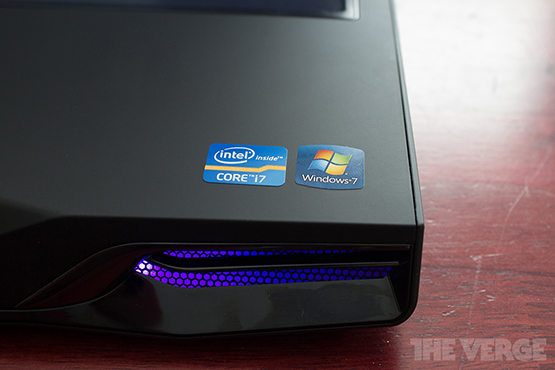 Now for the important bit: gaming. Unsurprisingly enough, $2,600 buys you a lot of frames per second. The machine scoffed at Just Cause 2, earning 79 frames per second at the display's native 1920 x 1080 resolution. Battlefield 3 ran at a brisk 44 frames per second on the Ultra setting, eclipsing every gaming laptop we've tested to date. I'd assumed the machine would be laid low by The Witcher 2, but that proved false: 45 frames per second on Ultra quality, though there was a bit of stuttering during a few sections of the opening sequence — the scene requires quite a bit of heavy lifting, graphically-speaking, but simple tweaks to a few of the settings (or dialing down to High quality) would get things running like a charm. All of these tests were performed while tethered to the power adapter, as the GeForce GTX 680M always throttles down when running on battery power and Intel's integrated graphics simply can't keep up.

The M17x is pretty fast out the gate: it boots from sleep in roughly 1.8 seconds, and is ready for action an average of 26 seconds after hitting the power button. It's also light on bloatware — the desktop is bare save for a shortcut to the Alienware Command Center app (should the keyboard shortcut not prove direct enough for you). Cyberlink's PowerDVD software supports the Blu-ray player, and the charmingly named AlienAutopsy and AlienRespawn apps provide system diagnostic and recovery tools, respectively. You're otherwise left to your own devices, and I wouldn't have it any other way. 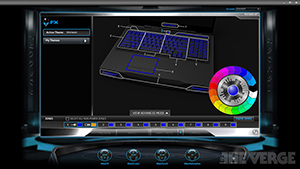 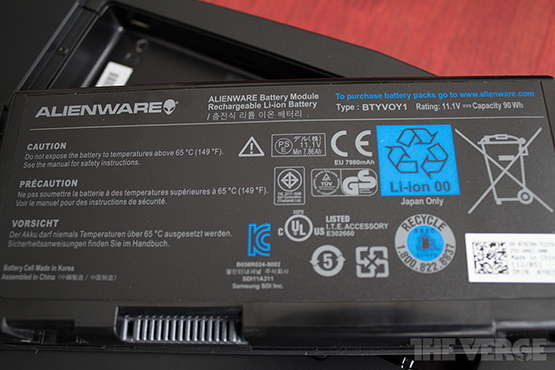 The M17x lasted for a total of four hours and twelve minutes on The Verge Battery Test — right on track with the similarly equipped MSI GT70 we reviewed recently. The test consists of downloading images and cycling through websites until the laptop's battery dies. My own use involves near continuous music streaming, the occasional video, and plenty of writing; the machine lasted for three hours and thirty-six minutes before I had to track down an outlet. That isn't much in the grand scheme of things, but this sort of longevity used to be rare in gaming machines.

Here's something a little less rare: the fans roaring to life whenever you try to get some gaming done. The fan noise didn't quite drown out the machine's illustrious speakers, but it certainly turned a few heads. I'd also caution against putting this laptop anywhere near your lap. The fans on the left and right sides of the machine attempt to keep the heat in check, but the metal vanity plate centered on the underside of the machine remained uncomfortably warm. 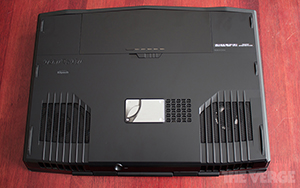 Daddy Warbucks would be proud

Everything ultimately comes back to that price tag. My inner miser shudders at the thought of spending $2,600 on a laptop. “Think of all the money you could save,” it says, sending images of desktops with dual-displays, capable mid-range GPUs, and a pantry stocked with vittles that aren’t instant noodles. But I’ll always be something of a curmudgeon. I won’t say the M17x-R4 is worth every penny, but I will say that it’s a powerful desktop replacement — the fastest notebook we’ve reviewed to date — that will likely be sailing through hardware-intensive games long after you’ve finally paid it off. It might not be the wisest use of funds, but if your primary concerns involve finding something powerful to tote to a LAN party, it’s not a purchase you’re likely to regret.