TextExpander 4 makes longer document creation easier, but only if you have OS X 10.7

TextExpander 4 makes longer document creation easier, but only if you have OS X 10.7

Smile Software’s TextExpander, one of the most popular productivity apps on OS X, is getting a major version upgrade that makes it easier to generate long documents like form letters, among other enhancements. TextExpander 4 adds pop-up menus, optional blocks of text, and multi-line fields (b, c, and d below), letting you create more flexible document templates. The update also adds a pop-up interface that makes it easier to add fill-ins to your snippets. 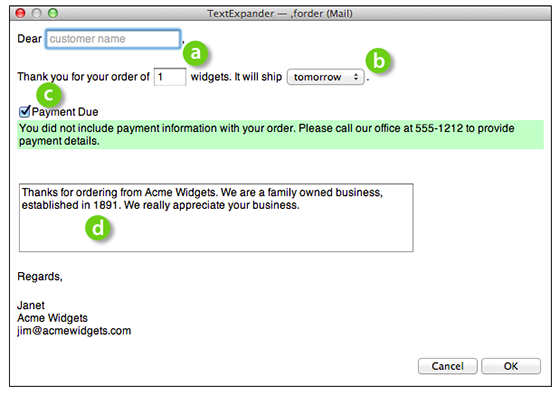 The basic idea behind apps like TextExpander is that you can use a few keystrokes as a shortcut to type something longer, making it easier every time you have to enter a common phrase, URL, or block of text or code. TextExpander 4 is available now from Smile's site for $34.95. The upgrade is free if you bought the app after January, or $15.00 for those with older licenses. Another sour note for users of older software is that you'll only be able to upgrade if you're on Apple's OS X 10.7 Lion or later — Snow Leopard users are sadly out of luck.