IT WAS AN ORDINARY DAY.

So I'm back home in Lagos, Nigeria for the summer. Its a Saturday, I'm bored and I decided to head to the mall. I wasn't expecting anything to fancy technology wise, I expected to see a couple of Sony TVs and such but my mind wasn't prepared for what I saw.

It was the first store I saw when I walked in. A Samsung experience store. They had everything: fridges, home theater systems, TVs and all their new Android gear. I do mean all of it, all their tablets and also the Galaxy S III. On display was a full array of said Android devices sharing media to TVs via DLNA, and the TVs in turn were hooked up to speakers wirelessly. Seamless, beautiful.

I left the states in the last week of May, so I never had seen it in person. At the unveiling I was disgusted, so much so that I had a forum post on the matter. I take back every single word I said.

I'm a person that swears by my Nexus S. I've adamantly said 4 inches is perfect, anything bigger is stupid. I am wrong. Dead wrong. Vlad was spot on in his review when he wrote about the Ergonomics of the handset. Having previously held the One X in the States, I was underwhelmed. I found it too wide, tall and unwieldy. It was however a fantastic looking device. The G S III however is beautiful in its own right. The first one I saw was the white and it feels oh so wonderful in the hand. It looks big in your hand, but feels arguably better than my Nexus S (TWSS). It however was not the one to make me dizzy. I found the pebble blue variant to be modestly understated. It wasn't loud, it didn't scream for attention. It was mute and as eyecatching as the cute girl at a party without make up. As alluring as turkey club sandwich with just lettuce. Beautiful. If I hadn't mad a pact to stick to Nexii, it would've been an instant buy.

Now while the phone is on display and you can theoretically walk out of the store with it, its not going to happen for a vast majority of Nigerians. Price tag? A cool 100,000 Naira ($615). That's a crap ton of zeros, and considering the flamboyant lifestyles Nigerians love to lead, Its going to be a hot seller amongst the Lagos elite. Heck, I'm tempted to pull the trigger.

Luckily, I'm a man who can control his impulses, so I still cling steadfastly to my Nexus. Regardless, Samsung is doing it right. They've shown that while they may not have the strongest software ecosystem, hardware wise, they are second to none. If Google can break it in the living room, Microsoft will have decent competition. While Apple is also a player, I think their reluctance to license things to hungry OEMs is going to come back to bite them in the arse.

The same phone, worldwide, no dilutions, from a huge entity with amazing presence physically worldwide. They aren't going anywhere any time soon.

Do pardon my horrible photography and my aging Nexus S. Its the best we could both do. Also, security started looking at me funny. It is way more impressive than these pictures suggest.

Did I mention they entered me into a raffle draw to win the S III just because I use the Nexus S? 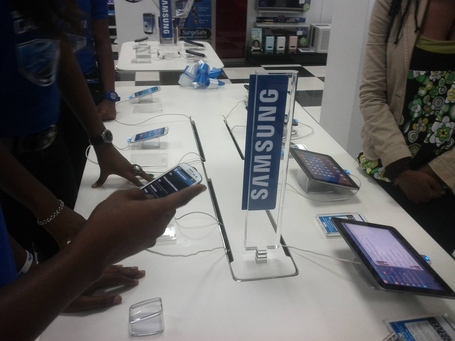 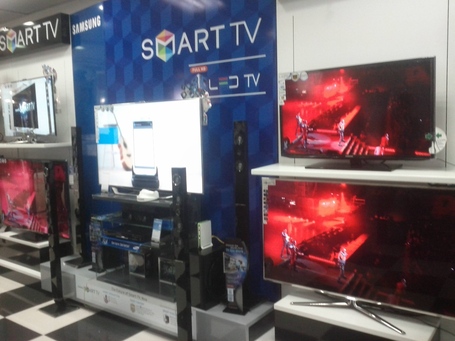