We take a look at Canon's new Mixed Reality headset. Canon sees companies using the system for everything from rapid prototyping to technical training.

Deliveries of Canon’s Mixed Reality headset aren’t starting until next month, but that didn’t stop half a dozen companies (including Canon) from showing off how they plan to use the new kit at Tokyo’s 3D and Virtual Reality Expo. We stopped by one booth to look at how companies might use the system to train engineers, taking the opportunity to disassemble and reassemble a virtual airplane engine. While the model we tried was simple, we could easily see the idea being expanded to highly complex virtual machines composed of hundreds of parts. 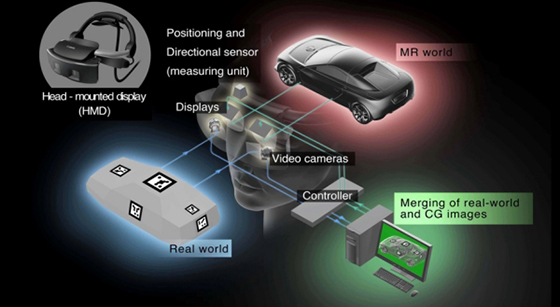 In order to make it look like you’re working on a real engine, the headset captures base images from cameras in the right and left eyes. Next, a computer rolls these together with data about your location and a 3D model, displaying the finished "mixed" images on the headset’s left and right eye monitors (diagram above). While potential applications include things like design and rapid prototyping, the company whose booth we visited, Kyokuto Boeki, said that it planned to use the headset to provide training for people in dangerous working conditions like inside nuclear power stations. We’ve never actually trained inside a nuclear power station to be able to compare, but to us, the idea of practicing on what’s essentially a life-sized 3D video game definitely sounds like the way to go.