Fujifilm has just unveiled its X-Pro1 XF lens roadmap for the next couple of years, including three zooms and five new

Fujifilm's X-Pro1 is a great camera, but with only three lenses currently available (and none of them zooms) some might find it a tough sell next to competing mirrorless systems such as Micro Four Thirds. That's set to change soon enough, though, as the company has just unveiled its XF lens roadmap for the next couple of years. First, 2012 will see the release of a 18-55mm f/2.8-4 standard zoom along with a 14mm f/2.8 wide-angle prime. The former will likely be a useful choice for many, coming in at the same focal length as most standard kit lenses but offering a wider aperture. 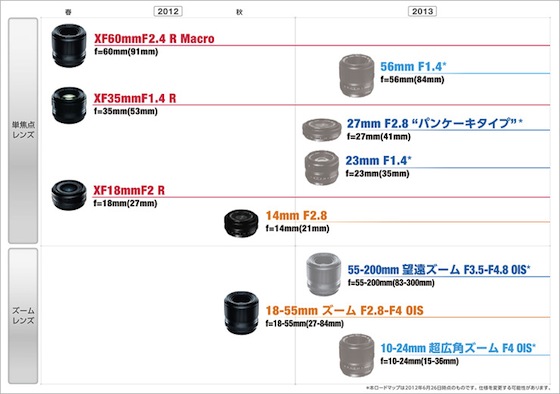 Next year will see five more lenses released, bringing the system up to ten in all. There'll be three new primes: a 23mm f/1.4, a 56mm f/1.4, and a 27mm f/2.8 pancake for those wanting to bring down the X-Pro1's not inconsiderable size a bit. Finally, Fujifilm will release two more zooms in 2013 in the shape of the 55-200mm f/3.5-4.8 and the 10-24mm f/4, both with image stabilization. It looks like X-Pro1 shooters will have a lot more options soon enough — our only concern is the as-yet unannounced but almost inevitably high pricing.

More from this stream Fujifilm X-Pro1: The story so far