A Jelly Bean statue has appeared at Google's campus in Mountain View.

One of Google's more unusual traditions is the customary installation of a monument at its Mountain View campus — outside Building 44, to be exact — commemorating each new release of Android, dating all the way back to Cupcake (version 1.5). The trend continues this week with the appearance of a bowl of spilled jelly beans, a nod to Android 4.1 which is expected to be unveiled tomorrow with the opening keynote of Google I/O in San Francisco. Why are they spilled? We wouldn't dare read into it, but the neat freaks among us may be resisting the temptation to drive over to the Googleplex and clean up.

Update: Looks like the tipped-over jelly bean canister meant nothing, aside from the fact that the latest monument hadn't quite been finished yet. According to Google employee Louis Gray's Google+ post, the earlier photo was just a work-in-progress shot — everything is now in place, and all the beans are safely contained in the giant Android / jar. Rest easy, fans. 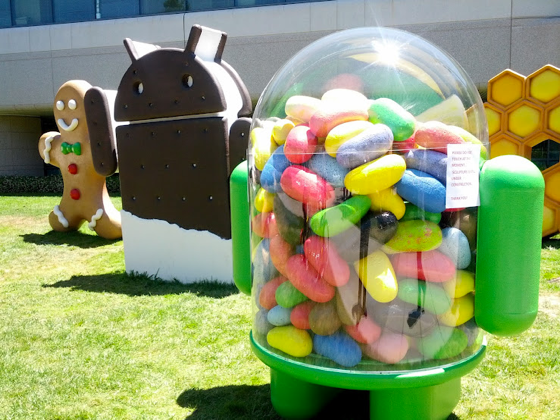 Update 2: Google has posted a video to YouTube documenting the monument's creation, entitled Do Androids Dream of Jelly Beans? — check it out below.