Google has dropped the price of the GSM Galaxy Nexus to $349 off-contract.

Google has just dropped the price of the GSM Galaxy Nexus to an even more attractive price ahead of Google I/O: it's available now for just $349 off-contract from the Google Play device store. The search giant started selling devices directly from Google Play back in late April, and the AT&T and T-Mobile-friendly Galaxy Nexus demanded $399 at that time. Of course, it's not clear if the price drop means that Google is planning to announce a new Nexus phone today or not, though we do know that the Nexus 7 tablet is on its way. Either way, $349 is an extremely attractive price for a contract-free device, and an earlier leak from the Google Play store said it'd be the first phone to get Jelly Bean. Are you going to bite? 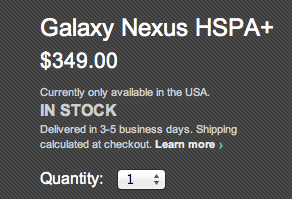 More from this stream Google I/O 2012: everything you need to know