Hands-on impressions of Events in Google+ and the all-new Android tablet app.

Google certainly had plenty to show us at I/O today, but hidden in there were some major improvements to Google+, including the first-ever tablet app for the social network and an all-new Events feature. While it may have been overshadowed by an insane Project Glass demo, this is actually one of the more significant updates to Google+ that we have seen. Today's also the social network's first birthday, so join us for a look at what's changed and what's new if you're feeling a bit sentimental.

We're sure that Google took a look at its competitors and saw one place where it could truly pull ahead: events. The feature in Facebook is little more than a dumbed-down profile page, and most anyone who's used the social network for any length of time quickly learns to ignore invitations as they come in. With today's update Google+ is definitely getting a leg up: events are broken down into three distinct parts — before, during, and after — which serve to make the feature more than just a message board.

At the beginning of this process are truly well-implemented invitations that hope to leave a more lasting impact than its Facebook counterpart. When creating an event you're presented with the usual assortment of options (title, location, time, description, and invitees), but there's another fun little option, called a theme. Themes are basically just a lead photo, but they're a bit more fun because they don't have to be static images. Google's calling them "Cinemagraphs," and much like the similar-sounding Cinemagrams before it, they're still images with a small section of movement. The quasi-GIFs are silly, but it's all about giving the event page a personal touch. Of course, if you're not into the pre-loaded Cinemagraphs, you can upload your own still images or choose from a fairly wide range of "stationery."

Adding to the visual flair is an over-the-top ribbon on the event page that you can open and close with an HTML5 animation like a piece of paper. You'll likely either love it or hate it, but it's impressive to see such interaction implemented on a site like Google+ — these sorts of things far more often found on iOS and Android apps. Aside from the flair, we'd be remiss to move on without mentioning one other feature sure to make Google Calendar users out there happy: events will automatically appear in your calendar, and when you click on them a rich information popup (featuring the moving Cinemagraph) appears. Well done, Google.

Once the party gets going, you enter the "during" stage of Google+ events. Once a guest checks into an event, they're invited to enter "party mode," which will automatically upload and publish any photos you take from the app to the event page. Furthermore, there's a live slideshow option, which will open a fullscreen experience on your computer that will sift through all the photos taken during the event. It all sounds like a fairly good idea, we're really not too sure who will take advantage of the feature. After the fun's over, Google+ sends out reminders to attendees to upload and tag photos taken at the party, and it'll place photos with the most +1's and comments at the top and put all of the rest of the pictures below in chronological order. In all, it's one of the best takes on invites and events that we've seen, and despite all of the flashy features, it works well in the browser.

Outside of the web interface, Google has brought its social network to tablets for the first time ever. The new app is available now (you'll need Android 4.0 or greater to get the full experience and an iPad version is coming soon), and beyond including the new events functionality, Google has seen fit to introduce a totally new design scheme. The app features a very photo-heavy layout that offers cards of content that are dynamically sized to fit in a grid to fill the screen. On a 10.1-inch tablet like the Asus Transformer that we tested on you'll get two rows (in landscape) or columns (in portrait) of content, but on a 7-inch tablet that becomes a single stream of less-digestible information.

The app's design has thankfully been simplified a bit compared to the prior Android app to make it easier to identify new content: profile pictures, text, and photos are all clearly distinguishable (the old app irritatingly showed two versions of a user's picture). However, the Flipboard style animation that loads in updates is a bit too active for our tastes. About fully half of the screen is consumed by updates falling into place, and all of the action puts an undue emphasis on new content, making browsing not as enjoyable as we'd like. There is a bit more good news, however: unlike the web app, there's far less white space, and Google has introduced an option that will tailor content based who you communicate with on your tablet.

The app uses the familiar Holo-style design paradigm in the top left corner featuring a drop-down menu of options and a back button. That back button doubles as a toggle to open a Facebook-style list for quickly hopping from one section of the app to another. This mimics the web interface: links here take you straight to the Home, Profile, My Photos, Events, Hangouts, Messenger, Circles, and Local sections of the app, and below is a handy list of notifications. Unfortunately, the decision to use the same button to go up a level in the app and enter the shortcut menu means that you can't access any of these quick links unless you're at the top of an app. For example, if you're viewing a photo you took, you'd need to hop back up to your profile page before you could jump to the events section. 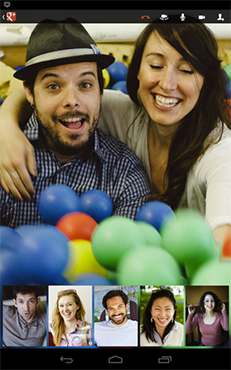 Speaking of events, you won't get quite the full experience on your tablet. You'll still get live updates of photos taken during a party, and there are quick links to get directions and say whether you're attending or not, but some of the flash is gone. Cinemagraphs stand still, for instance, and there's no slideshow mode.

One of the last notable changes is to Hangouts, which have gained a new "lean back" mode (like that found in YouTube) that's designed specifically for tablet use. The fullscreen mode has a tasteful dark palette, and one user's feed takes up most of the screen while others are represented by small thumbnails along the bottom of the app.

The Delta isn't great enough yet

While Google made a point of saying that the app was designed for tablet use, the standard Google+ app for Android phones has also been updated with nearly an identical feature set. Just like the 7-inch tablet form-factor, you'll only get one row of content (instead of the more tasteful layout found on larger screens). We can't help but be slightly disappointed that the tablet app is in many ways just a larger version of the phone app, but overall, this is the best Google+ interface we've seen. Events that sync with Google Calendar is a huge boon, and we can get behind the "before," "during," and "after" system. Ultimately, however, it all comes down to whether or not your friends are active on Google+, and while the company touted some usage stats during its presentation today, for many that just isn't the case yet. There may be a point when Google's improvements over Facebook will start convincing users to switch, but we're not there yet.

More from this stream Google I/O 2012: everything you need to know