It's been evident for a good long while now that Google's big announcement at I/O 2012 was going to be a tablet to do battle with Amazon's Kindle Fire. Whether you were asking anonymous Asus executives, upstream component makers, or Andy Rubin himself, Google's mission over the past few months has been to reassert itself in the tablet marketplace — and the strategy chosen for doing so has been to assault the low end of the pricing scale.

It's been evident for a good long while now that Google's big announcement at I/O 2012 was going to be an Android tablet to do battle with Amazon's Kindle Fire. Whether you were asking anonymous Asus executives, upstream component makers, or Andy Rubin himself, Google's mission over the past few months has been to reassert itself in the tablet marketplace — and the Nexus 7 shows that the strategy chosen for doing so has been to assault the low end of the pricing scale.

If you can't beat the iPad, undercut it

This is an entirely sensible approach for Google to adopt since Android isn't yet competitive with iOS in terms of tablet user experience and application quality, but Amazon clearly beat Google to the $199 punch with its own Kindle Fire — what is Google's trump card here? The answer, as it turns out, is wider distribution. Yes, Google expanded its Play Store to include movie and TV show purchases plus magazines — to better compete with Amazon's enormous content library — but it's the fact that the Nexus 7 will be on sale in Australia, Canada and the UK that truly gives Google the edge. 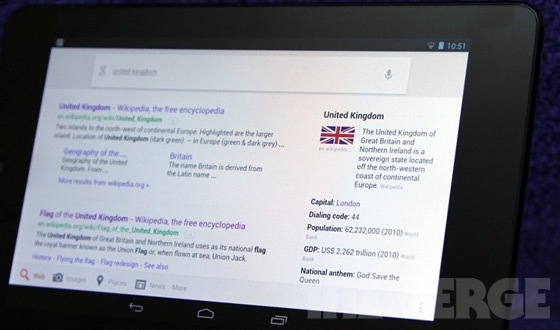 If there was one consistent reaction to the Kindle Fire's launch from outside the USA, it was a deep sigh of exasperation. In terms of its internet and media consumption habits, the United Kingdom is pretty much the 51st state, but unlike the first 50, it's subject to its own copyright regime and anyone wishing to distribute movies or music needs to sign whole new agreements with content owners. The result is that the rest of the world sits on the sidelines while Americans enjoy the Kindle Fire and other US-only services like Turntable.fm and (until recently) Netflix. It's frustrating for consumers and is creating a bubble of unfulfilled demand.

The rest of the world is crying out for a commodity-priced media consumption tablet, and Google's ready to deliver

In beating Amazon to a broader international rollout with its media tablet, Google is laying an essentially uncontested claim to three important English-speaking markets. Last summer's £89 fire sale of HP TouchPads was greeted with such a ravenous appetite that most stores sold out of the webOS slate within minutes. That suggests there's a price point where buyers are no longer discerning about things like app ecosystems and future support, and simply feel compelled by a well known brand sold at a super low cost. The 8GB Nexus 7 costs double the TouchPad's rock-bottom price in the UK, at £159, but that's still far below any comparable device in the local market. Apple will sell you a second-gen iPad for £329, and you might be able to find a Motorola Xoom 2 Media Edition for around £280, but there's no pesky Kindle Fire to put a crimp in Google's plans.

Not that the Nexus 7 can't stand up against the Fire. Beyond the identical price in the US, the two tablets share a number of basic features and specs: both have 7-inch IPS displays, 8GB of storage on the entry level model, no 3G connectivity options, multi-core processors, and an upgraded UI that emphasizes speed and fluidity. Just like the Fire, the Nexus 7 is being sold with little or no profit margin, aiming to serve as the conduit to its parent company's software and services. The Fire has the Silk cloud-accelerated browser while the Nexus 7 brings Chrome for Android out of beta. The Fire gives you Amazon's Appstore and content library, while the Nexus 7 is "made for Google Play."

Where the Nexus 7 excels is in adding extras like NFC, Bluetooth, and a gyroscope, increasing the RAM to 1GB and screen resolution to 1280 x 800, and significantly upgrading the processing and graphical capabilities with a Tegra 3 system-on-chip. Though Google couldn't resist some specious Tegra 3 mathematics — adding the four processing cores to the 12 in the GPU and declaring it a "16-core machine" (which is, in itself, inaccurate, since there's a fifth low-power core that takes the total to 17) — it's an undeniable achievement to deliver that chip's performance at the $199 / £159 price point.

Zero profit margin, but hardware's not where Google aims to make its money

Amazon won't be standing still, with a Kindle Fire successor rumored to be in the works for this summer, but the Nexus 7 forces it to look outside its home market. The developer ecosystem seeds are already being sown, now it's just a matter of expanding Kindle Fire availability beyond US borders. Either that, or watching the Google juggernaut steam by.

We already knew that Google delayed the Nexus 7 specifically so it could match the Kindle Fire's price, and all indications are that it has the specs and extra features to at least give Amazon's tablet some healthy competition. But it's once you step outside the US, to the green forests of Canada or red deserts of Australia, that you'll really see the potential for Google's new Nexus 7. Those underserved markets have been crying out for their own commodity-priced media tablet and, come this July, Google will deliver it.

Google's Nexus 7 Android tablet: everything you need to know