The Verge traces the Nexus 7 back to its roots as a scrappy Asus tablet.

Share All sharing options for: Nexus 7: how a budget Asus tablet vanished — and reemerged as Google's Kindle Fire killer

I'd be willing to bet that most people believe Google's Nexus 7 tablet is a wholly new design: that Google contracted Asus to produce a $199 Kindle Fire killer in just four months, like Andy Rubin and Asus chairman Jonney Shih told AllThingsD last night.

The truth is far more complex. The truth is that the Nexus 7 is the Asus ME370T, an Android tablet whose destiny has repeatedly changed.

At CES 2011, a year and a half ago, Asus announced the Eee Pad MeMO, a 7-inch tablet with Android 3.0, a dual-core Qualcomm processor and one feature ahead of its time: a capacitive stylus for drawing and painting, with a dedicated stylus slot where it could hide. One year later, Samsung's Galaxy Note took the Android-tablet-with-a-stylus formula to the bank, but the Eee Pad MeMO languished in ignominy before its eventual Taiwan-only release.

Why do I bring up the $499 MeMO? Because one year later, at CES 2012, we found it alongside a second slate: the Eee Pad MeMO ME370T. The ME370T had pretty much the same specs, including the Qualcomm chip, and we'd heard it would have a stylus as well. Originally, it seemed to be intended as the cheaper cousin to the original MeMO, now known as the Eee Pad MeMO 171. More importantly, it also just so happened to look a whole heck of a lot like the Nexus 7 that Google just unveiled... only with a thicker rim, a rear-facing 5 megapixel camera, a microSD slot, and a Micro HDMI port.

These are some pictures of that device:

As we were leaving our CES appointment, though, an Asus representative stopped us in our tracks. There had been a few last-minute changes to the ME370T, they said: It just might wind up with a Tegra 3 processor, and the stylus just might vanish along with the Qualcomm chip.

The very next morning, at Nvidia's press conference, Asus CEO Jerry Shen made a surprise appearance to reveal the coup: not only would the ME370T have a Tegra 3 processor, but it would cost just $250. As you'd expect, the excitement was palpable, and we asked Asus about the device repeatedly in the months between, but mysteriously, that was the last time the company would speak to us on or off the record about the ME370T. 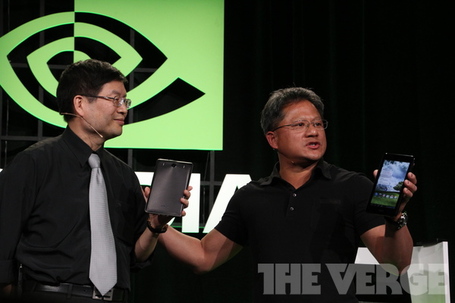 Rumors started to swirl that Google was building a $199 Nexus tablet with Asus as manufacturer. Our sources confirmed the story.

Then, one month ago, we stumbled across a picture of the ME370T: At the company's annual meeting of shareholders, Nvidia VP Rob Csonger presented "Kai," a plan for the GPU manufacturer to democratize the tablet experience. The tablet picture was supposed to be representative of a whole family of low-cost Tegra 3 tablets targeted at $199.

One day later, I got the chance to ask Nvidia CEO Jen-Hsun Huang if he thought Nvidia's $199 tablet program and Google's $199 tablet program might compete. He saw through my bluff: He started saying something about not wanting to speak for Google... but then he paused, smiled, looked me right in the eye, and said: "I do hope their tablet is monumentally successful... because it will be great for Android."

Sure enough, the Nexus 7 is a recipient of Nvidia's Kai program, and it's not the only one. The Acer Iconia Tab A110, for example, is also a Kai tablet. Nvidia told us it's "running hard" to push a number of inexpensive new Android tablets, and that shrewd negotiation and economies of scale are bringing down the cost. Apparently, the devices are still pricey enough that Google is only breaking even with the Nexus 7, and even then, a number of features didn't make the cut. This ME370T won't come with a stylus, an HDMI port, or a rear-facing camera, and comes with 8GB or 16GB storage compared to the 16GB and 32GB configurations originally planned, and the microSD slot to expand that capacity at will is also not included here.

So if the Nexus 7 has been coming for far longer than four months, what did Jonney Shih mean? Asus tells us that's how long it took to re-engineer, design, tool, and manufacture the ME370T into the immediately impressive Nexus 7 we see today. Among other things, it has a brand-new motherboard, a revised Tegra 3 T30L chip, a laminated IPS display, and a revised, grippier textured rear casing. "While the base design and setup was completed in the 370T to meet a certain price point and option list, the efforts required to get that design to $199 meant going back to the drawing board and starting over on just about every aspect of the unit," an Asus rep told us.

But if Asus, Nvidia, and Google hadn't made it a priority to challenge Amazon's Kindle Fire, the ME370T could have been just another outdated Android tablet on the pile.