What's in your bag, Ellis Hamburger?

What's in your bag? is a recurring feature where we ask people to tell us a bit more about their everyday gadgets by opening their bags and hearts to us. Show us your bag in this forum post. This week, we're featuring the esteemed Ellis Hamburger.

Have you heard? Backpacks are back! They're stylish, functional, and full of things that communicate what kind of person you are. Here's what kind of person I am based on things in a bag. For the most part, I like to keep things simple, paying next to nothing for things I'll likely lose.

For the things I put my hands on all day every day, I prefer some more high quality gear. On a final note: you may notice that there's no camera in my bag. It's sad, really, and when I inevitably have to shoot pictures of iPhones every day, I end up begging Reviews Editor David Pierce for one of his tester devices. For David Pierce's sake, I'm hoping to grab a Sony NEX-F3 sometime soon, unless you have a better idea in that price range. 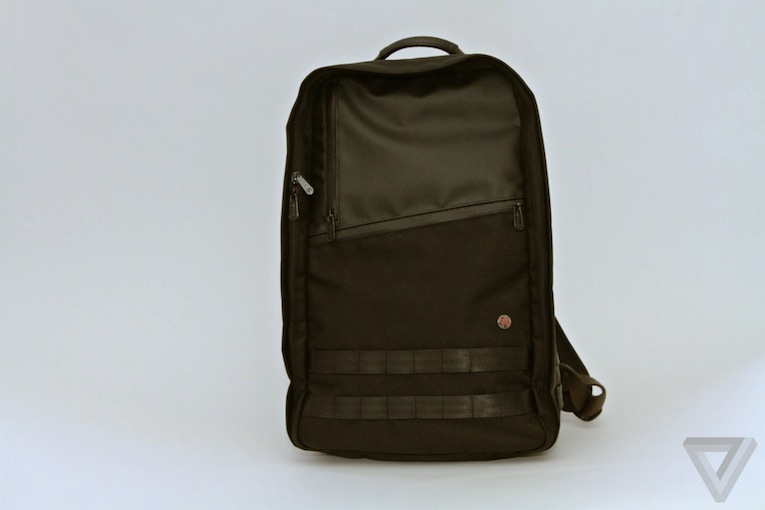 I hate spending money. I really really hate spending money. Unless I'm spending money on something I'm going to be using all day every day, like an iPhone, or a backpack. This Token backpack is made of kevlar-infused titanium steel-wool mesh chain-mail mythril, for all the times I'm up against orcs and such at CES. I think the company simply calls the material "ballistic nylon," which makes me think that this thing will protect me from projectile ball bearings. I'll bet it would. But anyway I like the leather handle on top, and the various compartments for things, and the waterproof zippers because my umbrella frequently breaks or I forget it somewhere. There's a nice padded laptop sleeve, as well as a main compartment with zipper pockets. Those strap things you see? Not for carabiners. You can attach all sorts of things like a water bottle holder to them, which Token also sells. Oh, and the main compartment zips alllllll the way open, which turns it into a tiny suitcase, of sorts. I like that.

These medium-size wayfarer knockoffs from a street vendor on St. Mark's Place work great. They allegedly protect me from UV rays, too, according to the vendor. Who knows. What I do know is that I look as cool as you in your hot Ray Bans for, like, $9.00. Sidenote: if you catch me wearing my sunglasses on the subway, it's out of sheer laziness, not out of pride.

As Paul Miller once said, "you may've noticed that I have an iPhone, and an iPad, and a MacBook Air, which makes me a bad person." I too am a bad person, albeit a bad person with aluminium productivity tools! The design is so inevitable, you see, I just can't stop buying the things. But the MacBook Air really is a perfect machine for a mobile businessman. It's thin, light, and has an edge that can cut your hand if you're blogging too hard. My favorite thing about the MacBook Air, however, is its solid-state drive. It's my first computer with a SSD, and boy does it go a long away. The computer just doesn't age like a normal computer would, and 4GB of stock RAM is plenty for having various iterations of Chrome, Photoshop, Limechat, Adium, Evernote, and EasyBatch Photo open. Seriously! Oh, and that glass trackpad. It's just...so....glassy. This computer makes me think that we will soon reach the center of the computer singularity, where things cannot get much better. At least until the next round of Intel chips comes out.

So this phone is my second iPhone ever, and while I'm getting a bit bored by iOS's overall unwillingness to change, I still think this thing is the most reliable device out there. And it has Sparrow for iPhone, my favorite app. And it works with tons of accessories and great cases, like the $10 (from Amazon) Incipio NGP case (not pictured). I'm constantly embarrassed by the fact that I need a case, but I do drop the iPhone like crazy — mostly when I'm fussing about with headphones while they're plugged in. The case is pretty minimalist and durable, though. Incipio says it's made out of "Next Generation Polymer," which sounds fancy, but really means that it's a hard case that's soften enough that you can wedge your iPhone into it, which is great, because I don't like those multi-piece cases. Plus, it has a lip that hangs over the top of the device so if I drop it face-down the screen won't break unless there's a pebble villainously waiting there pointing straight upwards. Oh, and why 64GB? I have lots of...... files. 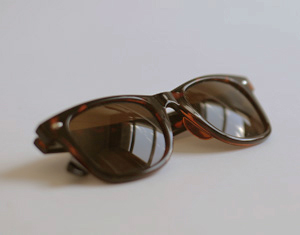 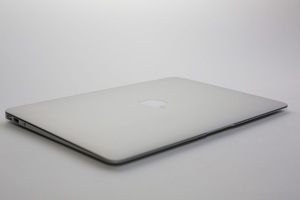 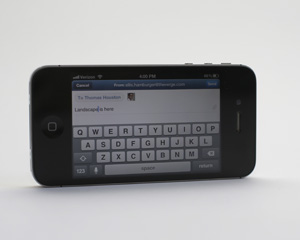 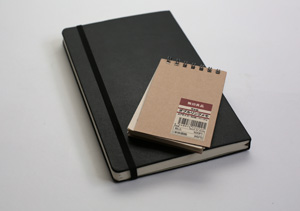 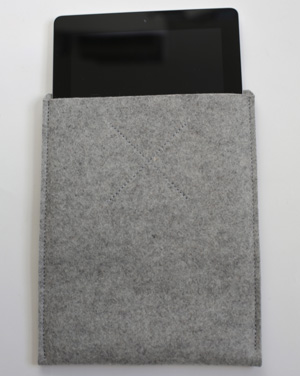 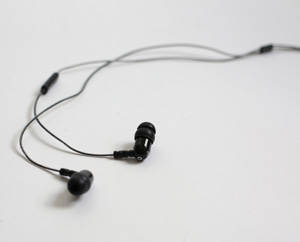 Yep, I too have a Moleskine notebook, but not because I want to be a famous ex-pat writer. Ok, maybe I do a little bit, but I carry this thing mostly for situations where I'm conducting an extended interview with somebody. I like feeling layer upon layer of paper underneath my pen as I write, and even if I have the thing on my leg, it still feels like I'm writing on a table. That little Muji notebook there? It's for scribbling frantically during times when I need to walk and scribble while I'm listening to someone. It's kind of pointless, though, because since it's flexible and not too thick, I end up writing poorly and can never read what I wrote.

Here's my iPad. Here's my pure luxury device. It really has no place being in any iPhone owner's hands unless they got it as a gift (like I did), because it really really is just a big iPhone. If you have a need for a big iPhone, then you'll love an iPad, but it's only essential for a few scenarios: sitting in bed, sitting on the couch, sitting at the airport, sitting on benches or chairs, and sitting at coffee shops on Sunday morning when you're trying to make it look like you're "doing art" while sipping a double espresso with far too much sugar in it. My favorite thing about the iPad is actually Paper, a drawing app I wrote about when it launched. For once, here's an app that's not overrated, an app I've integrated into my daily life. For sketches and to-do lists and stuff, I've switched from Moleskine to Paper, because there are colors and brushes to use, and because I like that it keeps my notes and musings on Sunday mornings in digital form. Taking digital notes is one way to "consolidate your digital life." That's my motto.

The case is from Etsy dealer Old Calgary, and is a bit pricey, but it's made out of some kind of wool-felt-badass combo and fits my iPad perfectly. The company is nice enough to build two versions: one for your iPad, and one for your iPad with a Smart Cover on it, if you so desire, to ensure a snug fit. Nice!

I bought these cheapo headphones at the recommendation of one of my favorites sites, The Wirecutter. I need earbuds with me at all times, whether it's for Skype calls with colleagues, listening to music, or just waiting for that "boop" to indicate I have a new mail in Sparrow for Mac while I'm working full screen on something like this post. So these headphones are not fronting as some fancy Dr. Dre Beats by Jay Z headphones. They are pieces of junk, but even so, they sound better than the earbuds that come with your iPhone. And they won't get you mugged on the street late at night because they make you look poor. The bass on this set is impressively full, and the mids are....really, I'm not much of an audiophile. They sound fine. These headphones are super cheap and they work, even if they make a gross suction noise when you put them in your ear. It's like a foley sound effect from a creature in Prometheus flip-flopping around. It's gross, but OK.

When I have a moment to listen intently, I use Klipsch Image ONE headphones, which are the first nice pair of headphones I've ever bought. I love listening with them, but like any cans, they're a bit bulky and tough to carry around. Lots of times I forget them either at the office or at home. In this case I forgot them at home.

I write lots about apps, and when you write about apps, you're inevitably forced to take pictures of lots of screens, which are really really dirty things. Here's a glasses cloth I got from somewhere. Then there are my business cards. Vox Media is nice enough to let us pick the graphic on the back of our card, and I choose some artwork by Stanley Donwood, which may be more familiar as the background (high-res) of Radiohead's In Rainbows album. It's hot lava or glass or something, and I thought it would contrast nicely with the white Verge logo. And there's a big paperclip. Don't know why it's in my bag maybe it'll come in handy some time.

As soon as I graduated from yearly first-day-of-school trips to Office Max, I started carrying around a standard Bic pen. These things are impressively durable, reliable, and fine. The Wacom Bamboo is no longer my favorite stylus in the world, but after I finished part one of my truly epic stylus round up, I bought a Bamboo. It's still an all-around great stylus for iPad combining great nib diameter and conductivity with a handsome industrial design. And the Sharpie — there are just so many times when you need to label something and a Bic won't do the trick.

Blogging ain't easy, especially when you have terrible allergies. Generic ibuprofen staves off the occasional headache while Afrin is just a miracle in general. Seriously, there is no medication I've ever used that provides as much instant gratification as Afrin. If your nasal passages are swollen or dry (like mine frequently are) and preventing you from breathing, Afrin can help. Its vasoconstricting chemicals shrink your capillaries and effectively open up your nasal passages completely within about ten minutes. Be wary, however. Using Afrin for more than a few days can cause "rebound congestion" and make your sinuses feel even worse. And also, get the spray (PumpMist™) variety, not the drip variety. Yes, I've memorized the label and all details about vasoconstrictors from WebMD.

The POWERSTICK holds about 30% of a single iPhone charge in my experience, which isn't great, but I found it on the ground at CES and it works. Most of the time, you really only need another 15% out of your iPhone at the end of the day, and this thing is super small and light and junky so I won't be upset if I lose it.

Editor markup for Ellis Hamburger bag photos. This is only visible in the story editor. 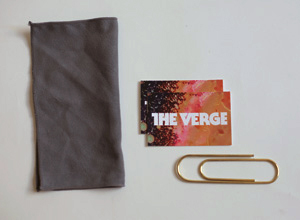 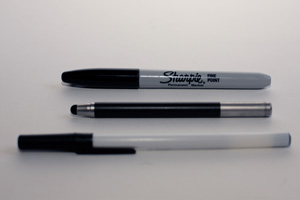 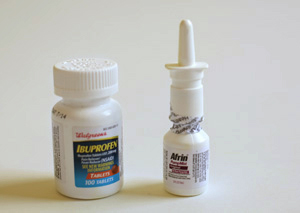 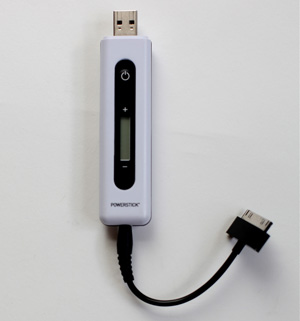