The B612 Foundation wants to launch a telescope into deep space orbit around the sun to look for dangerous asteroids.

Via BBC News | Source B612 Foundation

Non-profit group the B612 Foundation is launching a project which it hopes will see a telescope launch into deep space to search for dangerous asteroids. B612 was founded in 2002 by astronauts and astrophysicists, some of whom originally worked at NASA, with the goal of protecting Earth from asteroid collisions. Its plan involves launching a telescope, named Sentinel, in 2017 or 2018 towards Venus and have it orbit the Sun, where it would then survey the Solar System to look for asteroids larger than around 100 feet in diameter. The entire mission would last five and a half years, during which time B612 expects to detail the orbits of 500,000 as-yet-undiscovered asteroids.

The foundation already has a potential design for the telescope and a partner in Ball Aerospace of Colorado, which has built similar telescopes such as NASA's Kepler. B612 also has an agreement with NASA to use the space agency's radio systems. The only thing needed now is cash. The project has an estimated cost of "a few hundred million" dollars, and the foundation hopes to attract private, philanthropic investors with the promise that the Sentinel telescope will "protect humanity, map the inner solar system, and enable exploration." Ed Lu, former NASA astronaut and CEO of B612, tells BBC News that "eventually, we will have to deflect an asteroid, we know that. Because essentially, we're playing cosmic roulette. We're flying around the Solar System with these other objects and the laws of probability eventually catch up with you." 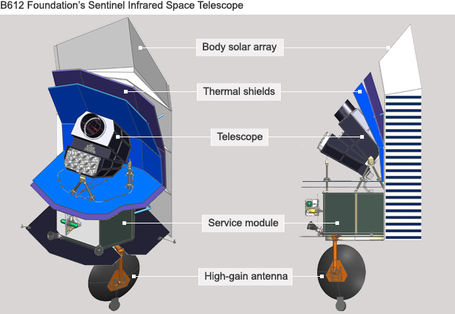