So, I was doing some RSS spring cleaning and, in the vein of the "What's on your desk?" and "Show us your homescreen" posts, I thought it'd be fun to discuss:

I'm actually fairly late to the RSS party, relatively speaking. I started actively following RSS feeds about two years ago; I had just gotten the first-generation iPad, and found - like many people - that it was a great device for consuming information. I looked for a way to consolidate the news I was interested in and bring it to my new toy, which lead me to Reeder and thus Google Reader. 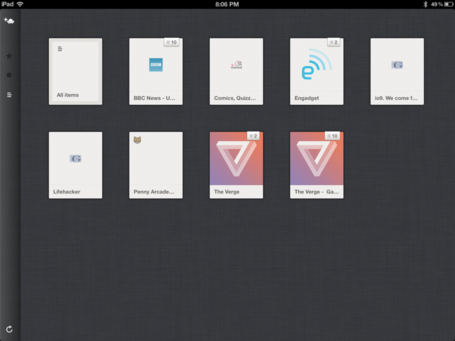 Reeder is, unfortunately, not a universal app...but it's still worth getting for both the iPad and the iPhone, if you have both. Yes, it really is that good. I don't want to get bogged down in too much detail, suffice it to say it's beautiful and simple, yet powerful. 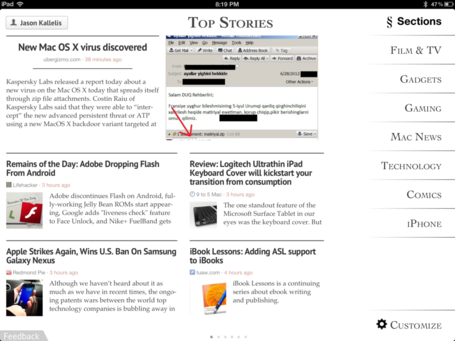 Zite, on the other hand, is billed as a "personalized magazine" for iPad - think Flipboard with less social features and a less-refined interface. Technically I don't use it to view my Google Reader, but instead to glance through other sites that I don't follow on a regular basis. It seems pretty good at picking out the kind of things I'd be interested in - not surprising, since it learns from both your Google Reader and your Twitter. 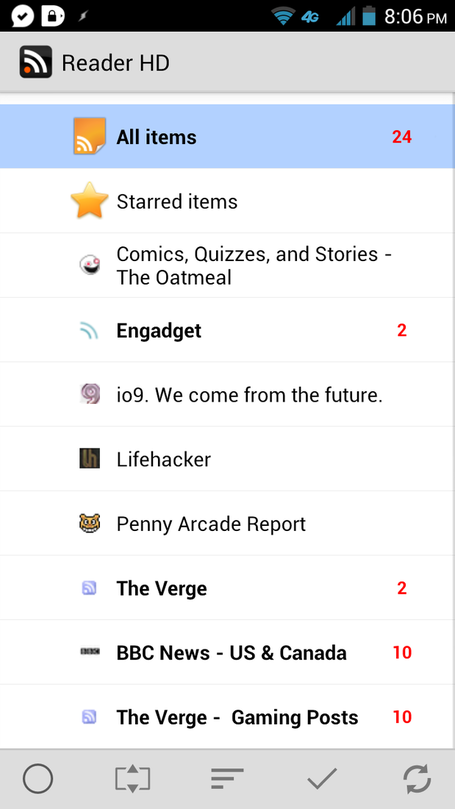 Reader HD is, so far, the best Google Reader app I've found on Android, and I've tried several. I actually discovered it thanks to a commenter on my 29 Days With Android post. It's still not up to Reeder's standards, but it does what I need in a phone RSS app.

Flipboard deserves special mention, as I often use it to quickly catch up on various news sources when I'm far behind. It's not the best dedicated Google Reader client, but it does sync with it, and it's great when I'm in a hurry.

Why? I want to have at least one feed of "normal people" news, rather than the nerd news I'm so fond of, so I'm giving this one a shot. Until recently, this spot was held by CNN...but, well, more on that in the next section.

Why? Yeah, yeah...I know. But, despite their recent loss of talent to The Verge, I enjoy getting multiple opinions and reviews of the big tech events and products. I typically avoid the commenting community there, though, as somehow every single post seems to come back to Google/Microsoft vs. Apple. It's actually pretty impressive, in a sad sort of way. Honestly, I've been tempted to give up on Engadget all together, but for now, it makes the cut.

Why? Despite my non-trivial amount of disdain for Gawker's new commenting system, io9 continues to be a reliable source of general geek news. I do miss scanning the comments, as I would often discover good, intelligent discussions, but despite that, the news is solid and - more importantly - I've yet to find an equivalent site.

Why? The only other Gawker site to make the cut...I like community at Lifehacker (though I'm sure the new commenting system will ruin that as soon as it's implemented) and, like io9, the articles are fairly unique. I particularly enjoy their blend of technology with lifestyle.

Why? Because it's hilarious, of course - but also because it's not updated often enough to be part of my daily "Comics" bookmark folder.

Why? This one is a fairly recent addition, but they've had enough interesting gaming articles that it makes the cut, for now. It's not a particularly busy feed, either, so at least it's not spamming me by keeping it around.

Why? Do you really have to ask? In its relatively short existence, The Verge has proven to be my favorite tech-news site, with fantastic reporting, best-in-class articles, and a generally great community that the staff is more than willing to highlight.

Why? It's The Verge...plus gaming. What more could you want?

Why? As I mentioned above, I wanted at least one feed that was just "regular" news, and not just tech/gaming news.

What filled the void? BBC News US & Canada

Why? I'm repeating myself yet-again, but as stated previously, I wanted at least two tech sites, if only to get multiple opinions, and at the time, I was already subscribed to Engadget

Why did you leave? A few months ago, Gizmodo posted a story about an iPhone bug that allowed them to view a stranger's information. I won't post the link to it, because I don't want them to get any more hits, but basically, they chose to report on this story by actually showing that user's information, to the point where anyone who knew him would've easily been able to identify him. I found this to be unnecessary and - to be frank - disgusting - so I finally banned them from my feed.

What filled the void? The Verge

Why? I use quite a few Apple products, and I found iLounge occasionally had good reviews and in-depth articles.

Why did you leave? There's next to no commenting community, and the articles iLounge posted that I actually cared about were few and far between. I'll just seek them out without a dedicated RSS feed.

Why? I was looking for a new job, so I set up an RSS feed to bring me job listings based on criteria I specified.

Why did you leave? I found a new (much better) job, though sadly not through Indeed.

Why? I was interested in gaming news, and after being on N4G for awhile, I found Kotaku was the site I went back to most often, primarily because of the commenters.

Why did you leave? Well, as I said, was primarily interested in Kotaku for the commenting community, so the recent revision of the commenting system has ruined the site for me.

What filled the void? The Verge's Gaming Feed (aka Polygon)

Why? As I said, I own several Apple products, and wanted more Apple-based information.

Why did you leave? I've been reading their articles less and less...partially because they're just repeating information I already learned from another source (usually The Verge or Engadget), and partially because of their obviously-biased tone.