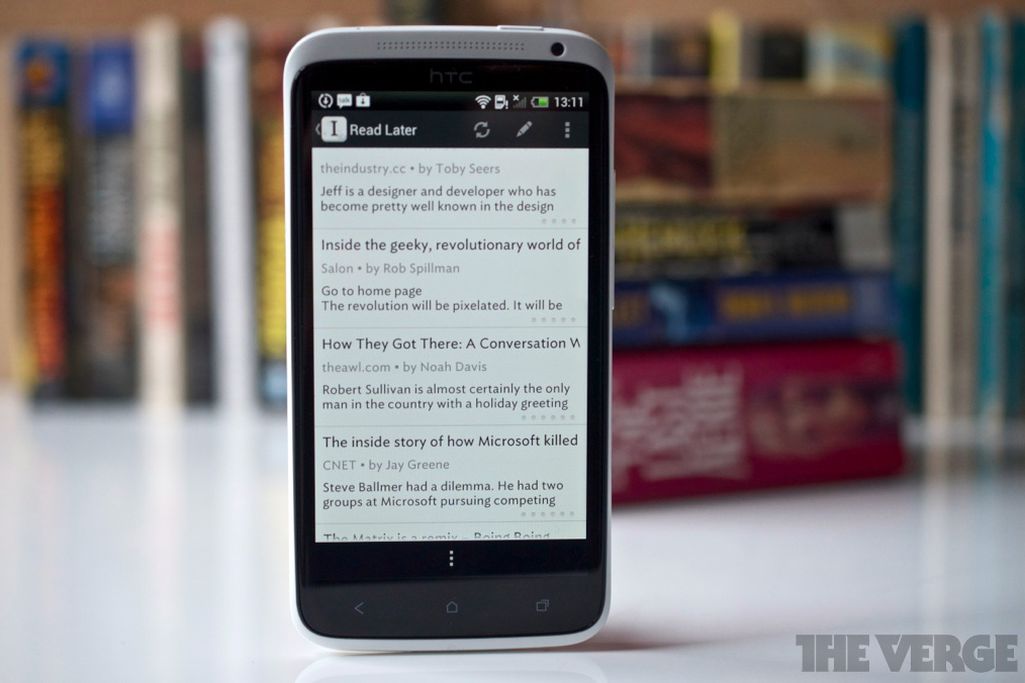 "Android is not in my world. It's not in my attention span most days. Thinking about the iOS app is a full-time job, and staying competitive on iOS is a full-time job." This quote comes from Instapaper creator Marco Arment not even three weeks ago in an interview with Joshua Topolsky on On The Verge.

Evidently, Arment was keeping a pretty big secret. Instapaper for Android launches today for $2.99 on smartphones and tablets, and you can find it in the Google Play Store and soon in the Amazon App Store and Nook Store. What makes the app launch so significant is that aside from Instagram and Flipboard, Instapaper might just be the next-most-desired (and elusive) Android app ever. The excitement surrounding a possible Instapaper Android app has not been just because people wanted the app itself, but also because creator Arment often publicly expressed distaste for building on Android — almost out of principle. "I think it was the success of the Kindle Fire and the Nook that tipped my hand," Arment told us.

So, he entrusted the Instapaper name to developer Mobelux, which has previously built Tumblr for iPhone and Android, as well as Carousel, a handsome Instagram viewer for Mac. Mobelux wasn't the winner of the app-building challenge Arment started in jest, but was instead a great fit with a compatible heritage. Arment met Mobelux co-founder and Creative Director Jeff Rock all the way back in 2008 when Tumblr was in talks to buy Rock's Tumblrette Tumblr client for iPhone. Arment (still full-time at Tumblr) got to know Rock and his team, who quickly became the backbone of Tumblr's mobile app strategy.

After Arment's scuffle online over the fiscal viability of building an Android app (and several years of hanging out with Mobelux at WWDC), he approached Rock and asked if he was interested in building an app for him. "[It] seemed like a perfect project to collaborate on," Rock told me, so Instapaper for Android was born, a bit longer ago than you might think. But is the app any good? Read on to find out. 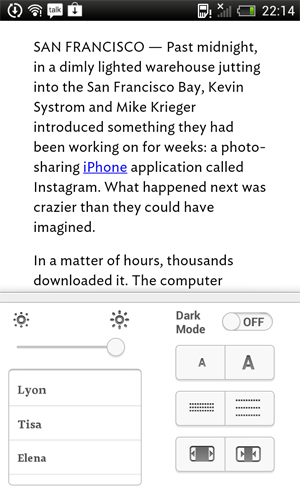 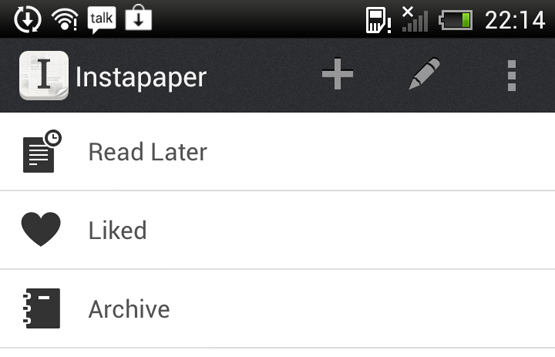 Instapaper for Android looks a lot like Instapaper for iPhone, and that's a good thing. There are Holo-ified elements aplenty, but on the whole, the Instapaper experience remains the same, minus a few key features. When you open the app, you're greeted by familiar Read Later, Liked, and Archive links. Tap one and you'll notice that everything from the gray source line to story previews are here. Tap an article and you're instantly reading an article stripped of ads, website chrome, and other random distractions. All is well. The dream has come true. You're reading Instapaper articles using an Android app that seems identical at first to its iOS counterpart.

But as you read, you'll notice two things first and foremost: you can't read in full screen and there's no pagination. The status bar is a constant distraction at the top of your screen, as are two to three menu bars (based on whether your phone has navigational buttons or not). If you use the HTC One X, for example, you'll see three menu bars at the bottom of your screen: Instapaper action buttons, a useless Settings button, and your Android navigation buttons. Believe it or not, there's no way to go full screen in Instapaper for Android, an almost sacrilegious mistake on Mobelux's part. Fortunately, an issue like this isn't difficult to fix.

Yet, many of Instapaper's trademark nuances (like font choices) remain the same and as refined as ever. From Lyon to Elena to Ideal Sans, there's no shortage of font options. And of course, you can alter screen brightness, line spacing, margins, and font size while you're reading. There's also "Dark Mode," which is great for reading at night, but Sepia mode is notably absent. Also missing are the "Friends" and "The Feature" article recommendation areas, as well as "Web" (which lets you browse and add articles) and "Search," a subscription-based full text search tool for finding articles you've bookmarked. In other words, you're unable to find new articles to read from within Instapaper like you can on iOS. 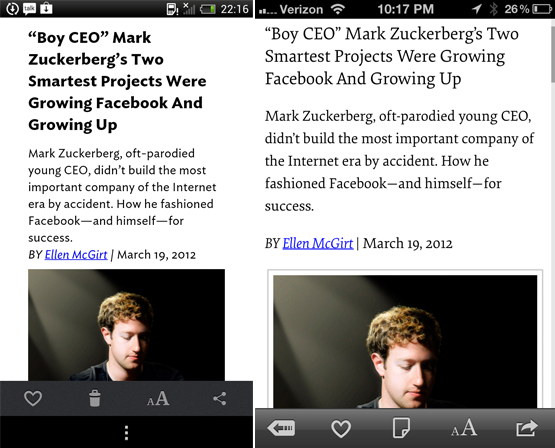 While there are several places where Instapaper for Android falls short, there are a few places where Android really lets Marco Arment's concept spread its wings. While Arment has done his best on iOS to incorporate sharing articles to places like Evernote, Tweetbot, Simplenote, and the other usual suspects, these features required work on his part. In an Android app, with little work on the developer's part, you can share to just about any app or social network present on your phone (like Dropbox). And of course, you can pick whichever email client or chat app you'd like to use to mail an article. Additionally, installing Instapaper for Android adds an "Instapaper" button to the Share menu when you're inside other apps, like the web browser, so you don't need to install a bookmarklet in order to save articles while you're browsing on the go.

We also tested Instapaper for Android on 7-inch Android tablets and even a HP TouchPad running Cyanogen. The app always ran smoothly, and for larger screens, adapted accordingly by displaying article boxes instead of rows — a nearly identical experience to the one you'd find on Instapaper for iPad.

While Android still isn't Arment's top priority, we're glad he was brave enough to entrust his baby to the hands of another for distribution on the most popular mobile platform. The result is a decent 1.0 app that isn't as polished as something you'd expect from Arment. A pencil icon in your the app's main screen highlights when you tap it, but doesn't do anything unless you have custom-created folders. The three-dotted menu bar at the bottom of the screen on our HTC devices often does nothing at all when you press it. The app doesn't include geo-fenced automatic article syncing like Arment added recently for iPhone. Yet, the app will undoubtedly please hundreds of thousands of users, and is a sign that some kind of parity between iOS and Android apps is coming. In fact, Mobelux assured us that updates are coming soon to bring the app up to par with Arment's iOS app. Until then, go grab Instapaper for Android — it's your next Instapaper client.

Be sure to check out our interview with Marco Arment about Instapaper for Android right here. 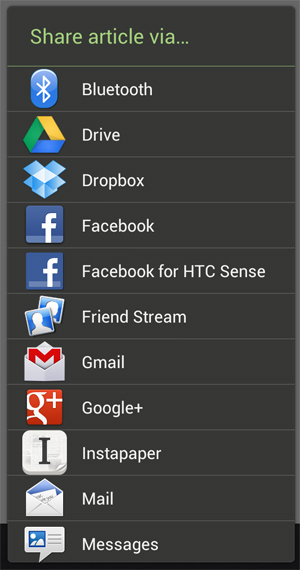