Matrox's DS1 Thunderbolt docking station is arriving in September for $249. The device includes a a pair of USB 2.0 ports, a high-speed USB 3.0 port, a full-sized DVI port, gigabit ethernet, and separate mic and headphone ports.

Share All sharing options for: Matrox's $249 DS1 Thunderbolt Docking Station has USB 3.0, but only one Thunderbolt port

If you’re looking for a new Thunderbolt dock and you’re put off by the $299 price tag on Belkin’s Express Dock, video equipment maker Matrox would like you to consider its DS1 Thunderbolt Docking Station. At $249 it’s $50 cheaper than Belkin's box, but it’s also missing what some would consider to be the most important ports: neither a second Thunderbolt port or DisplayPort for daisy chaining, nor a FireWire 800 port are anywhere on the device. Unlike its competitor, it does have a high-speed USB 3.0 port, however, alongside gigabit ethernet, a pair of USB 2.0 ports, full-sized DVI, and separate mic and headphone ports. The DS1 will be arriving in stores in September, around the same time as Belkin's device. 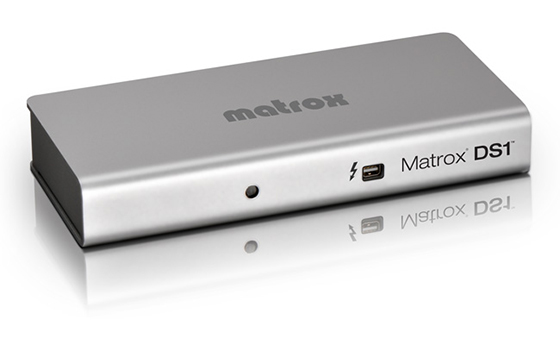