Last week Gigabyte announced its X11 laptop, an 11.6-inch machine made from carbon fiber that, at 2.1 pounds, the company claims is lighter than the equivalent MacBook Air. We just checked the X11 out in person here at Computex Taipei, and it certainly doesn't weigh too heavy on the arms — though the tradeoff is a slightly less solid feel than we're used to from Apple's unibody design. The glossy finish is also one of the more prone to fingerprints we've seen.

The X11's design is fairly impressive, but we're not sure how much credit to assign to Gigabyte — right across the other side of this room is a laptop from Inhon with an identical chassis (see below). If the lightness brought by carbon fiber sounds appealing to you, it looks like you'll have a variety of vendors to choose from. 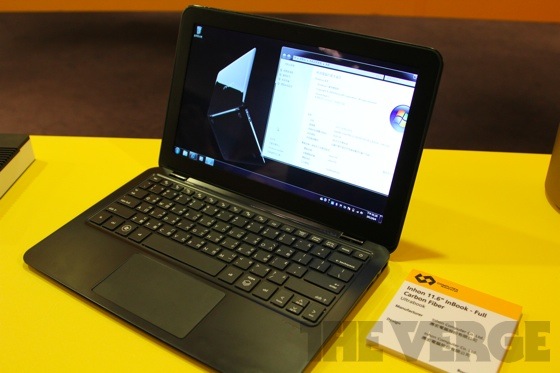