Facebook is rolling out a redesign to the news feed that will show larger pictures inline.

Facebook's status as the world's largest photo-sharing network has been talked about a lot recently, and the company's continuing to acknowledge the importance of pictures by tweaking and improving how it displays your shots. The latest change, first reported by TechCrunch, is to make photos pop even more in the site's news feed both by displaying larger versions of shots, and showing more at once. The new design is apparently being rolled out slowly, and will show one full-column photo above three smaller shots in the feed — the new look matches a similar tweak to the Facebook mobile interface from a couple of weeks ago. Facebook's clearly emphasizing photos, and making sure you've got a nice big place to show off the shots you took with the Facebook Camera app. 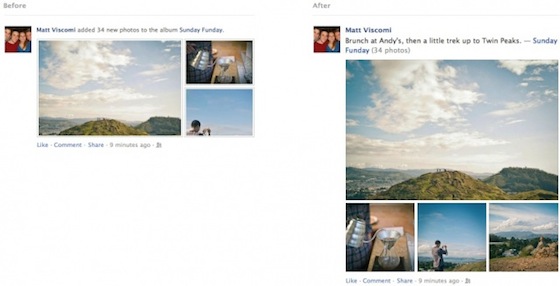