Qualcomm took the opportunity at Computex to pledge support for Microsoft's next-gen ARM-friendly operating systems and simplify its branding a bit.

Qualcomm's Rob Chandhok took the stage at the Computex Innovation Forum in Taipei today, and he revealed something that makes quite a lot of sense: Microsoft's Windows Phone 8 will include designs based on Snapdragon chips. Considering that the company's processors have monopolized Windows Phone 7 handsets since day one, and our sources tell us that Sprint already has such a handset in the lab, it's not much of a surprise, but it's nice to have official confirmation that Qualcomm's integrated LTE silicon will appear in next-gen Windows Phone devices. We're hoping to get a look at Windows Phone 8 on June 20th.

The company's also working on hardware for Windows RT, of course, Microsoft's operating system for ARM-based silicon, but don't expect to hear about any of them today: Chandhok said that devices from its partners aren't ready to show off here at Computex, although the company will have a Windows RT reference design here at the show. 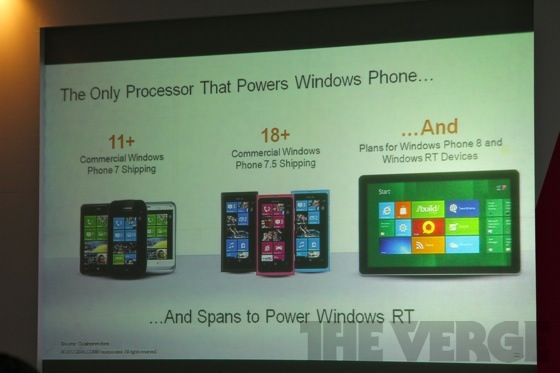 Chandhok also explained that the company is attempting to simplify its chip branding for consumers yet again: not only will there be Snapdragon S1, S2, S3 and S4 to designate leaps in power and performance, but within the Snapdragon S4 family there will be Prime, Pro, Plus and Play branding for market segments, too. You'll want to look for a Plus to get a solid smartphone experience, the Pro is for higher end tablets and smartbooks, the new Prime is the company's quad-core smart TV chips, like the 1.5GHz MPQ8064, and the Play is for entry-level devices. We're not really sure this new strata simplifies anything, to be honest — wouldn't you want a high-end chip to play intensive games? — but it is easier than keeping track of the alphanumerics. 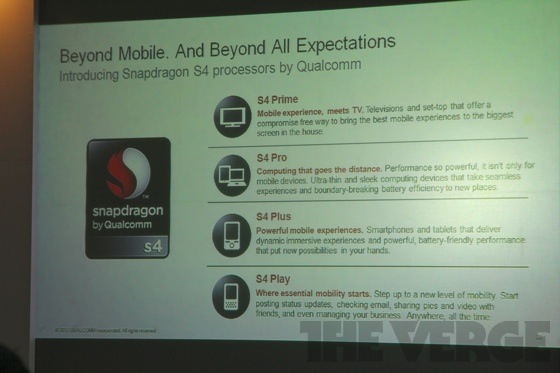