Blip Festival 2012: chiptunes move past nostalgia and into the future

Blip Festival 2012: chiptunes move past nostalgia and into the future

Blip Festival New York 2012 is one of the world's largest gatherings for chip musicians, who play using the Game Boy, NES, or other old gaming consoles.

Gaming and everything related to it is sometimes described as "nerd culture" or "tech culture," part of an increasingly broad range of topics loosely based around modern technology. But visiting New York's Blip Festival, one of the largest gatherings worldwide for chip music, is a reminder that these terms have always been insufficient. Chip music or chiptunes is a medium based around the sound chips of old game systems like the NES or Game Boy, comprised of a loose community of artists interested in pushing limited electronic systems to make anything from simple melodies to multilayered walls of sound. In the six years since the first Blip Fest, it's grown to include sister events in Japan, Australia, and Denmark, and people who come as fans often end up making music themselves or even performing at a later festival.

Chip music's star has risen along with Blip Fest. Although the medium is still seen as niche, longtime chip musicians Anamanaguchi composed the soundtrack to Ubisoft's Scott Pilgrim video game and will be performing at Lollapalooza in August. Beyond that, chiptune-like sounds are also showing up in the music of mainstream artists like Ke$ha. Anamanaguchi songwriter Peter Berkman attributes this to a maturation of the style and an increasing acceptance of it. "People just aren't as confused by it any more. People can hear a sound and just be like 'Oh, that sounds dirty, it sounds cool, it sounds like a computer breaking.' They don't have to be like 'That sounds like Level One in Mario.'" Blip Festival founder Mike Rosenthal isn't as sure. "You literally hear, on pop radio, samples of these sorts of things... I think that's more of a fad," he says. "I'm not sure there's enough overlap to really matter to the scene." He's far more excited to see festival participants make it outside chip music-specific events."The stuff that we're doing is informed by chiptunes... but it's not the entire picture."

Anamanaguchi wasn't listed in the Blip Festival 2012 lineup, but Berkman and drummer Luke Silas are still at Gramercy Theatre, stepping onstage for performances with George & Jonathan and others. Although they're in one of the medium's seminal bands, though, Silas and Berkman feel they're moving beyond even the loose label of chiptunes. They've begun including older electronic instruments along with game consoles and drums or guitars, expanding into something outside their traditional oeuvre. "Us and a lot of other artists, like George & Jonathan and Unicorn Kid, are in this fun region that's almost like 'post-chiptunes.' The stuff that we're doing is informed by chiptunes, and it's an element of what we're doing, but it's not the entire picture." It's a sentiment echoed by several of the people I meet. Chip music may always be tied to early game consoles, but there's no reason it can't also incorporate other non-traditional instruments. "You hit a point with the music hardware where there is no sound inherent to [new] gaming consoles," says Rosenthal, "but at the same time, there's more people digging into more DIY hardware like the Arduino." And as younger musicians enter the scene, they bring a perspective that doesn't include previous experience with early electronic music or gaming systems. 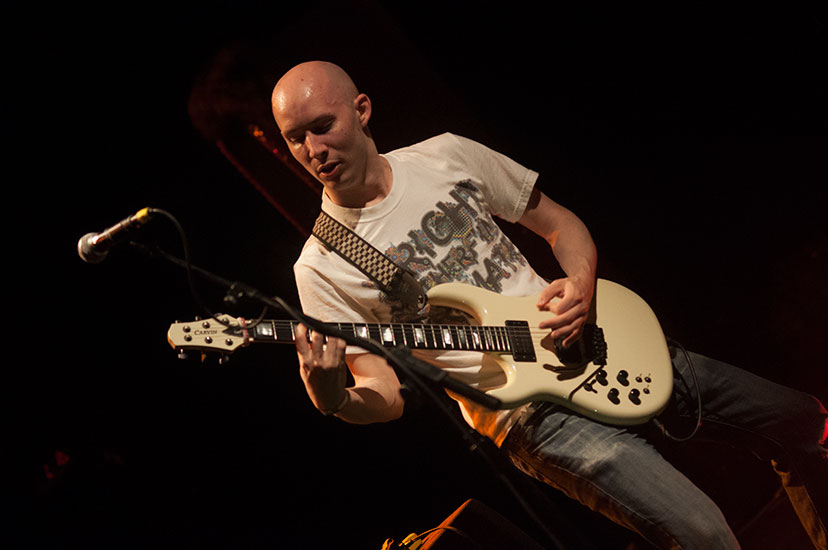 The question of nostalgia is one that almost any chip musician will have to deal with. As Rosenthal acknowledges, the scene prominently features original Game Boys or other consoles linked to the era during which many of the artists grew up. And though he points out that you won't hear any covers of game soundtracks during Blip Fest, gaming is a common entry point to the scene. Danimal Cannon — who taught a class on the Little Sound DJ Game Boy music tracker this year — started out by reverse-engineering game soundtracks and has played with Metroid Metal, which reworks songs from the Metroid series into rock arrangements. Infinity Shred, formerly known as Starscream, takes inspiration from a different type of past: their aesthetic is based on media from the age of early space exploration.

When considered along with the live motion graphics of Blip Festival's visual artists, which tend to incorporate art that wouldn't look out of place in a 1980s science fiction movie or an even earlier public service announcement, there's a certain retro-futuristic tinge to the scene. As with the more general retro-futurist movement, this raises questions about imagining the future of the past: does our love of streamlined spaceships or slick cyberpunk wire-frame models mean that we're having trouble imagining a future for the present? Damon Hardjowirogo of Infinity Shred doesn't think so. "We definitely want actual futurism," he says. "We try not to be a political band, but there is the message there that we hope for a brighter future.""It's not just nostalgia driving it."

Danimal Cannon, one of the more traditional chip musicians, is similarly optimistic about the future of his work. Unlike Infinity Shred or Anamanaguchi, he doesn't seem to be remotely "post-chiptunes;" if anything, he's looking to share his love of the limited palette the hardware can provide. He's found fellow musicians who are far too young to have played a Game Boy or Atari console growing up but are still interested in emulating the style of early game music rather than changing it completely, something he says gives him hope that the sounds themselves have traction outside of gaming. "It's not just nostalgia driving it," he says. "There's a legitimacy to it."

For other performers, chip music is simply one of many possible labels. Radlib, who played electronic music for years before learning to play on game consoles, sees himself as a mainstream electronic musician first but appreciates the simplicity of consoles and the community the movement can provide. The support that other musicians give each other can range from going to shows and buying music to teaching and discussing technique, and sometimes it reaches well beyond that, artists say. Peter Berkman, for example, tells us about fellow musicians helping Anamanaguchi replace their fried NES consoles. 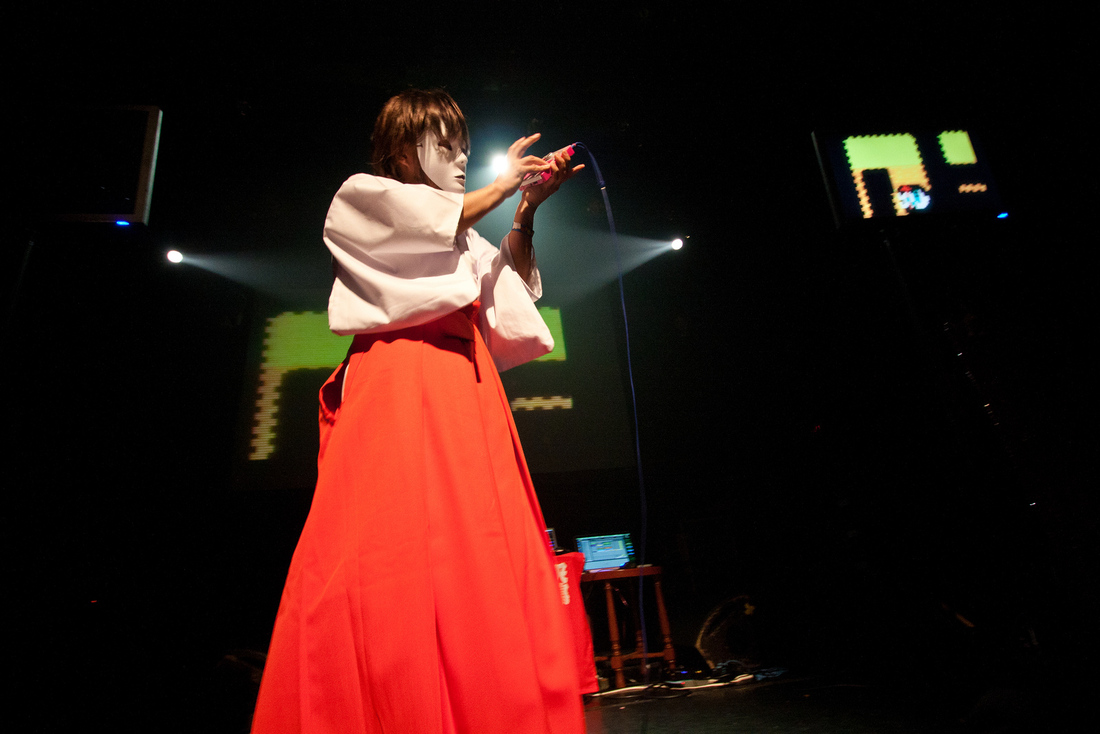 Wherever chip music ends up going, the most interesting parts of the festival come when artists step outside any standard genre. Bit Shifter plays a set of bright, tightly constructed pop with a Game Boy. George & Jonathan create a light show with a live dancer who floats across the front of the stage like a shadow. Omodaka, one of the few performers this year from outside the US, is almost hypnotic, his medium a combination of consoles, synthesizers, and samples from enka, itself a Meiji-era Japanese genre that was revived and reinterpreted in the 1950s. Throughout his show, he takes classic methods of audience interaction and calls attention to them, spelling out the reasons that what he's doing works.

"Lately we have chosen hope over fear," he says at one point, the words projected on the screen beside him. "But personally, sometimes despair comes over hope... I hate to do nothing." He urges the audience to yell along with him in order to wash away the "despair" of inaction. We don't need encouragement, of course, but the commentary on musical catharsis turns the song and the performance into something new. This kind of recontextualization is, for me, what the best parts of Blip Fest build on.