Intel's 29-inch all-in-one PC doesn't have a real name — it's just called the All-in-One concept PC — but it does have a lofty goal: showing off technology that the company is developing, in the hopes that PC manufacturers will jump on board. It offers a 21:9 aspect ratio and is attached to an articulating arm that can pivot down to an easel mode or lay entirely flat. The concept was developed with help from a number of companies and isn't ever going to be available for sale (we couldn't even get an estimate on the concept's build cost). 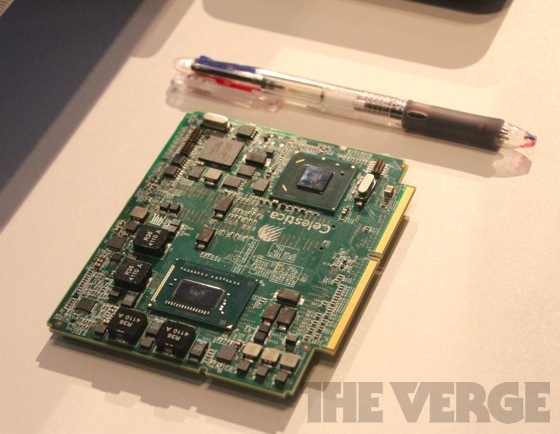 Of particular interest is a board Intel is calling the plug-in compute module, which intends to extend the life of all-in-ones by enabling speedy upgrades. The concept is very similar to Samsung's Evolution Kit for its televisions. We were told that the module could potentially host CPUs, chipsets, memory, or components like an mSATA module, and would allow users to upgrade their all-in-one by swapping out the board.

All-in-ones have traditionally been locked down to whatever components they were launched with, so this sort of technology could prove attractive to consumers who may have resisted making the jump to AIO PCs. The all-in-one's chassis also provides inductive charging, topping off the keyboard whenever you slide it up to the base. Intel's also demonstrated its InDisplay technology, which arranges all of your active windows by cascading them across your screen, in a sort of reverse-Exposé. Granted, we've seen most of these technologies before, but Intel's concept provides an interesting take on where the company sees the desktop PC headed.