Martha Stewart got up from her seat to snap a picture of the crowd packed into Milk Studios in Chelsea this morning for the debut of Airtime, the new video chat startup from Sean Parker and Shawn Fanning. Parker was the first president of Facebook, and along with Fanning, founded Napster. Airtime is their attempt at a grown-up product, a browser based video chat service, like Chatroulette, that lets you seamlessly talk with friends and people who share your interests. Unlike Chatroulette, Airtime uses Facebook Connect to ensure people's real identities and hopefully keep their pants on. You can check out our hands on with product here.

The startup has raised $33 million so far from some of the biggest venture capital firms in Silicon Valley. It recently acquired the startup Erly in order to bring on some serious web video talent, namely Eric Feng, the former CTO of Hulu on board. For now the service seems focused on peer-to-peer chat and doesn't offer the ability for multiple users to communicate like Google+ Hangouts. 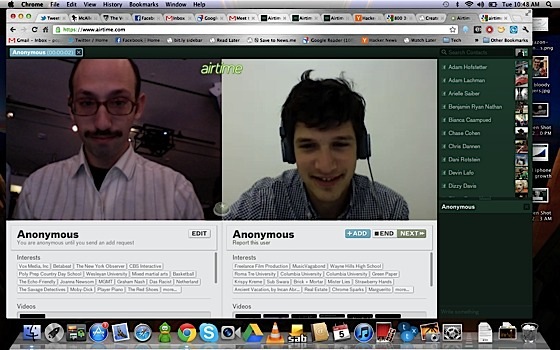 Jimmy Fallon took the stage. "Airtime is the new live social video platform! The last time these two got together they created a little thing called Napster and changed the face of the music industry. This will be the same, except Lars Ulrich won't be so mad at them."

Sean Parker arrived and told the tale of how he and Shawn Fanning met. "We were both hackers, this was the mid-1990s and we were both cyber criminals. We met in a chat room about security. We were the only two people in that world with an interest in something more than online vandalism. We wanted to start a company."

Parker opened up the presentation. "We are building a network service very different from a consumer software product. It's not something you can hold in your hand, the value is all in the connections between users."

The web, explains a series of online slides, has expanded our potential for connectivity, removed the gatekeepers and made everyone a publisher in real time. But it has also dehumanized us. "How do we build deeper connections with the people who matter to us most? And why aren't these services synchronous?"

Live, says Parker, is the only real time web. Why is now the right moment? The number one fact is the 800 million web cams that will ship in 2012, a 62 percent increase over 2011. The second is that there are now 950M broadband subscriptions which enable peer-to-peer, livestreaming video.

Because it's browser-based and uses Facebook Connect, Parker hopes the service will be relatively frictionless to join. It brings in your social graph, but hopes to help users break out of that circle by connecting users based on their interest graph, the things users "like" via Facebook. Safety is paramount, says Parker, and if you are a bad actor in the system, Facebook Connect, a team of moderators and security algorithms will be used to block nasty users.

"We don't want to reinvent the social graph, we don't want an application to download, that's an archaic model," said Parker. "But most importantly we want to bring serendipity back to the internet, everyone is a participant, and this is an environment for live performance."

Sean starts a demo. He shows Olivia Munn a Youtube video of a gopher shouting the word "Alan!" over and over again. Laughter all around. While he shows the video, Parker's image goes picture in picture. He asks her to click and drag the video over to her profile, but there is a user error. "Ooops, I broke Airtime," chirps Munn. Ok, back in business. The Youtube integration seems to work pretty well, but its not clear if you can record and post video, or just share it.

The one thing Airtime has going for it is smart integration with Facebook, which makes the serendipitous act of meeting new people more interesting, since you can choose them based on a similar interests, location or overlapping social graph. And it has a list of trending topics that may inspire people to connect around live events like sports and concerts. But the event was full of technical glitches, and while the image quality was a little better, Airtime didn't show technology much different from Chatroulette, Skype or Google+ Hangouts. Overall the live demo served mostly to highlight Sean Parker's star-studded rolodex.