Broadcom announced that a refreshed Asus G75VW gaming laptop will be the world's first with 802.11ac "5G Wi-Fi" connectivity.

In the past few weeks we’ve seen announcements for 802.11ac chips and routers, but computers that can actually take advantage of the new networking standard have been eluding us. Today at Computex, though, Broadcom VP Michael Hurlston announced that Asus's G75VW gaming laptop will handle the new networking standard, bestowing it with the title of "World’s first 5G Wi-Fi laptop." Since the G75VW is listed on Asus’s site as only having 802.11n, the two companies must be alluding to a product refresh. The new laptop will be available "very shortly," said Hurlston, and thanks to the increased bandwidth from dual-antenna MIMO support, will be capable of theoretical speeds in the 800–850Mbps range. 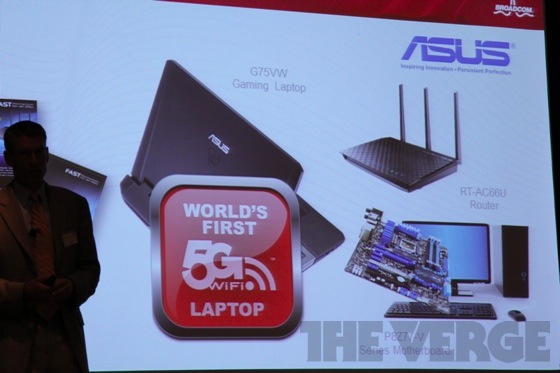 The Broadcom VP also drew attention to more 802.11ac-capable products coming from Asus, including a P8Z7-V series motherboard, and the RT-AC66U wireless router we heard about on Monday. Before leaving the stage, Hurlston mentioned that we’ll be seeing smartphones, tablets, and even cameras with the new networking standard in 2013.