An Ivy Bridge too far? AMD may have finally lost the battle against Intel's juggernaut

An Ivy Bridge too far? AMD may have finally lost the battle against Intel's juggernaut

AMD is losing the battle to offer real competition to Intel's Ivy Bridge CPUs, and the consumer might be the one who feels the resulting pain.

Welcome to Computex 2012, the coming-out party for Intel's Ivy Bridge CPU refresh and Microsoft's Windows 8 operating system. The two halves of an irresistible hardware-software combination that has dominated the PC world for so long that it has its own nickname — Wintel — came together in Taipei this week to once again reaffirm their supremacy. And AMD just stood on the sidelines, watching and scratching its head.

Think about all the marquee devices launched by the likes of Acer and Asus at this show — were any of them AMD-based? The day-zero media blitz from the local Taiwanese vendors and their international competitors was almost exclusively Intel-powered, and where it wasn't, it was because ARM-based processors were starting to encroach upon traditional x86 markets. AMD was a total absentee.

Missing the furious race for attention that characterized the opening of Computex may have been a viable gambit for AMD, had the company been holding back exciting new devices of its own to announce at today's keynote, but that was not to be. In fact, AMD's presentation this morning might have been a rerun from last year's Computex outing: "a number of design wins" were touted, some benchmarks showed off the better battery life that Trinity purportedly offers relative to Ivy Bridge, and the new Brazos 2.0 low-end APUs (Accelerated Processing Units) were announced. 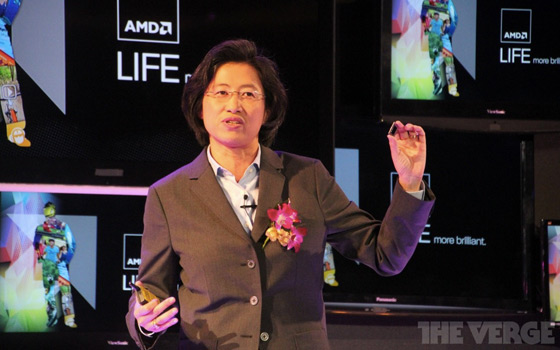 The problem is that AMD is writing a sales pitch to OEMs while Intel is busy promoting a plethora of new devices already using Ivy Bridge. Gently refreshing your portfolio the way AMD is doing is more befitting a company at the top of the heap rather than one struggling both in terms of market share and financial performance.

"APUs are new. I want to show you what APUs can do."

What's most alarming about the state of AMD's affairs today is the company's weirdly hazy memory. Dr. Lisa Su, Senior VP and General Manager of AMD's Global Business Unit, said without a hint of irony that "APUs are new," which was echoed by company CEO Rory Read's claim that they are "the right product at the right time." If by "new," AMD means they have seen almost no market penetration, have engendered little to no consumer interest, and project to struggle against the market leader, then yes, by all means APUs are new. But they were also new, in that sense and the more commonly accepted one, this time last year. AMD's failure to advance the narrative, if not the performance of APUs, has to be disturbing for anyone interested in seeing a balance of power in the x86 processor space.

Intel has been in the ascendant position for way too long, and today AMD is lagging on pretty much all fronts — whether you're talking souped-up high-end enthusiast gear or low-power mobile chips. If we didn't have Qualcomm, Nvidia and others making the Windows hybrid device market interesting with their ARM-powered Windows RT-friendly chips, we'd all be staring down the gun of a whole hardware cycle whose prices and progression are dictated by Intel alone. 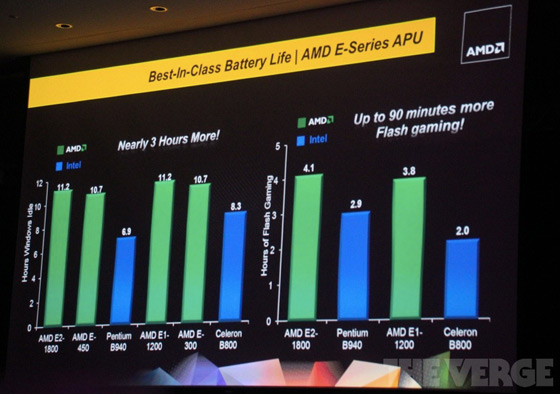 The reason why today feels a lot more dire for AMD than its recent history is that we've seen what the company has to offer: we've seen the Trinity line that aims to fight off Ivy Bridge and the fact that it doesn't truly have enough to set it apart, and today we saw the somewhat misguided new Brazos line of chips, which AMD opted to compare against Intel's Celeron lineup, waging an anachronistic battle for a netbook market that no longer exists.

Windows 8's arrival raises the stakes of this particular hardware generation even higher. This autumn will be a boom period for purchases of new laptops, desktop, hybrids, sliders, transformers, and tablets, and the market-stimulating effects of Microsoft's new OS launch look likely to benefit Intel most of all. The ARM upstarts will have a unique sales pitch to offer and will find their niche in the market, but AMD's is stuck competing with Intel on Intel's favorite battleground, and this time it may not survive the fight.

Nate Ralph contributed to this report.

More from this stream The best of Computex Taipei 2012