Beyond the role libraries can play in community-building and accessibility, they remain fantastic curators even in an age of plentiful information. Biblion, a free magazine-like app that brings New York Public Library exhibits to the iPad, became a shining example of this when it debuted last year. The first edition explored the 1939 New York World's Fair with explanatory essays, historical documents, and photographs that previously sat in the archives or were available only to people who could visit a local exhibit. Biblion won wide acclaim, garnering recognition from Apple as a top educational app.

A year later, NYPL is following up with a second volume, this one based on Mary Shelley's classic Frankenstein. As a longtime fan of the book, I was excited not just by the prospect of new material but by the remaining fragments of an original 1816 draft of Frankenstein, borrowed from Oxford's Bodleian Library and digitized. So is this app as good as the last Biblion edition? With a few exceptions, it's certainly a worthy successor.

We've talked before about annotated books, but Biblion is more like a gallery exhibit crossed with the supplementary packaging of a Criterion Collection film. Unlike a traditional essay collection, it focuses on shorter pieces organized into four thematic sections. If you don't have an iPad, you can view it online here. There doesn't seem to be as much archived information as on the World's Fair app (Frankenstein isn't even from this continent, after all), but it's still a big app, peppered with posters, playbills, etchings, and other media. The interface itself is more intuitive than before, organized like a set of folders full of papers you can flip through and examine. Viewing it in portrait mode shows you essays and galleries, and turning it to landscape brings up the primary sources, in this case Frankenstein and some poems, correspondence, and diary entries by people in Shelley's social circle. Generally speaking, there's less to see this time around, partly because it's focused on a single book rather than a year-long event. 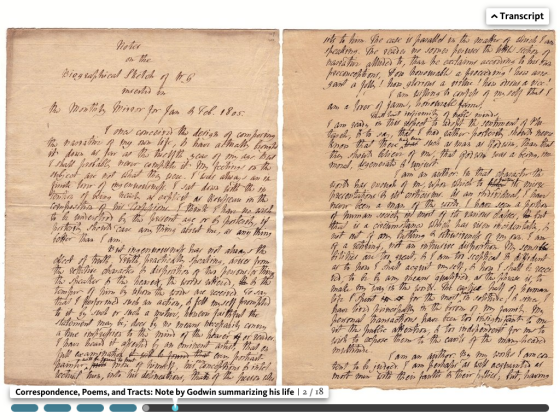 Going into the app, I was most excited by the idea of reading an original manuscript, but I deeply underestimated how difficult it would be to decipher nearly 200-year-old script on the iPad's display. Even scanned in decent resolution with a zoom tool, there's just no way around the lack of contrast and tiny lettering. So while the primary sources are a good backbone for the app, they probably won't be what most people spend their time on. If you do decide to wade through them, it's fascinating stuff. Tapping the "Transcript" button toggles between the manuscript and a typeset 1831 version of the novel, so you can compare the two page-by-page. The handwritten text gives a great sense of Shelley's flow while writing, something that the advent of the word processor made nearly invisible.

A book within a book: essays show up in portrait mode, primary sources in landscape

Back in portrait orientation, the new material is generally very strong. Some is standard annotative stuff: you'll see Mary Shelley's family tree, biographical data, and background on the theory of electric galvanism and Shelley's fateful trip to Lord Byron's villa, where she started writing Frankenstein. It's not anything that couldn't be conveyed in printed text, but the link-based organization makes it more approachable. There's also a wealth of criticism and commentary. "Cultural Interpretations of Frankenstein" is a broad but compelling social history of the novel. "Blind People Can Be Mean, Too" looks at the "misbegotten pity" for Frankenstein's saintly blind character, and "In Prison: 'We're the Monsters'" is a book discussion between inmates at Brooklyn's Metropolitan Detention Center. Other essays describe the impact of the story on debates about racial equality (slaves were compared to the Creature, "created" by their owners but kept ignorant and therefore dangerous), technology, and the idea of progress. Though similar work has been printed elsewhere — "Cultural Interpretations" seems based on the author's book Frankenstein: A Cultural History, for instance — it's hard to beat as an introduction to almost any facet of the novel.

There's so much in the app that it becomes difficult to sort through at times. The interface is rich but a bit confusing: even after skimming through the instructions, it took me a while to find something as simple as my bookmarks. It crashes occasionally, and if you're actually reading the primary sources, switching between them and the essays or galleries resets your page with no apparent way to bookmark the original text. Frankenstein is no doorstop, but reading the handwritten manuscript is difficult enough without having to find your place each time. 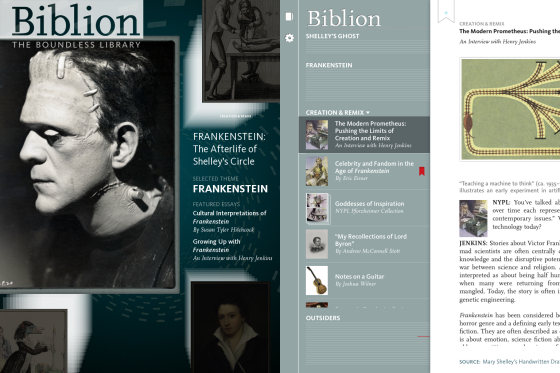 Sadly, the most significant addition to the new Biblion app interface may be the least useful. NYPL has added "social" features, a worthy but ultimately failed attempt to generate the kind of discussion you might get at a good show opening. While reading, you'll have the option to pose a question to the Biblion audience at large, and selected open-ended questions or polls will be featured in the app. Although the questions and answers are often good (they're also wisely screened by NYPL before posting), there's no sense of dialog, just people offering opinions. I'm interested to learn that someone considers "greedy financial, corporate, and political systems" modern-day monsters, for example, but there's no opportunity to start a conversation about it. The blunt yes / no polls are even worse. At the same time, social interactivity is a noble experiment, even if I'm not convinced it's ever really going to work.

I'd have felt like a cad condemning a free library app, so it's all the better that Biblion doesn't disappoint. Despite treading more limited ground than the first outing and apparently working with less raw material, it provides an illuminating and comprehensive look at something that's bound to have wide appeal. I'd obviously love to see Android tablet support, but the lack of it is understandable, and everyone can at least access the content online. And while it's a great app in its own right, perhaps the best thing about Biblion Frankenstein is that it suggests we'll be seeing more volumes from NYPL in coming years.