In another move to replicate its desktop experience on mobile, Facebook today announced a few key security features for its mobile website and mobile apps, like code generator, password recovery, and report spam from mobile devices.

In another move to replicate its desktop experience on mobile, Facebook today announced a few key security features for its mobile website and mobile apps. First, you can now report offensive or spammy posts and pictures within the app and mobile site — within the action button menu in the top right corner of every story is a new "Report/Mark as Spam" button. Anything you report as spam will of course also take effect in the desktop version of Facebook.

There's also a new Code Generator feature for Android that lets you verify your identity in order to use Facebook on a new device, even if you don't have cell service. Code Generator pipes a code to your device through the app itself, which you can enter right back in to the app. When you receive a Facebook "Login Approval" email, it will be easy to tell if an unauthorized user is accessing your account, since the code changes every thirty seconds.

Lastly, Facebook improved its mobile recovery workflow so you can lock down your account, change security settings, and recover an account using password hints straight from your phone. Even the company's "Social Authentication Tool" (which asks you to name the faces of your friends) works in the mobile app. Previously, these advanced security features only worked in the desktop version of the social network, which suggests that Facebook's committed to providing a consistent desktop on desktop and on mobile, a far faster-growing segment of its user base. 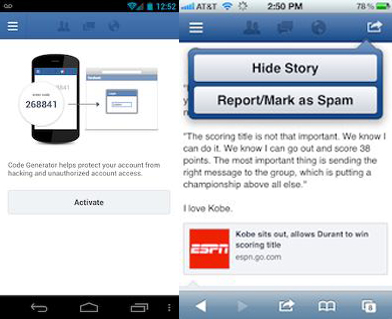