Barnes & Noble has filed a comment with the US Department of Justice objecting to the government's proposed settlement with Apple and a number of book publishers.

Barnes & Noble today filed a comment with the US Department of Justice objecting to a proposed settlement in the government's price-fixing lawsuit against several book publishers. In a 26-page document, the retailer slams the DOJ for attempting to regulate an industry "that it little understands." B&N asserts the settlement as it stands now is "overboard" and would ultimately see American consumers come out on the losing end — forced to endure "higher overall average e-book and hardback prices and less choice, both in how to obtain books and in what books are available."

While the DOJ alleges that the agency model agreed upon by Apple and publishers has caused ebook prices to rise across the board, Barnes & Noble tells a considerably different tale. It paints the early days of the e-reader industry as a bleak period which saw Amazon catapult ahead of competitors thanks to its wholesale pricing strategy. When the bookseller launched its Nook hardware (and companion ebook store) in 2009, Amazon enjoyed more than 90 percent of ebook sales, and B&N claims it lost "substantial money" as it struggled to remain competitive with the online retailer's below-cost $9.99 titles. Ultimately the court filing reveals that the company was failing to gain significant market share, fortunes which changed for the better with the introduction of agency agreements.

The young ebook industry "became more competive" in 2010, says B&N, when publishers and distributors embraced the agency model — thus avoiding a market controlled by "a single dominant player." It provides charts that demonstrate as much, with data showing that the average ebook price (weighted by units sold) has gone down since agency agreements were put in place. B&N isn't shy when it comes to crediting the model for allowing competition in the market to thrive. As it and other ebook distributors like Apple have gained momentum, Amazon's share has been cut to 60 percent. 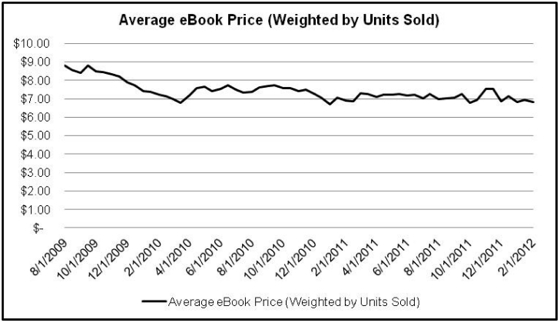 Those positive results apparently extend to hardcover pricing, which B&N points out has also dropped over the last two years. Further, the retailer points out another benefit consumers have experienced during the agency period: any delays between new books hitting shelves and their ebook versions arriving online have all but evaporated.

Throughout the filing, Barnes & Noble doesn't seem to take issue with the Department of Justice punishing anyone found guilty of price collusion — and there seems to be plenty of damning evidence depicting just that — but the company appears resolute that sacrificing the agency model is the wrong way to go. Through the eyes of the Nook creator, it's a "solution" that would hurt consumers and ebook distributors alike. Barnes & Nobile warns that such a drastic step will particularly devastate brick-and-mortar stores, relegating them to act as "free advertising and [book] showrooms" that are bound to collapse trying to compete with Amazon's wholesale pricing structure. The Justice Department has said it will respond to all comments in a future filing with the court.