The National Republican Congressional Committee put together a little internet campaign earlier yesterday that met with a conclusion so predictable that it's difficult to believe the NRCC didn't see it coming.

Last night, a series of stories hit the internet about a National Republican Congressional Committee online petition that went "horribly wrong." The campaign went a little something like this: after clicking a QR code, users were taken to a new Tumblr site where they could see a fast-paced YouTube video, sign an online petition to repeal "Obamacare," and then watch a live Ustream video of their signature being printed out. Behind the scenes, that printer received its data from Dropbox and used some Python to check for users' Klout scores — if they were high enough, the printer had its own Twitter account and would tweet out a thank you message. It was all unfiltered.

Then the inevitable happened: the combination of internet anonymity and internet publicity resulted in what that combination has always resulted in: trolling. Specifically, users realized they could get anything at all to print on the livestream and so got names like "Weedlord Bonerhitler," "Jiggly Puff," and "HelpI’mStuckInthisPrinter" displayed for all to see. As the real names ceased and the fake names started rolling in, occasionally a hand would whisk offending pages away. Eventually the livestream was shut down — the last thing to be displayed was the improbable name "Bruce Dackler."

The result after the brouhaha is that the story has gone viral: hitting many sites across the web that would have never covered the story otherwise (and yes, this site too, now). Most of these have noted how bone-headed the whole idea was and how inevitable the outcome was. Why didn't the NRCC see that? Well, it did — of course the NRCC knew it would end up like this.

"We were all sitting around watching it, laughing hysterically."

We spoke with the NRCC's new Digital Director, Gerritt Lansing, who told us that when it came to the inevitable trolling, "Absolutely, we expected it." The idea that a team savvy enough to create an automated system of QR codes, YouTube, Ustream, Tumblr, Python, Dropbox, Twitter, and Klout was completely ignorant of how such a system would actually work on the real internet doesn't make much sense. "The surprise on our end," Lansing told us, "was that we were live for over eighteen hours before it was taken over." 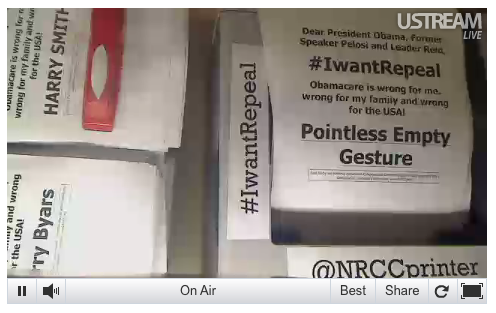 The petition to get the healthcare plan repealed, of course, in and of itself isn't going to be effective — but the assumption that the petition was the primary goal is wrong. The number one goal was to "collect emails and gain assets for people who are committed to repealing Obamacare." The NRC achieved that goal, having collected "four to five thousand good, new emails."

If the goal was to collect emails, then the way to do that is drive traffic to the petition. One way to drive traffic is, well, to go viral by any means necessary. While Lansing says the trolling wasn't part of the strategy, he admits that "anyone who is running a well-coordinated campaign like this has to expect it and we certainly did. It's all part of the game that exists in the media world today." The shift from genuine engagement with supporters to dealing with trolls didn't give the NRCC heartburn at all. "We were all sitting around watching it, laughing hysterically. All those names were really funny."

"When the other side takes it over [...], they're having your conversation on your terms."

The extra attention surely drove some extra traffic, but it also launched a conversation on Twitter about the campaign. Here, again, what may have looked like a loss for the Republican campaign on the surface was actually a win from Lansing's perspective:

I think there's a common misconception about how you win a Twitter hashtag war. The fact is if your hashtag in your rollout isn't good enough to take over, it's not worth doing in the first place. At the end of the day, when the other side takes it over successfully or not successfully, they're having your conversation on your terms. If a bunch of the left is using "#IWantRepeal" yesterday, I think that's a great success no matter what happened.

What about Bruce Dackler? We were unable to track down who he is. It's hard not to be a little suspicious of the name's rich anagram potential and lack of internet presence. Lansing also believes he's not a real person: "I'm actually a little disappointed. I was hoping we could have turned him into a resource."

leaving work after a long, entertaining day. 2 things i know to be true: #I(still)WantRepeal and Bruce Dackler is the man.

It's probably a safe bet that Bruce Dackler will live on. Lansing says that "We're working on the next phase of this petition drive, so stay tuned." Before yesterday, Bruce Dackler didn't exist on the internet. After today, he should be a reminder that when something on the internet looks like a fiasco, that doesn't mean it wasn't part of the plan.