There are plenty of PC hardware components on display here at Computex Taipei, but Noctua is demonstrating a fan with integrated active noise-cancellation, a curio too novel to pass up. The technology was developed by Rotosub, and consists of a microphone, a metal band around a PC fan's frame, and a signal processor. The microphone captures the sound being emitted by the fan, feeds that data to the signal processor, which analyzes the noise and toggles magnets built into the tips of the fan's blades.

The idea is deceptively simple: active noise-cancellation involves pairing a sound wave with one of identical amplitude, but inverted phase — the noise and anti-noise effectively cancel each other out. As the magnets in the Noctua prototype react to the band around the fan's frame, the blades vibrate imperceptibly (at about 0.1mm), generating sufficient anti-noise to counteract much of the noise the fan is making. 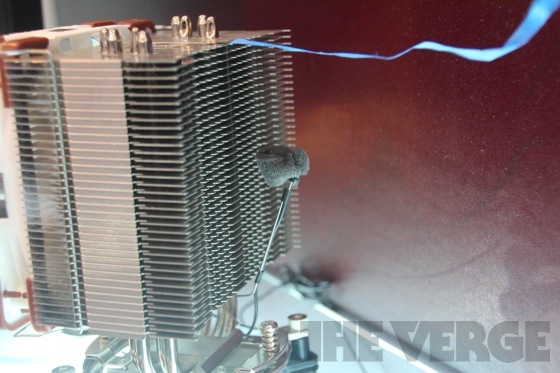 The prototype was built onto Noctua's existing NF-F12 fan, and there's still another 12 to 18 months of development time left. The company has plans to improve the airflow and potential fan speed, ideally without impacting the noise level. There's no firm price set, though Noctua expects the fan to be about twice as expensive as their current $20 - $25 models. There's also the matter of space: the signal processor and microphone will need to be integrated into the fan for a truly compact solution, a feat the company estimates will take another two to three years. The noise-cancelling fan should arrive around the end of 2013, and will likely build the mic and signal processor directly into one of Noctua's own heatsinks — if you've got a heatsink model from another brand you're especially partial to, this may be a deal-breaker. It's a bit hard to get an idea of how the fan handles on Computex's noisy show floor, so Noctua provided a video so you can see the prototype in action.