Facebook has allowed its users to post through Twitter for a long time, but an important update this week tightens the integration with better support for Twitter images, hashtags, and usernames. This update is notable not only because of the added context that these inclusions provide, but because Facebook is willingly sending people away from its social network to another.

After some testing, we've found that the integration works well enough, but there are some instances where it falls down. For example, in the picture below there is a comma at the end of a username that confuses the linking algorithm that Facebook has implemented, but the same tweet appears fine on Twitter. Otherwise, pictures embedded in tweets appear just like their Facebook status counterparts, and hashtags direct to Twitter's search page as expected. 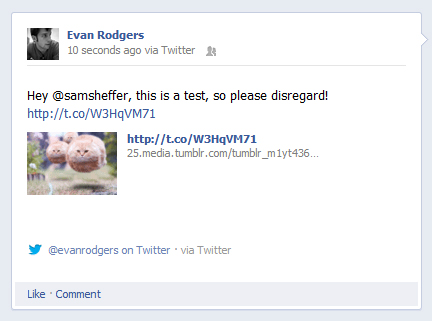 To implement this functionality you'll have to edit the settings in your profile and connect with Facebook and agree to its routine permission prompt. After that you'll see all of your tweets appear as statuses in Facebook. In our tests it took a couple tries before the Facebook association would take, but after giving it a moment it began to work as it should. Even with minor issues, the integration is miles ahead of Google+, which requires Facebook and Twitter to export their contacts back to the service if they import a user's Gmail contacts, something Facebook sees as a privacy problem.