Skeuomorphism. Skeuomorphism. SKEUOMORPHISM. Sick of it? I can't go more than a day on the internet, let alone The Verge, without reading about this obscure little design principle, so I tried to find out what all the fuss is about. This is a debate that will likely never end, but Apple is at the middle of a leather-stitched, toggle-switched storm right now, and here's my take on why.

Believe it or not, skeumorphism has been around for a lot longer than Apple. Good old Wikipedia defines a skeuomorph as 'a derivative object that retains ornamental design cues to a structure that was necessary in the original.' Think of fake rivets on denim jean pockets, why not just stitch? Also believe it or not, skeuomorphism has existed in Apple's software before iOS. What's less surprising is that it appears to rear its ugly, overly complex head with the arrival of one figure: Scott Forstall.

According to BusinessWeek's lengthy profile on Forstall, in OS X he was "a leading designer of the Mac’s new user interface, dubbed Aqua". Now Aqua in itself was largely inoffensive, and looked good alongside Jony Ive's colourful iMacs. What came out of OS X's design language, however, began to shift away from Apple's digital revolution. Decidedly analog design language crept into new features such as Dashboard, with its classic calculator and shadowed, yellow sticky-notes. 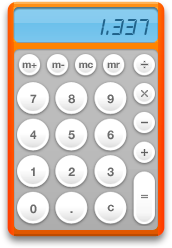 While it might seem absurd to criticise such a small widget that apparently serves its function, it is a good early example of the downsides, and advantages, of skeuomorphism. It is true that anybody could identify such a widget as a calculator, thanks to its layout and traditional cues, but features such as small, difficult to click buttons and faux-LCD display don't lend themselves to modern trackpads or high resolution screens.

The real explosion of skeumorphism at Apple has come in the many iterations of iOS, again under the direction of Forstall. Thanks to the millions of iOS devices sold all over the world, Apple products are no longer only used by those in the know. Once the best kept secret of ever stereotypical creative professional in the land, Apple products are now used by a vast majority who are either simply technologically uninterested or even completely averse. iOS needs to be simple and straightforward, but Apple's interpretation of this seems to be implanting obscure, outdated reference points into interfaces in order to indicate the purpose of an app. The faux leather and stitching are often quoted, but the extent of this antiquation was really driven home by Apple's new podcasts app.

Apologies for the iffy-GIFs, but compare Podcasts to the third party app Instacast here. Where Instacast (bottom) takes up barely a third of the screen with additional controls, Podcasts (top) uses nearly the whole screen to display the same options. The use of a reel to reel tape deck (from the 1960s!?) and the tortoise and the hare (do Aesop's fables really have a place in 21st Century design?) succeed in illustrating the functionality of the app, but do so no better than Instacast, and have the unfortunate trade off of eating up the scarce 3.5inches of screen. With the smaller screen of the iPhone, economy of design is essential in order to provide as much functionality as possible, and it is here where Apple is falling down, creating complex visual analogies where they are simply unnecessary.

A ray of hope?

One key figure remains in Apple, however, who has the potential to reverse this trend, and make Apple's interface design as innovative as much of the rest of the company. Jonathan Ive is famed for his devout adherence to the design principles of Dieter Rams, which include such gems as

When questioned on skeuomorphism, Ive has been typically guarded, telling the Telegraph "In terms of those elements you're talking about (the dreaded leather stitches again), I'm not really connected to that." His most famous hardware designs, however, mark a stark contrast to Apple's latest software. Think the G4 iMac, or the original iPod Nano. Their design was never excessive, it was always just enough. The trouble with skeumorphism is that it projects ancient functionality onto a modern object, imitating its possibilities. Apple's podcast app is so much more than a glorified tape player, but many users will only view it as such. Ive summed this up well a number of years ago, when he was quoted as saying "The defining qualities (of Apple products) are about use: ease and simplicity. Caring beyond the functional imperative, we also acknowledge that products have a significance way beyond traditional views of function."

With skeuomorphism, it becomes impossible to look beyond traditional views of function, because a calendar is only ever a digital, leather bound booklet, and most ebooks remain just a collection of words on virtual pages resting on a shelf made of virtual wood, rather than something truly interactive, with words, pictures, graphics and more. While skeuomorphism may only be an unattractive annoyance today, it has the potential to prevent development and innovation tomorrow. Jony, you know what to do.